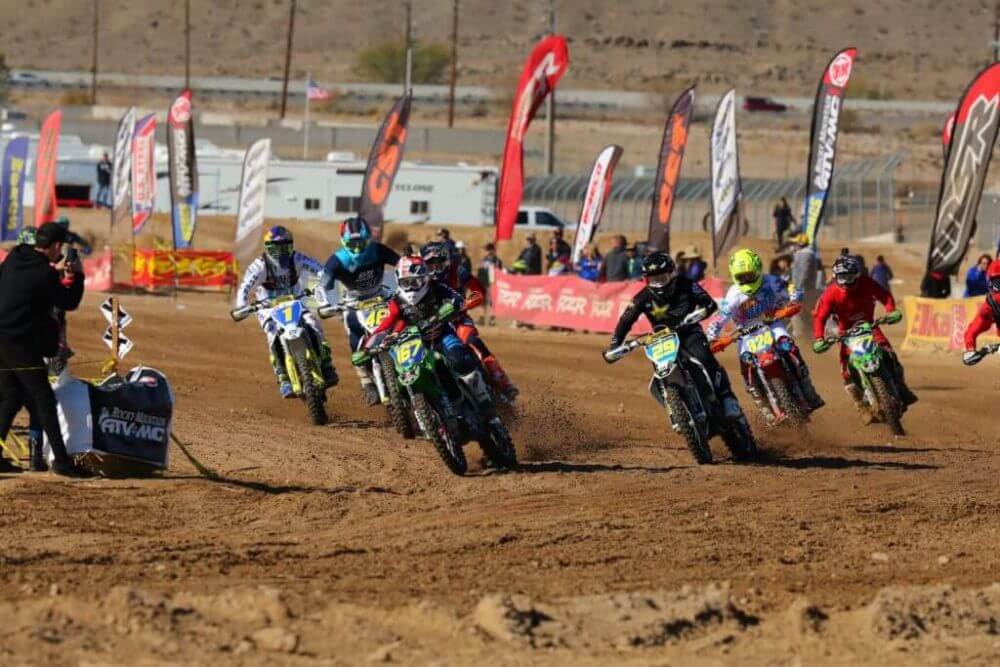 Midweek rains made for near perfect conditions at the 2019 WORCS series finale. The final WORCS event of the year featured a long, fast racecourse that wound through the flat, desert terrain surrounding Primm, NV. In an effort to add some technicality, the WORCS crew added a tricky rock section for Sunday’s two-hour main event. In the section, riders would have to traverse a rock-covered embankment four times before heading back out into the high-speed, choppy sand. Riding a wave of momentum, Chaparral Motorsports, Precision Concepts, Kawasaki’s Zach Bell was aiming to end the season in winning fashion. His stablemate, Blayne Thompson, was likewise looking to finish strong; Thompson had finished on the podium when the 2019 WORCS season opened in Primm.

The lack of a starting gate meant a green flag wave would signal the dead-engine start for the pro race. Zach’s KX450 instantly ignited and he headed into the first turn with the lead. Through the first corner, Bell ran a little wide and series champion Taylor Robert snuck inside to take the point position. Not long into the lap, the riders headed to the added rock section. Just before getting to the rocks, Andrew Short pushed Zach back to third. The move didn’t last long, however, as Bell was able to overtake both riders up a rock-littered embankment. From there, the Kawasaki rider set sail. With each circuit of the course, Zach would stretch away from the field between ten and twenty seconds. By the finish, he had amassed a lead of over three minutes, taking an impressive win and securing third place in the championship standings.

“I started off yesterday with the fastest qualifying time, which gave me a lot of confidence coming into today. [WORCS] threw in a big pro section with a lot of rocks [for the pro race]. It was a little scary for me, coming from the supercross and motocross background. But I got off to the holeshot. Then, I got passed immediately by Taylor [Robert]. And then Andrew Short passed me right before the pro section. Then, I actually passed them through the rocks, which was a little surprising to me. From there, I put in some blistering laps. I knew [the field] probably wouldn’t be able to keep up with those [lap] times, with how I felt and how good the bike was handling today. So, I just put my head down and pushed as hard as I could. Ultimately, that made [Taylor] have some mistakes that cost him a lot of time. That gave me a very good advantage so I could just click my laps off, focus on me, and enjoy the race.”

Thompson had a decent start to his race, heading through the first run just at the edge of the top-five. Over the first couple laps, mistakes in the rocks would push Blayne back to eighth. After those initial mistakes, the KX450-mounted rider would rally and began picking off the riders ahead of him. After passing the likes of Dalton Shirey, Andrew Short and Giacomo Redondi, Blayne found himself closing on the third-place rider: Gary Sutherlin. Thompson was pushing hard to close the gap for the final podium position, but unfortunately, the fast, choppy terrain would catch him out. Just before the hallway mark, Blayne suffered a wicked crash, badly injuring his hand in the process. Unfortunately, Thompson couldn’t continue, but would finish the race in thirteenth on account of laps completed.

“I got off to a decent start. Early, I made a couple passes. But then the first lap in the pro section I got passed by a few people. I wasn’t taking the line I should have been. On the second lap, I found the good line [through the pro section] but still fell over and ended up getting passed again. After that, I was able to get [Ricky] Dietrich back. Then, I think lap three, I got Dalton [Shirey], too. A couple laps later I was able to get by Giacomo and closed right up to Gary. Then, we pitted and after that I was pushing a little too hard trying to catch back up to Gary. I had a little issue and did something to my thumb. Other than that, we were having fun. So, now we’ll get [my thumb] checked out and go from there.”

“Our team had a mix of high and low at the WORCS finale in Primm. The obvious high was Zach’s ride; it was downright impressive. He’s incredibly comfortable on his KX450 at the moment and it shows. I was also delighted at how he was able to improve and adjust in the rock section during the race.

“On the flip side, I’m so bummed for Blayne. He had the makings of a well-earned podium effort going. It was great to see him finding the form he’s capable of. Unfortunately, this sport can be unforgiving and he suffered the crash. Hopefully, his thumb injury won’t be too bad and he can get back out there soon to keep building.”