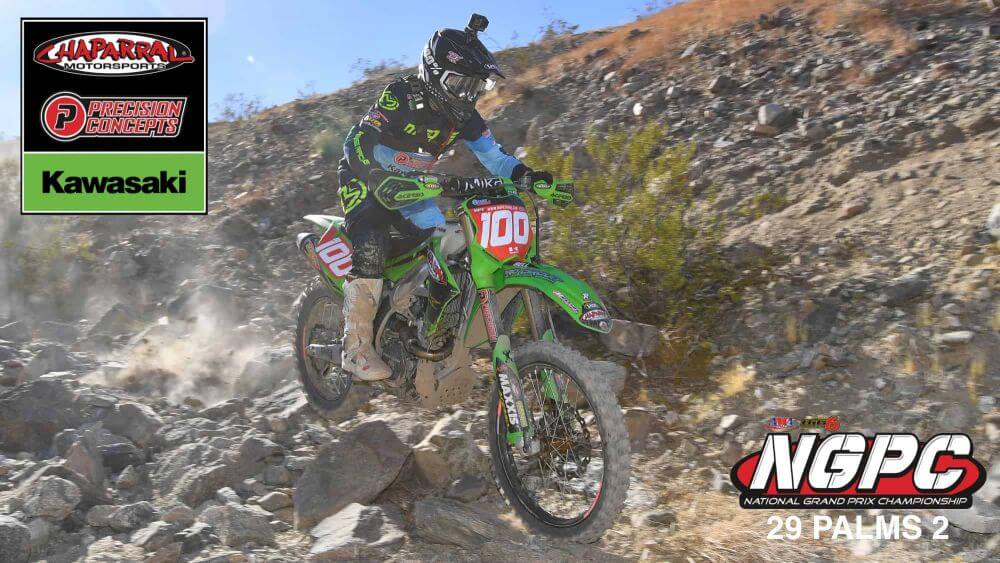 As the 2020 racing season nears its conclusion, the PC Kawasaki team made the trek back to 29 Palms for the penultimate NGPC round. The hosting Hilltoppers club made a few changes to the course for the second go-round this year. First, they changed the direction of, and redesigned, the motocross track. In addition, the club tried to reign in the speeds some by cutting in a tighter section of course. They, additionally, bypassed the asphalt straightaway, which would typically see speeds upwards of 90mph. Lastly, the newest addition was a technical, rocky downhill canyon, which was added to the track as a pro-race-only section. In spite of the changes, one thing remained constant: the gravel, rock-filled roost of 29 Palms is quite painful! Therefor, everyone would be striving to get out front early.

As the line of 450 Pro riders awaited the green light to release them onto the course, the field built a thunderous crescendo of rpm’s. Just before the light lit green, Zach nearly jumped early, but was quick to pull his clutch back in so as not to false-start. Just as he did, the light flashed green, which hindered Bell’s jump a split-second after correcting himself. Though Bell was behind from the jump, his KX450 rocketed down the start straight. As a result, Zach was still able to own the first turn and come away with the hole shot. From there, the Team Green ace set about clicking off his sprint laps, setting a blazing pace that no one could match. Zach quickly built himself a comfortable margin and was able to settle into a smooth, but fast flow. Through an hour of racing, and the pit stop rotations, Bell had built over a minute’s lead. He continued to pull time to the finish as he took a commanding victory, his second in a row in the NGPC series.

“The weekend went really well. Saturday was good in the AA race. [In the pro race] I got off to a good start and put myself in the lead. From there, I was really able to execute my laps and really feel like myself out there. I feel like I’ve been getting stronger and stronger each weekend. My routine’s been to have less time on the bike during the week, just so I can be stronger for the weekends, and I feel like that’s really helped. It’s good to ride during the week, but with the schedule, it’s really been key for me to take the time to recover in between rounds. So, I’m excited to keep improving. This weekend was really good for me again: another first place in the NGPC series. So, I’m just looking to keep building and getting ready for next year.”

As the green light released the line of Pro 2 riders to scream down the start straight, Alvarez was slightly pinched. He did a good job to recover and salvage a top-ten start. However, JP’s work was cut out for him with such a talented roster of 250 Pro riders ahead of him. Quickly, Alvarez set to work moving forward through the field. In an impressive display, he was able to rifle through the pack on the first lap to third place. From there, the Kawasaki rider put pressure on Tallon Lafountaine for the second position. When LaFountaine took a slower line through the rocky pro section, JP capitalized and made the move into second. Over the course of the next couple laps, JP was on pace with the leading Mateo Oliveira, but just wasn’t quite able to close the gap. In this time, Lafountaine had remounted a charge. On the motocross track, JP made a slight mistake, which allowed Tallon a route by. After settling into third, Alvarez continued to click off fast laps, distancing himself from the pack of riders behind. He continued to ride strong to the checkers, garnering another podium finish on the season with a third.

“Overall, I feel ok about the day. I wanted to come in here knowing I could win and I had that mindset. I think I got a seventh- or eighth-place start. So, I had to make my way through the pack. I think I got up to third on the first lap. At one point I got into second. But then Tallon got into his groove and just got by me. The bike was great today. I couldn’t have asked for a better setup. And my body felt strong, but a few mistakes happened, and it just wasn’t my race today. Nothing was really holding me back out there. I think I could have gone a little quicker in the corners. But Mateo and Tallon were just on it, and I just wasn’t today, I guess!”

Clay came into the weekend full of confidence and ready to shine in his first ride on the new KX250X. In Saturday’s 250 AA race, Hengeveld showed that he’s getting closer and closer to his previous best, as he ran at the front of the field and finished a strong second. In Sunday’s Pro 2 main event, Clay got a great jump and entered the first corner inside the top-three. He quickly locked himself into third place and looked to push forward further. Unfortunately, just a few corners into the race, something happened to Hengeveld’s power plant. Though the team worked on the bike in the pits, they couldn’t get Clay back out on track and he was forced to take a DNF on the day.

“Zach was next-level out there today. I could see it in his body language that he was feeling strong and really confident. Days like that, where the bike is working great and your body feels good, are such a joy to be a part of. It’s great to see Zach getting better and better each weekend. Hopefully he can continue to ride this momentum through the final couple rounds, and then into 2021.

“JP had a good ride today. He had a great recovery on the first lap to come from around eighth up to third. Then, after he got by Tallon, I was hopeful he was going to continue that pace up to Mateo. Unfortunately, it just wasn’t quite there today. But to still come away with a podium finish was great. And considering this is a course that can bite you if you’re trying to over-ride it, I was glad to see him ride smart and not force it if it wasn’t there.

“Man, I’m gutted for Clay to have his day end so soon. He was riding really well Saturday and I was looking forward to seeing what he could do in the Pro 2 main. The start was awesome and he was right where he needed to be. Unfortunately, sometimes things just happen. We know we had a failure, but that’s really all we know right now. We’ll have to diagnose it this week to determine what caused it. But I appreciate Clay’s positive spirits in spite of the issue and I know he’ll be raring to bounce back next weekend.”