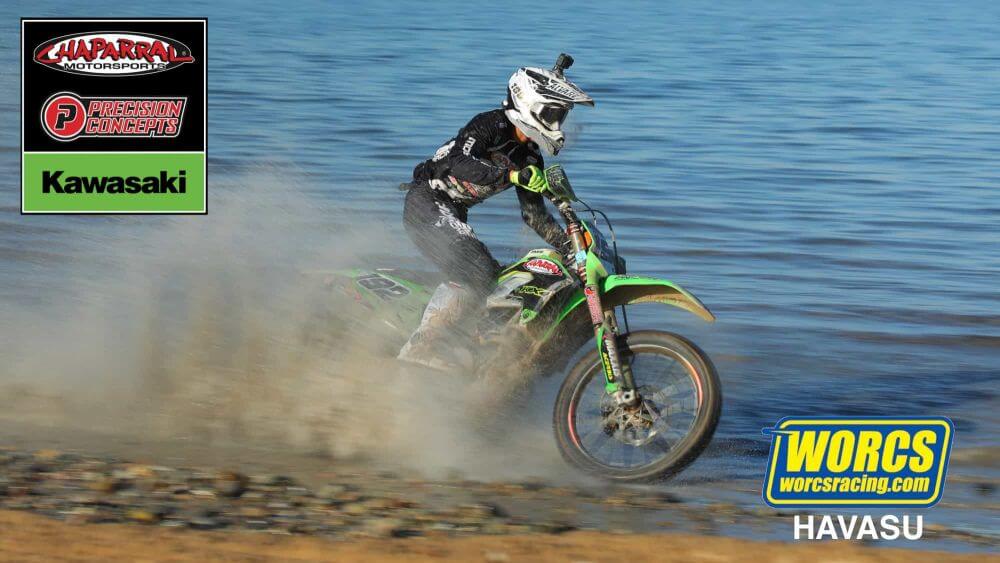 The 2020 WORCS series was able to close out their championship in Lake Havasu City, AZ this weekend. It was fantastic to complete a full season in a year of such uncertainty. In terms of the course, Havasu is notorious for being physically challenging. Shorter laps times means the track roughens up in hurry. Add to that the high quantity of laps riders complete, and it can make for a mentally draining experience. Heading into the weekend, both Zach Bell and Clay Hengeveld were looking for a solid performance at the finale to build for 2021, as neither were in championship contention. JP Alvarez, however, was leading the 250 A championship, and had a shot at the Pro 2 Lights crown. Although it was an outside shot, as series leader Tyler Lynn would need to finish outside the top-five if Alvarez won.

When the green flag waved to signal the start of the ninety-minute, plus-one-lap pro race, Zach’s KX450 was quick to fire to life. He rapidly descended into the first corner with the lead. However, Bell got a bit out of shape over the braking bumps and went wide through the first corner. This allowed numerous riders through and Zach had to mount a charge from around sixth. From there, Bell quickly moved inside the top-five and latched onto series leader Taylor Robert. The two then moved into second- and third-place, respectively, behind Dante Oliveira on the second lap. For the next hour, the three riders ran in formation, a gap of about twelve seconds separating the three. Then, just around the pit rotations, Bell made a mistake and fell in a loose, rocky section by the water. He was able to remount and get back going, but lost the tow of the leaders. After that, Zach continued to circulate at pace, with a solid hold on the final podium position, and crossed the line to take third.

“[Off the start] I got a good jump. It looked like I had the hole shot, but I hit a braking bump coming into the first corner and missed the inside. I got shuffled back in the pack, but quickly moved back up to fourth. From there, I just settled in behind Taylor [Robert]. Saw he made the move on Cole [Martinez], so I instantly made the move to get in behind him. Then I just rode behind Taylor a majority of the race, probably forty-five, or fifty minutes. Then, I made a mistake down by the water and crashed and it took a bit of time to get going again. But it was a good day. I’m excited to be on the podium again and finishing strong. I’m getting stronger, fitness-wise, which is a huge plus for me, and I’m ready to go again next weekend [at Havasu NGPC].”

Clay’s weekend got off to a rocky start, pun intended. In Saturday’s 450 A race, Clay was battling for the top spot over the first couple laps when a softball-sized rock flew off the leaders rear tire. The rock hit Clay square in the face, breaking his goggles and bloodying his face as his nose swelled up. He was able to push through the pain to still finish fifth.

In Sunday’s Pro 2 race, Clay’s KX450 was a little slow to fire for the dead engine start. As a result, he entered the first turn in the teens. From there, Hengeveld set about moving forward through a talented field of riders. He quickly got up inside the top-ten, slotting into eighth on the first lap. Unfortunately, just before the finish chute, Henge’s KX450 suddenly bogged down. It felt to Clay like something was wedged in the rear wheel, though Clay couldn’t see anything obstructing his drive. After nursing the bike down a short straightaway, the issue seemed to resolve, and Clay’s bike was back up to speed. He then came into the pit to see if the team could find anything that may have caused the issue. There wasn’t anything obvious, so Clay rejoined the race, feeling out the bike to make it wasn’t a recurring issue. The bike seemed fine over the next lap, so Clay worked his way back up to speed. Unfortunately, after the issue, he was quite a ways down the order. In typical Clay fashion, though, he continued to put in full effort, moving forward throughout the race to salvage eighth place at the finish.

“There were positive takeaways from the weekend. Saturday, [in 450 A] I was riding well. Then, unfortunately, I got a rock to the face and slowed me up a bit. But I still finished fifth for the day. After that, I cleared my head and looked forward to the Pro 2 race. Bummed I had some issues there, but it’s all good, it’s racing, it happens. So, I’m ready to get back on the KX250X next weekend [at Havasu NGPC] and finish the season strong.”

JP had a solid start to the weekend on board his KX250X, as he was able to take the win in the qualifying 250 A race and lock up the championship. Off the start of Sunday’s Pro 2 Lights race, Alvarez was racing back-and-forth with Angus Riordan for the lead. JP was able to control the point position as he scrubbed his way into the lead over a tabletop. From there, JP was able to lead the first lap, but then dropped to third behind Riordan and Tyler Lynn as he was finding his rhythm. As JP was remounting a charge on Riordan on the next lap, he fell and lost a bit more time to the two leaders. This seemed to light a fire underneath him and over the next few laps, he began to reel the leader back in. Just after the forty-five-minute mark, Alvarez had caught back up to Angus and pulled an outside-in overtaking maneuver to get into second place. JP continued his excellent form, reeling in the leading Lynn over the next few laps. Down a straightaway of jumps, Alvarez rocketed his KX250X into the lead and dropped the hammer to open up a gap. In fairness, Lynn knew he had the Pro 2 Lights championship locked if he simply stayed inside the top-five. But Alvarez went on to open up an impressive gap at the finish, taking top honors on the weekend.

“I feel really good about the day, coming out on top. Angus and I were neck-and-neck on the hole shot and I was stoked on that. Then I went on to lead the first lap. But Angus [Riordan] and Tyler [Lynn] got by me and then I took a bit of a tumble. Once I went down I worked hard to pick them back off. Tyler kind of let me past, because he knew he just need second for the title. [Today], the bike was great, I was able to put my KX250X wherever I wanted. Through the whoops and square edges, it just handled great. Honestly, I’m just so stoked right now. At the beginning of the season, I didn’t expect to be in this position, to be a top contender. So, to take the championship down to the last race, I’m happy about that.”

“Overall, the team had a good weekend. Zach, Taylor and Dante showed they were the class of the field, pulling a gap and riding pretty much nose-to-tail through fifty minutes or so. It was unfortunate that Zach had a couple falls and lost the tow of the leaders. But, I’m happy for him to have a solid performance and land on the podium in the WORCS finale.

“Clay had such a good start to the weekend, but he got a huge rock to the face during the 450 A race. He was worried he might not have any teeth after the impact. So, for him to finish that race, and in fifth, again goes to show how tough he is. In Pro 2, we’re not really sure what bogged his bike down early in the race. We’re thinking it must have been something that lodged up into the rear brake, or the drive, because it then corrected itself. From there, Clay was so far back, but he kept putting in the effort and I always appreciate that. Honestly, all I want for Christmas is for Clay to have an issue-free experience at the NGPC finale next weekend!

“JP’s weekend couldn’t have gone much better. He looks really good on the 2021 KX250X, and I think this weekend he showed another level. For him to drop back early in the race, then rally, reel back up to the leaders and pull a gap to the finish was an impressive display. It was enjoyable to watch and be a part of.”