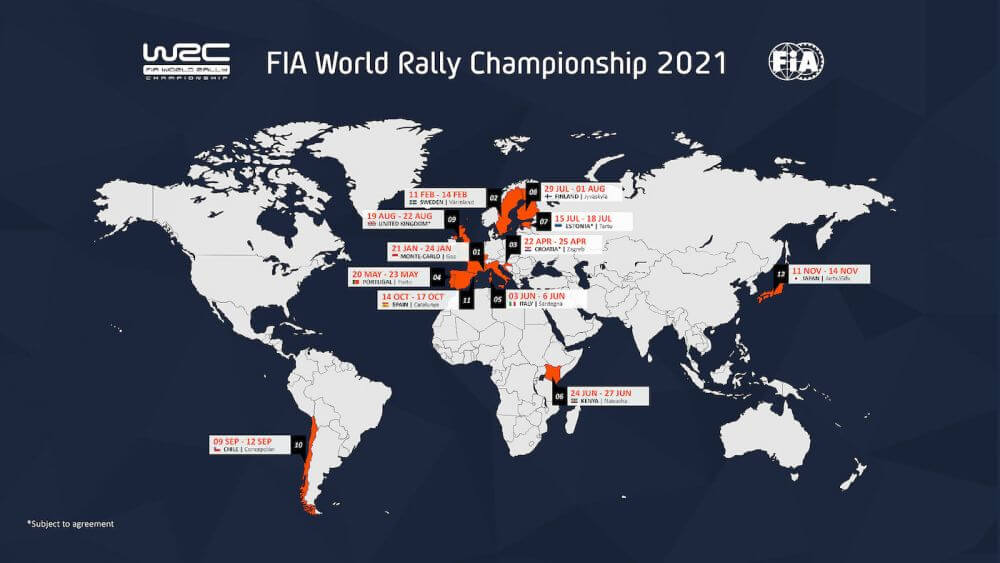 The 2021 championship in detail
The season kicks-off with the traditional season-opening Rallye Monte-Carlo in the French Alps. It will be followed by Rally Sweden, the series’ only pure winter fixture.

Croatia forms the third round and will be held on 22 – 25 April. It is the opening pure asphalt encounter and will be based in capital city Zagreb.

Portugal’s late-May fixture is the first of three hot weather gravel rounds. It is followed in June by Italy and Kenya, which completes the opening half of the championship.

The cancellation of this year’s Safari Rally Kenya, one of global motorsport’s legendary contests, means the WRC returns to Africa, the world’s second largest continent by size, for the first time since 2002.

WRC Promoter is in discussion with the UK governing body, Motorsport UK, which is working to confirm the required government funding. An announcement is expected to be forthcoming.

Two of the final three rounds take place outside Europe. Chile and Spain precede Japan, which hosts the coveted final round in November. Japan’s inclusion, 11 years after the previous WRC fixture there, marks mainstream Asia’s first appearance since then.

WRC Promoter develops strategy to combat effects of pandemic
The continued consequences of Covid-19, which led to the loss of several WRC rounds in 2020, had a major influence on the calendar structure.

After the opening rounds in Monte-Carlo and Sweden, winter events which cannot be moved from their early year dates, the season pauses for more than two months to allow maximum time for the effects of the pandemic to ease.

No rounds outside Europe are scheduled before late June and only a third of the 12 rounds will be held across the first five months of the year.

“Covid-19 has hit international sporting events extremely hard. WRC has not been spared, leading to the unfortunate cancellation of several events throughout 2020,” said Siebel.

“So, in developing the 2021 FIA World Rally Championship calendar, we had to take pragmatic and strategic decisions on the continuing impact on global travel next year.

“We could not foresee any long-haul events being held in a safe manner for the public, or for our large group of travelling staff, suppliers, competitors and media, for the first five months of 2021.

“It’s essential our event organisers are fully committed to managing the difficult Covid-19 controls we can expect to be in place next year while delivering high-quality championship rounds. I’m confident the 12 rallies chosen for next year will not let us down,” he added.

In a further measure, rallies in Turkey, Latvia, Belgium, Greece, Italy (Monza) and Argentina will be on a reserve list of contingency events in case of Covid-19 issues, the latter as an option for non-European rounds.