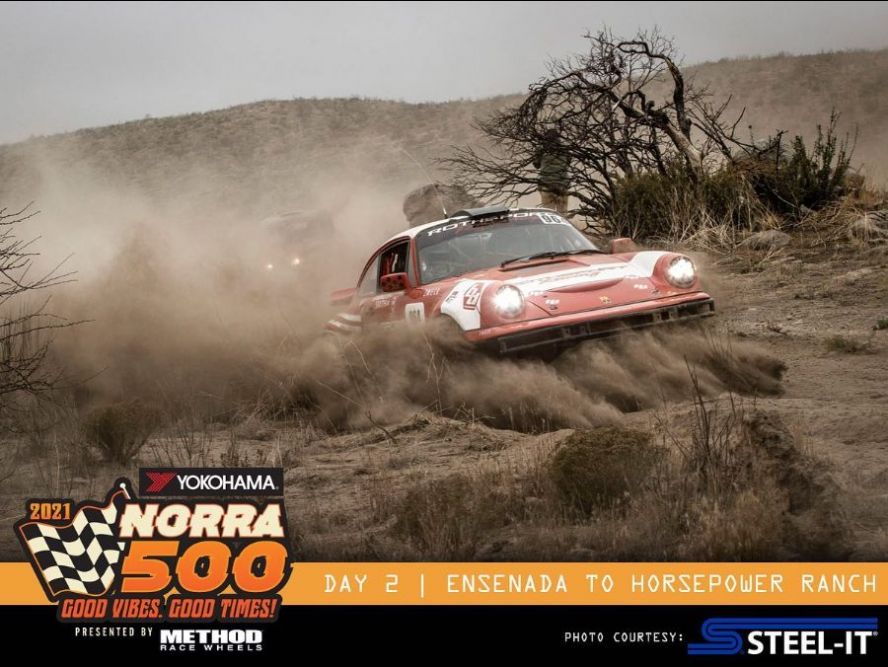 AGUA DULCE, CALIF. – NORRA racers hit the dirt on day 2 of the Yokohama NORRA 500 presented by Method Race Wheels. The moment everyone has been waiting for finally arrived. The sun was just starting to light up the horizon as the bikes took off into the dawn from Horsepower Ranch. Motorcycle competitors would be first off the line, and first into the pine forest. There they would negotiate some tough terrain that included everything from silt to water crossings, and much more. They would have all the challenges of riding at speed in unforgiving terrain, but also have to navigate by road book which takes even more skill. Not only are these riders tough, but they are walking computers; making countless, split second decisions as they ride. The fastest on the day was Mark Seiler who rode his Honda XR650R to the top of the standings racing in the 50+ Vintage Dudes class. Around 6 minutes behind was Bernardo Segura Perez Valdes on his KTM. He was competing in the Modern Lites class. Third fastest was Jeff Leonard on a Honda 450X. Leonard races in the 60+ Vintage Dudes class. While most his age are riding a recliner, he is out showing the younger guys how it’s done in Baja. Buck Vinson on a Honda XR600R, and Thomas Knapp (also a 60+ Vintage Dudes competitor) riding a Beta 430RRS round out the top five finishers. Thomas’ Beta is the one exception to the Hondas, and KTM’s ridden by the rest of the field. 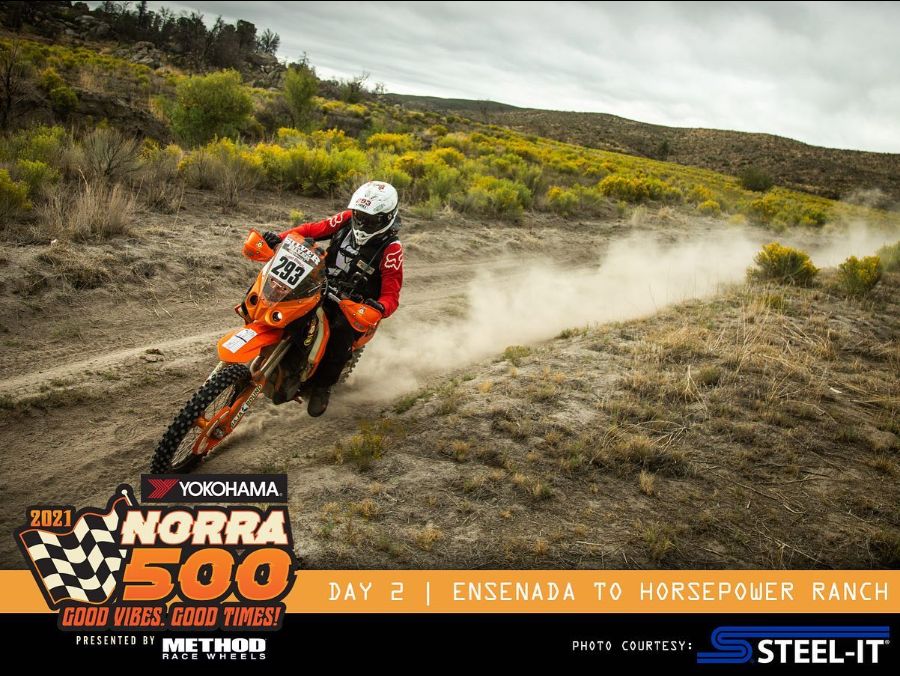 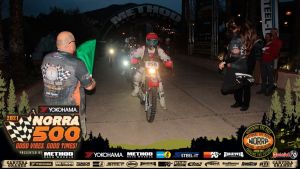 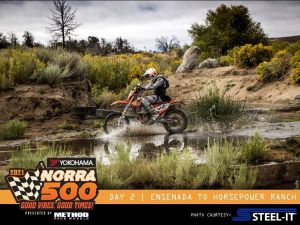 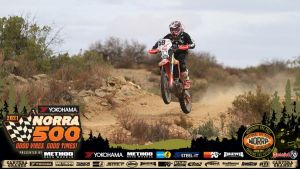 The bikes were allowed a sizeable head start before the cars, trucks, and UTV’s would leave for safety reasons. The Safari Class led by Baja aficionado Michael Emery of Slow Baja fame took off to get into some good spots to watch the race, and to take in some sights along the way. Pete Sigwardt was along with Michael reliving his last NORRA race which was 50 years ago. Sigwardt was racing a specially prepared 1971 Ford Bronco that paid homage to his mentors Bill Stroppe, and Parnelli Jones. Unfortunately Sigwardt lost his transmission, and will be concentrating on the “Good Vibes. Good Times!” portion of the event with co-driver Keith Howard; something they are not at all upset about. Maybe they can hitch a ride with fellow Safari participant Geoff Hill from Baja Bound Insurance. 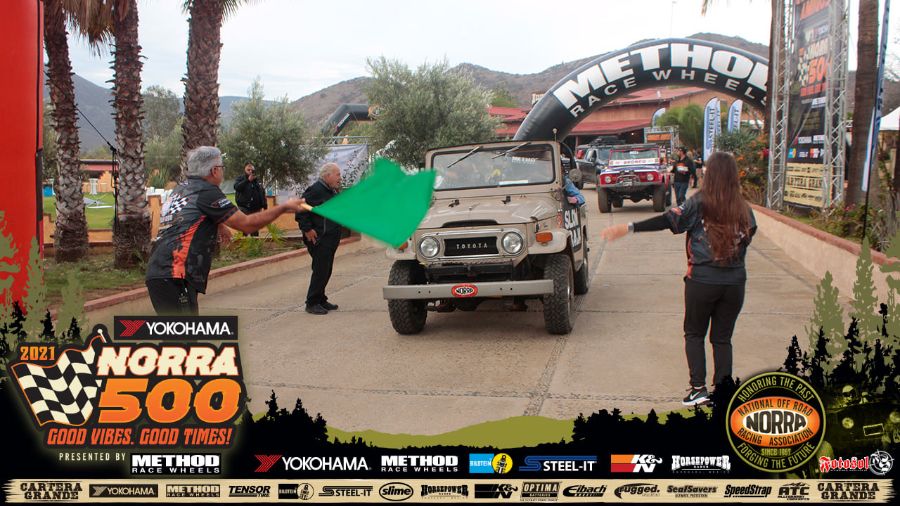 Once the cars, trucks, and UTV’s lined up, it got a lot louder. The sound of high strung V8 engines filled the air. We are not sure what lurks in the rear of the Motion Tire car number 1563, but it sounds nasty! They left a pair of stripes in the driveway with just a blip of the throttle when they took off. The motion team was out in force with 3 cars entered; the 1563, and 156 unlimited buggies, and the 518 Vintage Class 5 car. The 1563 of Ross Devlin took the team’s top honors with a 16th place overall. The Baja bug of Mike Scott took 39th overall, and Dennis Boyle was 49th overall in the 156. 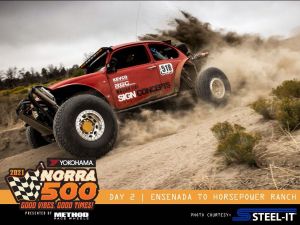 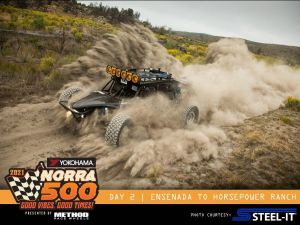 The overall leader after day 2 was surprising. It might have been the technical aspects of the course, or the huge Cartera Grande prize purse that drove the UTV’s to such speeds. Sitting on top of the leader board is Thomas Purcell in his Can Am X3. He edged out Troy Johnson of the Fab School who was racing a Jimco Class One by 3 minutes. The UTV’s were charging as there were 4 in the top ten overall. Sean Morgan was 7th overall in his Maverick X3 followed by John Zambie in an X3 and drifter Chris Forsberg in a Polaris RZR. With over 23 thousand dollars in prizes put up by Yokohama, Method, Tensor, Bilstein, STEEL-IT, Slime, Horsepower Ranch, K&N filters, Optima Batteries, Eibach, Rugged Radios, Seal Savers, Speed Strap, All Terrain Concepts, and others, anybody would be pushing hard to win. 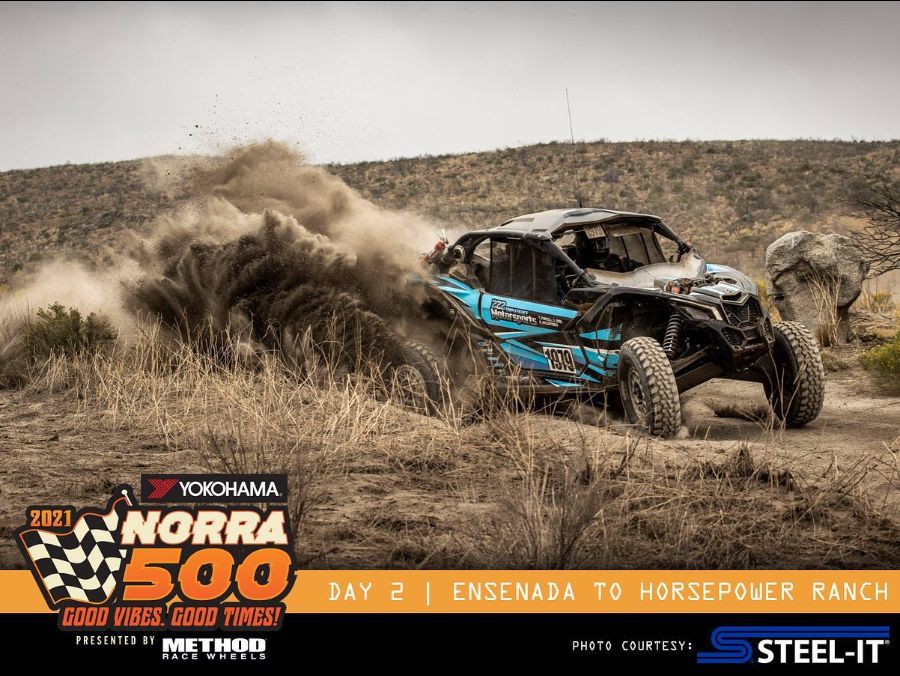 The UTV’s were not the only ones that were fighting above their weight class. Every NORRA event we see the Vintage Class 5 cars of Hap Kellogg, and Drew Belk absolutely duking it out with each other. Their rivalry catapulted them both up to the 3rd, and 4th overall position after day one with Kellogg leading. The time gap between these two is an incredibly tight 2 seconds! They are definitely not holding back. 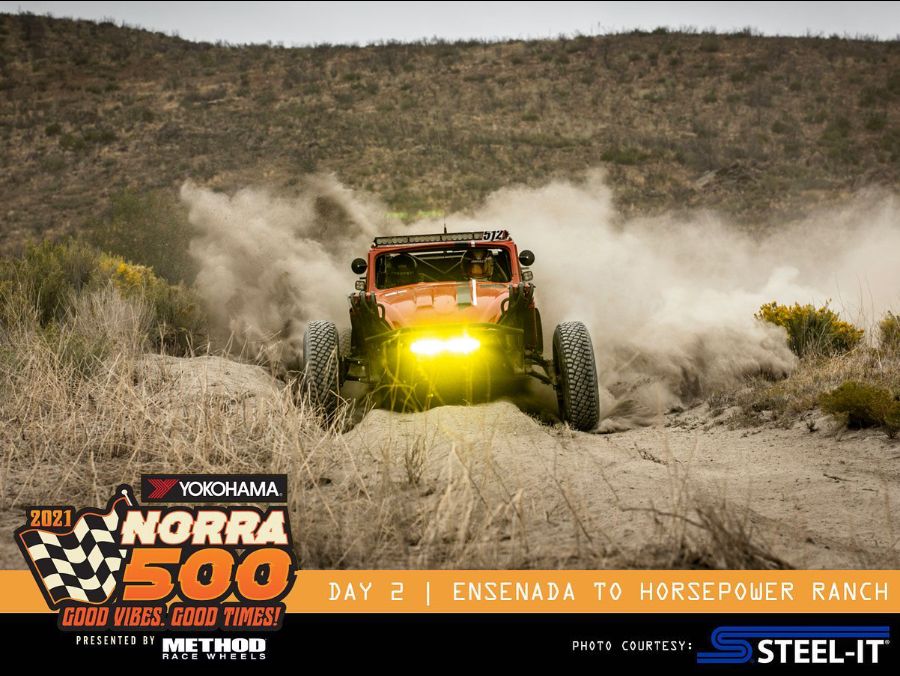 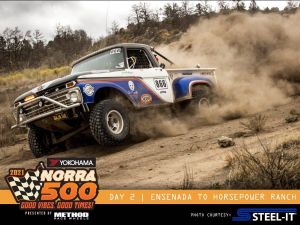 The balance of the top ten overall are what you’d expect. Mike Diorio was 5th fastest in his beautiful Jimco class one followed by Trophy Truck champion Apdaly Lopez driving his Curry Built Ford truck. Matthew Legg was 10th place in his Evolution Heavy Metal class Ford Ranger. Another stand out performance was that of Bob Howle who finished 14th in his Vintage 4-cylinder buggies class Chenowth DR2. He managed to outpace a slew of much more powerful unlimited cars and trucks. Jay Bills was 18th in another Chenowth DR2, but his car was racing in Vintage Open Buggies. The big powerful unlimited vehicles are expected to handle the course well. It’s interesting how well some of the older, underpowered cars handle the terrain. The Meyers Tow’d of Lyman Scherer finished the day as did the Funco staggered tandem of Bruce Galien, and the Prerunner Porsche Cayenne of James Manning. The diversity of entries at NORRA races is incredible.

Day one of racing, and celebrating is over, but day two will be just as challenging. They will cover 335.8 total miles including the STEEL-IT King of the Mountain special segment. Stay tuned for a full report.