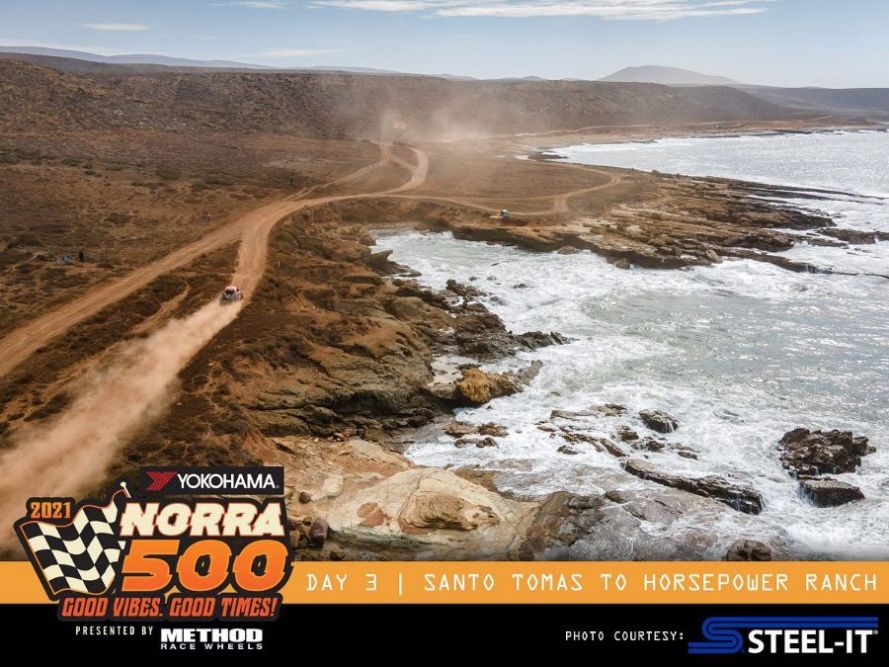 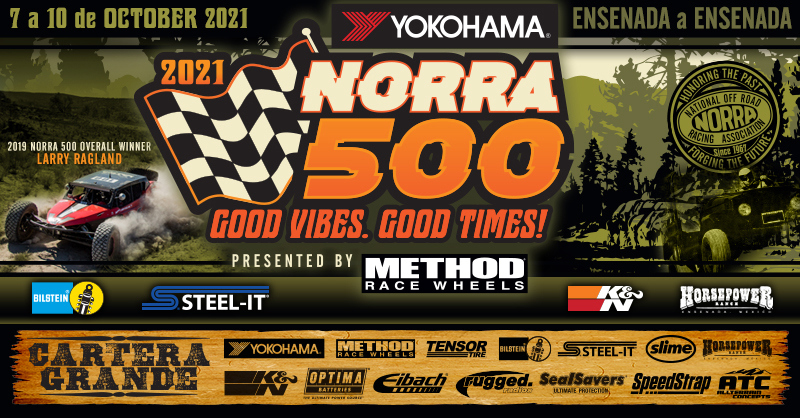 AGUA DULCE, CALIF. – Day three of the Yokohama NORRA 500 Presented by Method Race Wheels was a big one; the Good Times, and Good Vibes continued. The course started in Santo Tomas and headed right off into some rough terrain. Many teams are licking their wounds after Friday’s 200 miles of dirt. We had some unfortunate retirements after day two of the rally, but at least they are in Baja, and a bad day in Baja is still better than most good days at home. It doesn’t take long to forget your troubles while eating tacos, and drinking Cerveceria Transpeninsular “Cerveza Clara”. Those teams who are still in the race will be thankful for the Mag7 pits set up along the course. There are 335.8 total miles to run with 293.1 in the dirt, and 42.7 in transit. 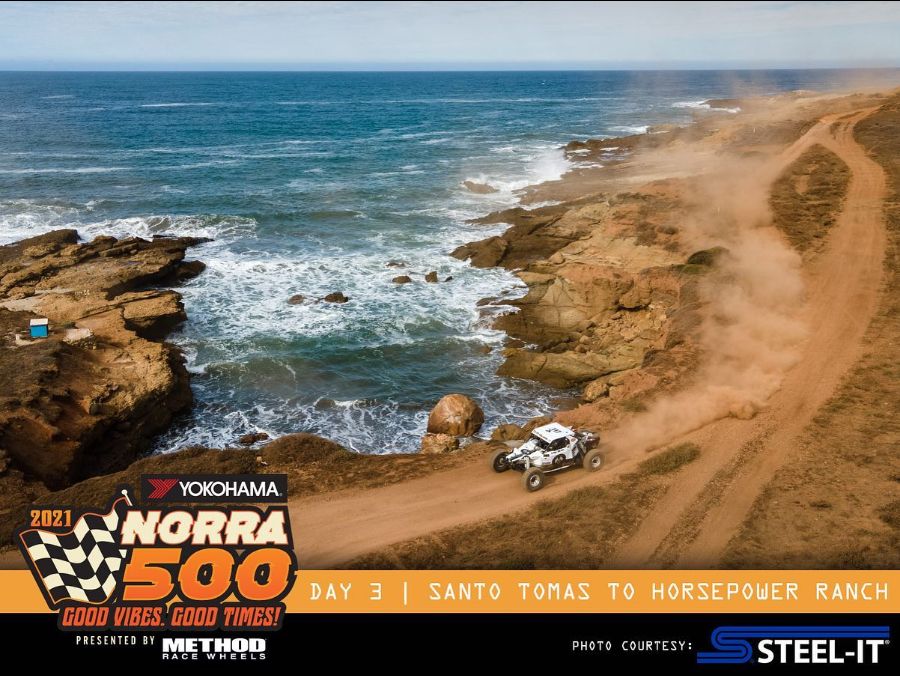 Day 2 of racing was just as tough as day one, but had the same payoff when it came to scenery. Both sections that run along the beach are spectacular. Just make sure you stay on the course as you don’t want to end up in the drink; wait until the finish line celebration for that. In addition to the beach, and the mountains, the course also contained the STEEL-IT King of the Mountain stage for the 4 wheel competitors. It proved who has the horsepower, and the nerves to be the fastest on the mountain. 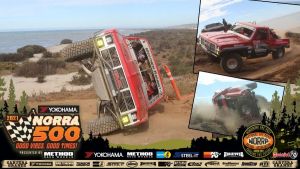 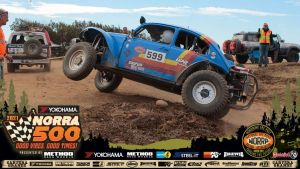 During stage one for the bikes, overall leader after day one Mark Seiler finished back in 4th. Bob Stewart was fastest followed by Buck Vinson, and Thomas Knapp. As the day went on, the lead order swapped back and forth. Stage 2 winner was Thomas Knapp with Mark Seiler in second. Thomas Knapp won stage 3 too, which brought him up in the overall standings. Buck Vinson was second, and Seiler third. It was obvious that the overall winner would come down to the final stage. Knapp went three in a row, but it wasn’t enough to topple Seiler’s lead. Seiler finished second; giving him the overall win, and the top spot in 50+ Vintage Dudes. Vinson finished third, which earned third place overall, and the Vintage Open win. Knapp’s amazing run on day 2 put him on the overall podium in second place, and the win in the 60+ Vintage Dudes class. Simon Edwards took the Modern Open class win, and Jose Aantonio Lopez took the Multi-cylinder class win. What a battle these riders put in! 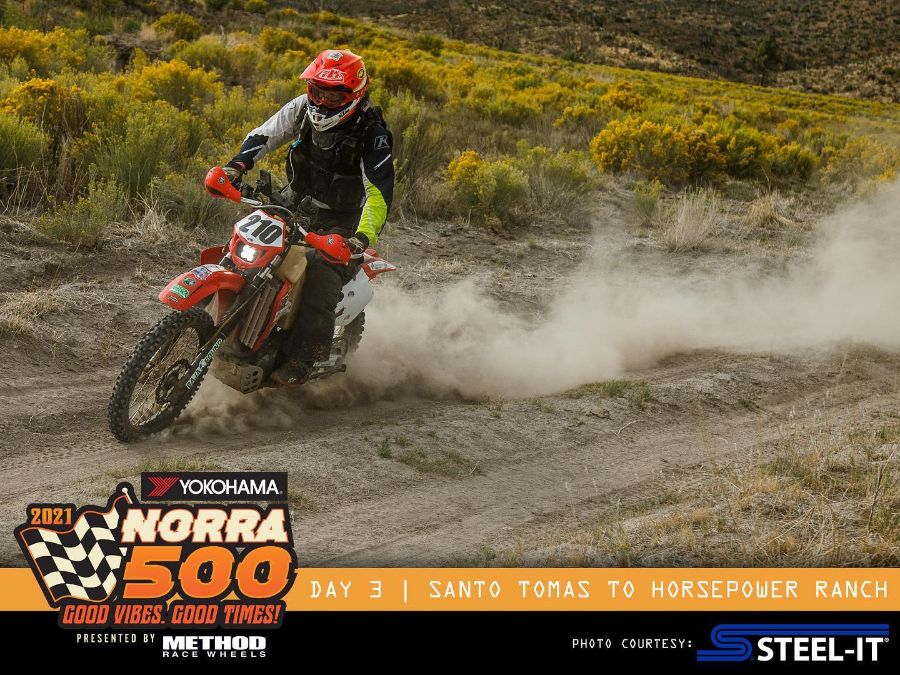 In a surprising development, after the first day of racing, Thomas Purcell led the overall in his Can Am X3, with Troy Johnson in second. It’s predictable that the big, unlimited cars will have the edge as the southern course has many more sections where they can shine. After stage one, the results proved this out. Mike Diorio took the fastest time in his Jimco with Gay Smith finishing second (also in a Jimco). You have to hand it to Hap Kellogg; he was 3rd fastest on the stage in his Vintage Class 5. He and Gay Smith are both driving Baja bugs, but the difference between Smith’s Evolution Unlimited Buggy class car, and Kellogg’s traditional class 5 are like night and day. In 4th place was Apdaly Lopez in his Pin Manufacturing truck; the family business. The fifth fastest was our underdog Thomas Purcell. He was flying in his Can Am X3. He has earned his position in the front pack. Right behind Purcell was Santiago Creel in his Evolution Modified Turbo class UTV, and Rick Paquette in another Vintage Class 5. It’s amazing how these limited cars are keeping up with the big unlimited cars that have massive V8 power. 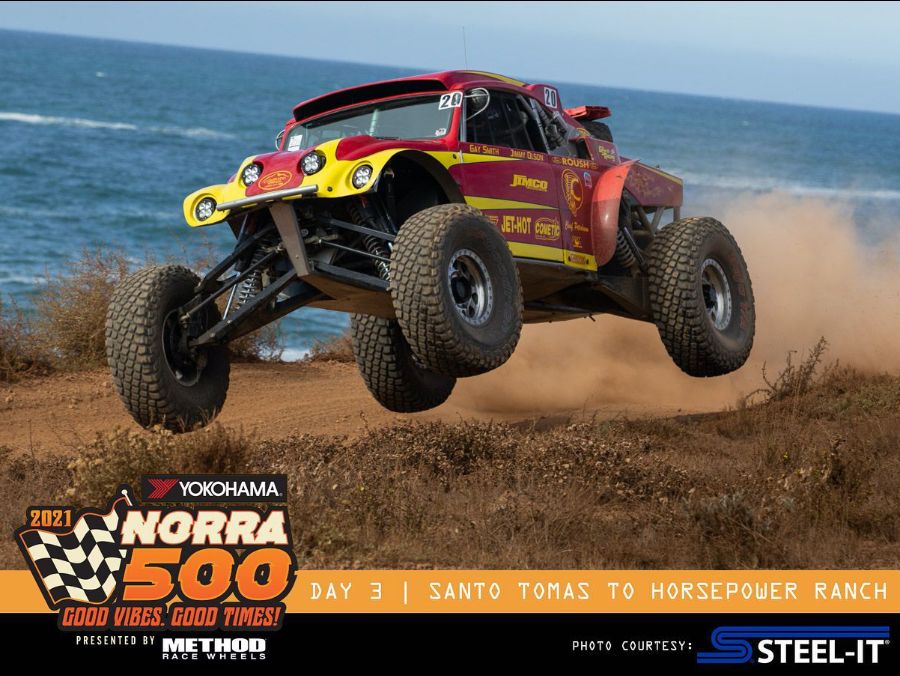 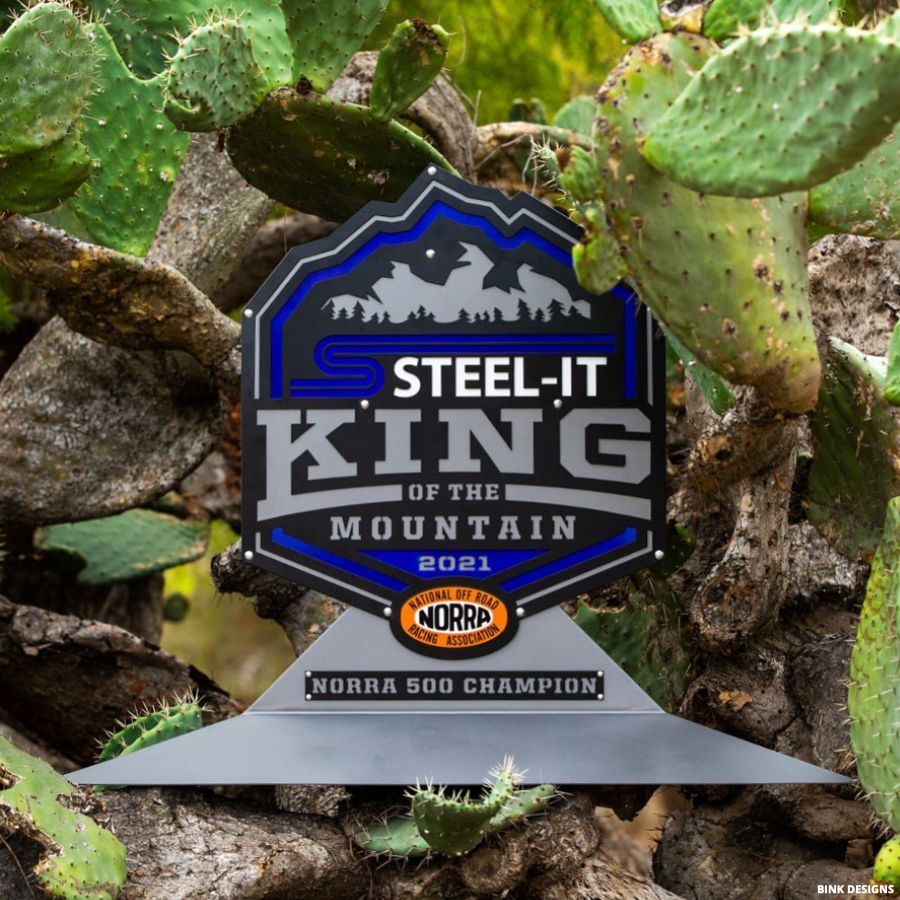 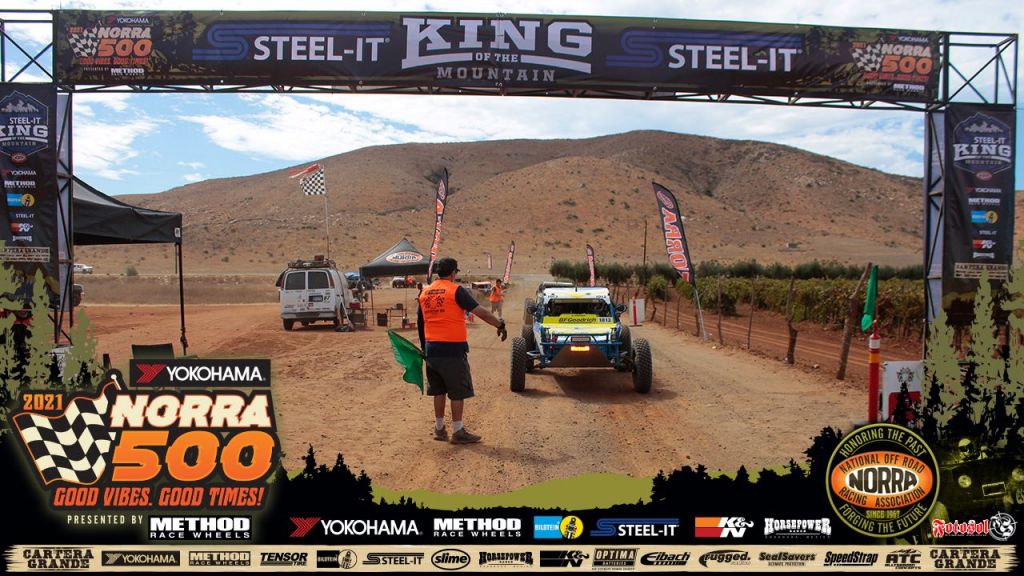 The final stage was it; the last chance to make up time on your competitors. Gay Smith laid the smack down and finished first. Rick Paquette was second in his Vintage Class 5. This was definitely the year of the class 5 at the 500. Dennis Boyle was third, and Santiago Creel flew in his Evolution Modified Turbo UTV to finish fourth. He would get a big payoff from the Cartera Grande. Fifth place went to Mike Diorio, and the next two spots went to Vintage class 5 racers Hap Kellogg, and Mike Belk. Absent from the top spots was Troy Johnson who finished back in the 21st spot. He climbed into the overall lead in stages 2, and 3, but his finish outside the top ten dropped him back to third overall, second in the Evolution Unlimited Buggy class. The overall, and Evolution Unlimited Buggy class win went to Mike Diorio. Hap Kellogg finished second overall, and won Vintage class 5. Third overall, and Evolution Modified Turbo UTV winner was Thomas Purcell, the day one of racing overall leader. Fourth overall was Troy Johnson, and rounding out the top 5 overall was Mike Belk. 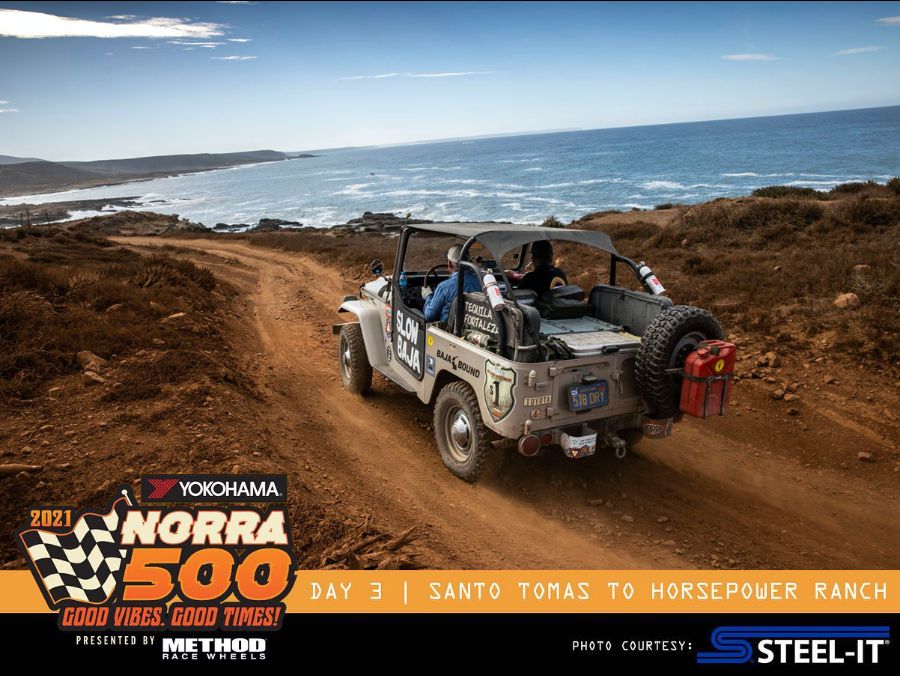 Day 2 of racing at the Yokohama NORRA 500 Presented by Method Race Wheels exceeded expectations when it came to competition. There were intense battles in every class, and final positions were up for grabs until the final miles. Congratulations to all the competitors, and their crews for the incredible performances they put forth. On to the awards celebration!