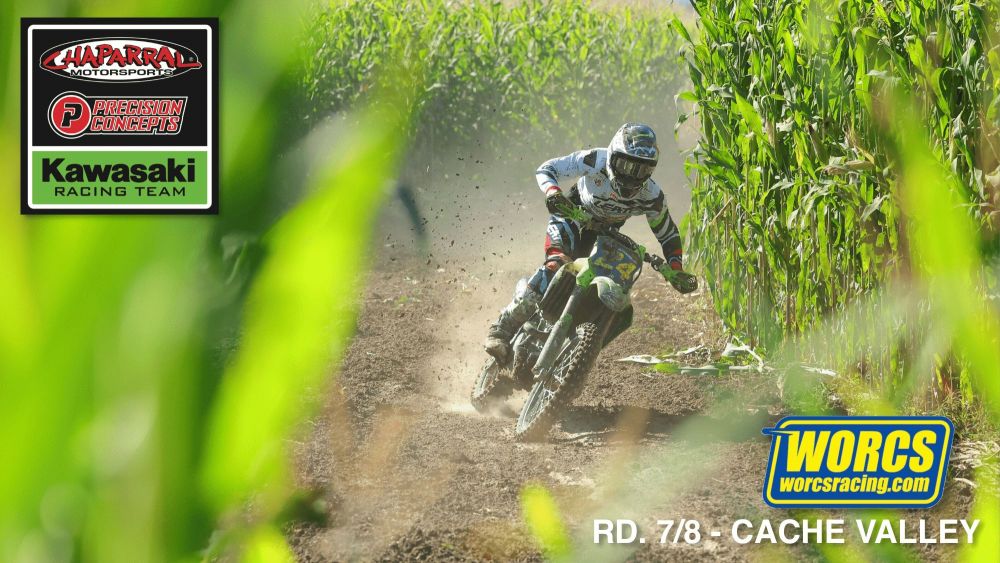 Coming off an extended Summer break, the WORCS season headed to Cache Valley, Idaho for an action-packed double header. Saturday and Sunday would see identical schedules, as all motorcycle classes raced twice over the weekend. Each day culminated in a 90-minute pro race. Though the course was the same each day, Saturday evening rain showers made each day’s conditions unique. The course mazed through overhead-high corn right off the start, before speeding through a fast, winding grass-track section. A well-prepped motocross track anchored the varying terrain as the stage was set for plenty of great racing.

For Saturday’s pro race, a dead-engine start was utilized. Tyler Lynn’s KX450X fired quickly as the pro’s rocketed off the line. and the Kawasaki rider slotted into second behind Dante Oliveira. Lynn paced right behind the series point leader over the first two laps. On the third lap, Lynn made a small mistake, going too wide through a right-handed corner. Cole Martinez was close enough to capitalize and push Tyler back to third. Then, on the the next lap Tyler suffered fall. Though it was brief, the fall cost Lynn a couple positions. More importantly, though, it interrupted his flow and the KX-pilot found it hard to get back into a much-needed rhythm. Still, Lynn held a consistent pace to cross the line in fifth place.

On Sunday, the race started with an MX-style start: live engine, in gear. Tyler didn’t quite get the jump off the line he needed, and was pinched off heading into the first corner. He was quick to dive inside, though, and pushed past numerous riders, making it to third place through the first handful of corners and straightaways. Lynn held a strong third for the first half of the race, keeping within striking distance of the leaders. Oliveira was right behind Tyler, and around the pit stops was able to overtake Lynn, putting the Kawasaki rider in fourth place. From there, Tyler held a strong pace, staying within sight of the podium position and finished a solid fourth place on the day.

Though Robby was the only Vet Pro on the weekend, the WORCS put him with the 16-24 A class riders to make a good race of it. On Saturday, Robby was able to pull the hole shot and stretch away from the field each lap to take the overall race win. On Sunday, Bell was a little late to the line, giving the first row around a minute head start. Through the trickier conditions after the overnight rains, Bell stayed smooth and chipped away at the gap to the leaders. By the halfway point, Robby was able to take over the lead and take the overall on day two as well.

“Tyler had a solid weekend in the Idaho cornfields. On Saturday, we made a few bike changes that we thought were going to be better for the pro race. Unfortunately, it was the wrong direction, but Tyler did well to manage it and come out with a fifth. Sunday, we went back to standard with the bike and Tyler looked more comfortable. His pace was good, and what’s even better is seeing him put himself up in the podium positions right from the start. The more he gets up there and learns that pace, the stronger he’s going to get. From here, we head to some sandier tracks, a terrain Tyler really likes, so he’ll be looking forward to continuing his strong performances over the final rounds of the year.”

How to Watch the The California 300 Previous post
Podiums for Monster Energy Athletes Rodrigo Ampudia, Jorge Sampietro at SCORE Baja 400 Next post