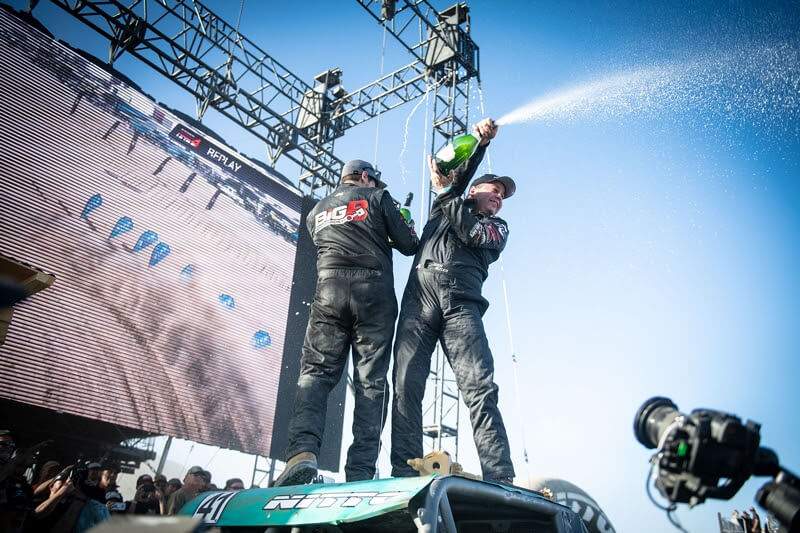 A New King is Crowned

Over the past twelve years, the same five racers have won the Nitto King of the Hammers Powered by OPTIMA Batteries. This year, a new King was crowned. Josh Blyler proved that his 2019 ULTRA4 season points championship was no fluke, overcoming a nail-biting rollover late in the race to win the 2020 Nitto King of the Hammers in his Miller Motorsports buggy. “We knew we were leading, we knew we were doing good, and we drove it in there too hot, too hard, like a bunch of idiots, and just like that we were on the roof,” Blyler confessed at the finish line. “Jared was scrambling, he couldn’t get out. We finally got out, and as he was hooking the winches up he said ‘Don’t wait on me when we get you flipped!’, and I didn’t.” The Klingerstown, Pennsylvania native is a perennially fast and consistent finisher, completing all four Nitto King of the Hammers that he has entered (11th last year, 4th in 2018, and 6th in 2017).

Erik Miller of Miller Motorsports finished in second place for the third year in a row, securing more podium finishes at the Nitto King of the Hammers than any other driver. “I’ve never been this happy to be 2nd place, and I couldn’t have lost to a better guy,” the two-time King shared at the finish line. Miller battled electrical issues in Jack North that cost him half an hour of time, eventually receiving help from fellow competitor Jeff McKinley. The Nitto King of the Hammers is a no chase race, meaning that outside assistance is only allowed in designated pit areas. Competitors, however, are allowed to help each other, and many did just that.

We are getting ahead of ourselves though. The Nitto King of the Hammers is just part of a week of racing in Johnson Valley in front of tens of thousands of spectators and millions of online viewers watching unparalleled life coverage from the desert. The marquee event of the week, the Nitto King of the Hammers covered 77 miles in the desert before running 66 miles in the same rocks used for the Can-Am UTV King of the Hammers Presented by HCR and the 4WP Every Man Challenge. The unlimited 4400 class is required to run an additional lap in the rocks though, along with even harder trails with ominous names such as Full of Hate and Hell to Pay.

Unlike the Toyo Desert Invitational the day before, where Bryce Menzies led from flag to flag, the leader of the Nitto King of the Hammers changed over a dozen times as competitors succumbed to mechanical issues, putting fans on the edge of their seats. Last year’s winner Jason Scherer jumped out to an early lead before transmission failure ended his day, opening the way for two-time KOH winner Loren Healy. When driveline issues hampered Healy, second generation racer Bailey Campbell took the lead on Lap Two. A water pump issue took Campbell out of contention, but her father Shannon brought her the parts she needed to finish the race in 22nd place. At that point, Cameron Steele was leading the race in the Lasernut buggy, but a broken steering rack dashed his hopes of winning the Nitto King of the Hammers.

Steele and veteran co-driver Wayne Israelsen helped Marcos Gomez change a tire, keeping Gomez in contention for the victory. After rolling in qualifying, Gomez had to start at the back of the field, putting him ahead of many competitors on corrected time. A broken rod end on the independent front suspension just miles from the finish line dashed Gomez’s hopes of winning KOH, but he still managed to limp his UFO-built buggy across the finish line in third place. The last time a vehicle with a solid front axle won KOH was Erik Miller in 2016. This year, his buggies finished first and second, reigniting the debate between IFS and solid axles. “I toyed with the idea of building an independent car,” winner Josh Blyler revealed. “We stuck with this because it’s tried and true, and the Miller car is just outstanding. It’s bulletproof, it’s tough, we added six inches to the trailing arms to make this thing handle a little better in the desert. My dad (fellow racer Rusty Blyler) was at Reno and led that race for like three laps, and I said ‘Maybe solid axles ain’t dead.’”

The 212-mile course included punishing desert terrain and some of the most challenging rockcrawling trails in the world (aka The Hammers), KOH has a reputation as the toughest one day off-road race in the world, pushing man and machine to their breaking point, and beyond. Attrition was as high as ever, with only 44 of the 97 competitors reaching the finish line within the 14-hour time limit. Saturday brings more action with the return of the Progressive King of the Motos starting at 8 AM PST and the Gambler 500 HooptieX on the infield short course at 4 PM PST.

Not on the lakebed? Follow all of the action at ultra4racing.com/live. The Nitto King of the Hammers Powered by OPTIMA Batteries kicks off the ULTRA4 season, which consists of the East and West Series, with three races each and the National Finals held in Reno October 23rd. The next race is the ULTRA4 Stampede on March 20th near Sacramento, California and the two series converge for the National Finals in Reno on October 23rd, 2020.

Past King of the Hammers Winners