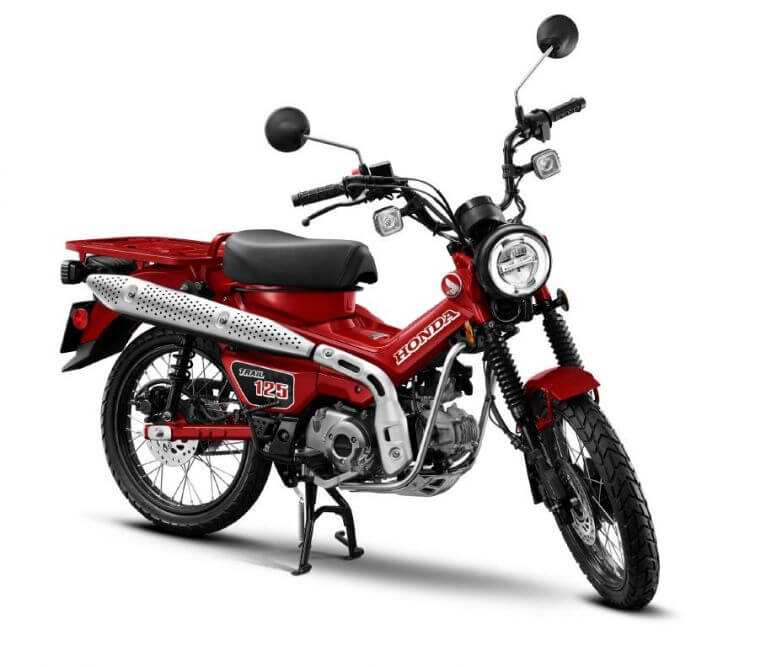 Sixty years after Honda introduced customers to the joys of casual on- and off-road riding, the all-new 2021 Honda Trail 125 ABS (CT125) resurrects a revered brand by injecting a healthy dose of practical design and hassle-free technology to create a miniMOTO that—much like the Super Cub and Monkey—pays tribute to the past while adapting easily to modern lifestyles.

Debuted in 2019 as a concept model at the 46th Tokyo Motor Show, the CT125 received rave reviews, along with requests for a production model. That wish is now granted with the introduction of the 2021 Honda Trail 125, which expands upon the scope of the popular Super Cub C125 to include casual riding in rural settings, including two-track roads and trails.

This was accomplished by strengthening the C125 chassis, increasing suspension travel and improving fuel range. The engine is the same 125cc four-stroke, single-cylinder overhead-camshaft design operating two valves, but with a high-mounted air intake and upswept exhaust that enhance low-end and midrange power. As with the Super Cub, the Trail 125 has a four-speed semiautomatic transmission. The engine guard adds protection from obstacles like large rocks and tree stumps.

Honda’s designers maintained the distinctive look that propelled the purchase of hundreds of thousands of CT-series machines over six decades. With the launch of the Trail 125, Honda taps into the success of similarly nostalgic miniMOTO models to introduce riders to the joys of trekking on roads and trails.

“When American Honda was established in 1959 and began offering the Honda 50, Idaho dealer Herb Uhl started modifying it for off-road use, resulting in Honda producing the Trail 50,” said Lee Edmunds, Senior Manager of Powersports Marketing for American Honda. “That model became ubiquitous in American campgrounds and on motorhome bumpers in the ’60s and ’70s and led to a number of successors. For that reason, the CT brand has a special history with the U.S. market, and it’s great to see it return with the Trail 125 which, like the Super Cub and Monkey, harkens back to a golden era of American motorcycling but with modern technology and reliability.”