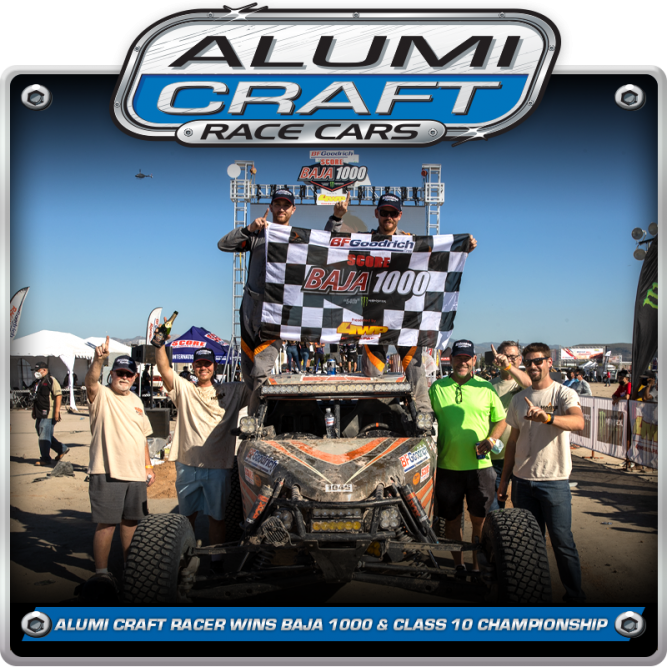 Every now and then, a new generation gets the opportunity to follow in their patriarch’s footsteps. Ethan and Ben Hagle set out on a mission to take on the SCORE-International Baja 1000 in their #1046 Class 10 Alumi Craft. Years ago, their Grandfather Ralph, Uncle Rick, and dad John Hagle won the 1986 Baja 1000 in Class 10. Fast forward to 2021, Ethan and Ben Hagle won the 1226 mile race down the peninsula and secured the Class 10 championship.

Earlier in the season, Ethan Hagle and his brother Ben Hagle had just won the Baja 500. Now in contention for a class championship, they formulated a plan that might help them win the big race. Part of that plan was to have Alumi Craft prep and service the car all season. The other part was to enlist an experienced Baja wheelman.

“Going into this race, we were lucky enough to bring Vic Bruckmann and Ricky Kern on as our third driver and navigator,” Ben Hagle recounted. “With that, they brought a ton of experience and racecraft they were able to share with us. We loaded the car down with spares and changed our strategy to go 80% the whole time, to potentially have no issues and that should get us the win by an hour or more. Vic started the race and took it to 305 at the first BFG pit. He did his job perfectly and brought us a good car a few minutes back from the lead.” 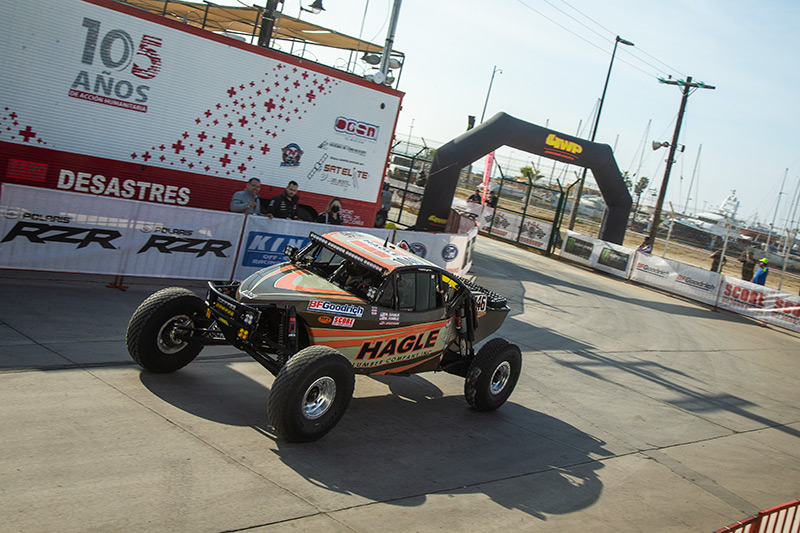 “My section,” Ben recalls, “was from race mile 305-850 and would end up being in the dark the entire time. Me and Ruben Garcia started our section off conservatively and dealt with nasty hanging dust for the first 60-70 miles. In those miles, I was able to take a line I had pre ran and get by a bunch of stuck 10 cars in the silt. With that knowledge, I came out leading the race. We were heading into Fred’s tractor trail and we noticed that I had no clutch and knew we had to be very calculated. We also lost a battery, so we were very skeptical of the car coming to a stop or shutting off. Getting to Bahía de los Ángeles was such a blast as we had a long stretch in between race mile 444-500. I had clean air and put the hammer down with the Alumi Craft buggy, which worked flawlessly. Leaving Bay Of LA, we expected 80-100 mph roads just like we pre-run, but it was dusty. I had to hang back and be conservative. Baja Designs provides such an amazing light package, but throughout our nighttime section, I was only able to use the lights in the push bar because it was just so damn dusty.” 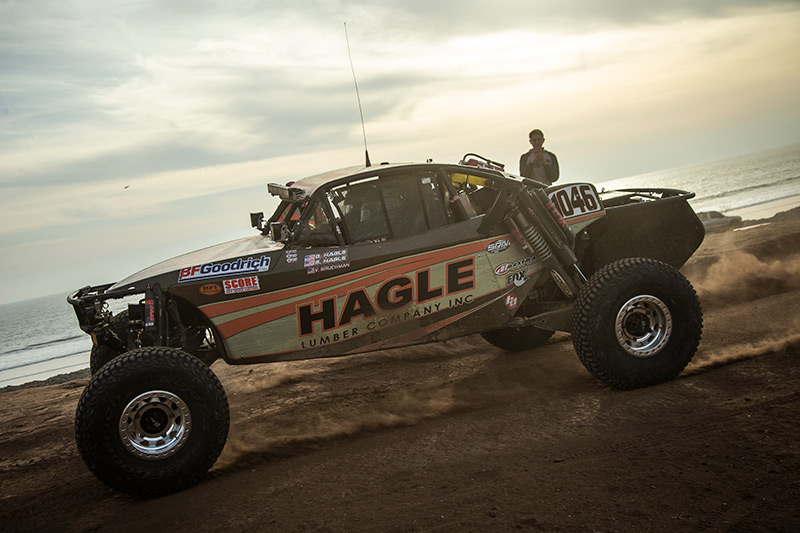 Hagle continued. “At one point in the race, it was so foggy and wet we had to run our shields up to see and that was brutal. Once we got to Vizcaino, the fog cleared and we could let the car eat through the sand section. The Alumi Craft was hard-charging; it felt like we never let off the gas for over an hour. I could not believe the pace we kept through there as the car just ate up everything we threw at it. I had some pent-up aggression before due to how slow we had to drive in the dust. From here on out, I put the pedal down when I could see. The SDG-tuned FOX Racing Shocks were amazing. Coming into the backside of San Ignacio, I overcooked a corner and blasted the car through some giant boulders and came out of it unscathed, thanks to our stout Alumi Craft chassis. We played it smart the rest of the way and handed it off to Ethan Hagle and Dalton Bailey at BFG Pit 6.” 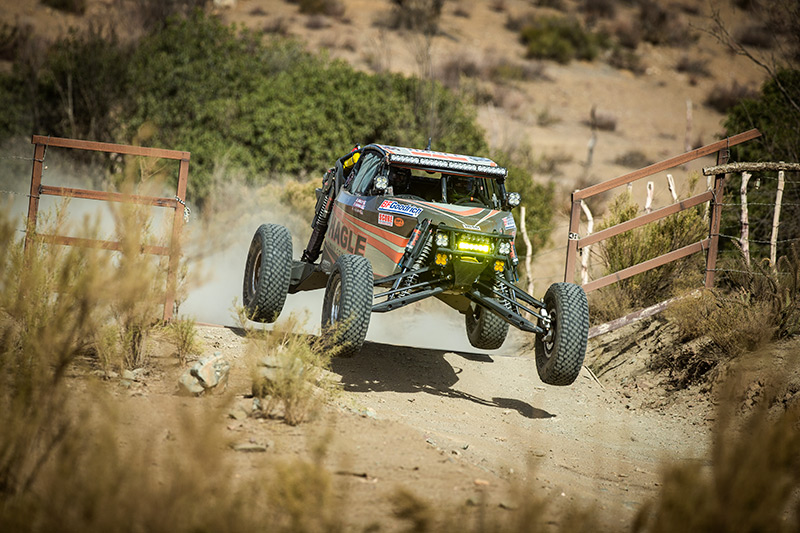 “He had his own set of challenges making it to the finish and ultimately the win. Ethan maintained our lead for miles until second place caught up and made a pass. Ethan reeled them back in only to get a flat, our first in all of our races to date. With the flat fixed they pushed hard into BFG Pit 7, still with no clutch and being pushed out of every pit and banging the car into first gear. Ethan pushed hard into the next section to catch and pass 2nd place and put us back into the lead going into RM 1150. Ethan then made a bad line choice and buried the car in silt. Luckily, a local was there with a 4WD Toyota pickup that quickly came help and pulled them right out. Getting going from a dead stop again, with no clutch, they pushed forward and maintained their lead to the streets of La Paz and into the infield for the finish. We would finish the race almost two hours ahead of 2nd place. We have come to count on Alumi Craft Race Cars and prep service to get us to the finish line. We’ve never had a single mechanical failure and finished every race we have entered. Including winning the Baja 500 and Baja 1000, which helped us win the 2021 SCORE Class 10 Championship.” 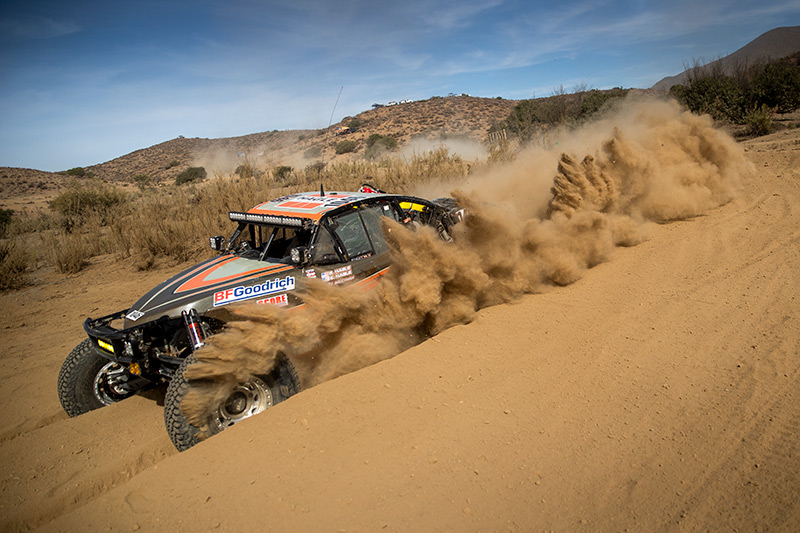 “Winning a SCORE Baja 1000 has been a dream of ours since our Grandfather Ralph, Uncle Rick, and dad John Hagle won class 10 back in 1986. So to win this one, in particular, has been an actual dream come true and a way for us to fill their shoes in off road racing. We could not do it without the support of my Grandfather and our family business, Hagle Lumber Company, Inc and Alumi Craft Racecars. We have to thank our other partners Maxima Racing Oils, Baja Designs, 24/7 Hydration and Racers Edge are very critical to our efforts.” 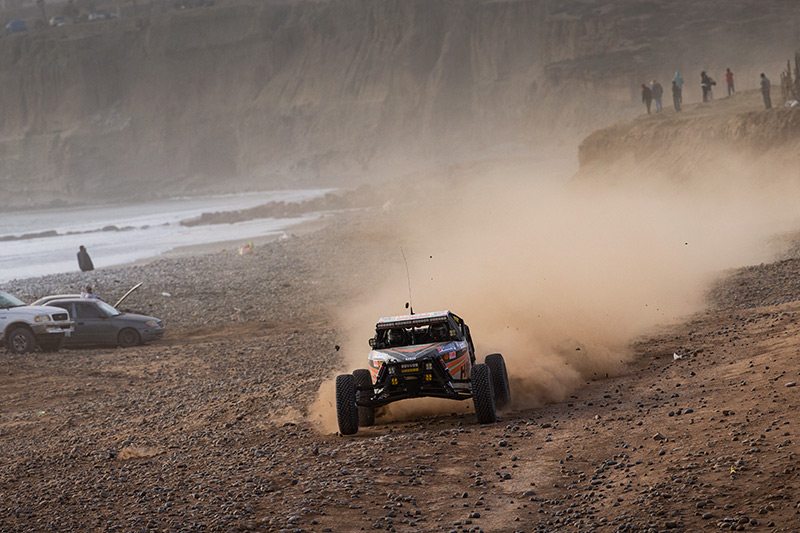 Alumi Craft congratulates the Hagle’s on two consecutive Baja race wins and the 2021 SCORE Championship. Alumi Craft takes pride in building championship-winning off-road race cars. If you need the drive to succeed, call Alumi Craft Racecars for an expert consultation on what it takes. Give Alumi Craft a call at 619-596-9841 or go to: http://alumicraft.info/ to learn more.