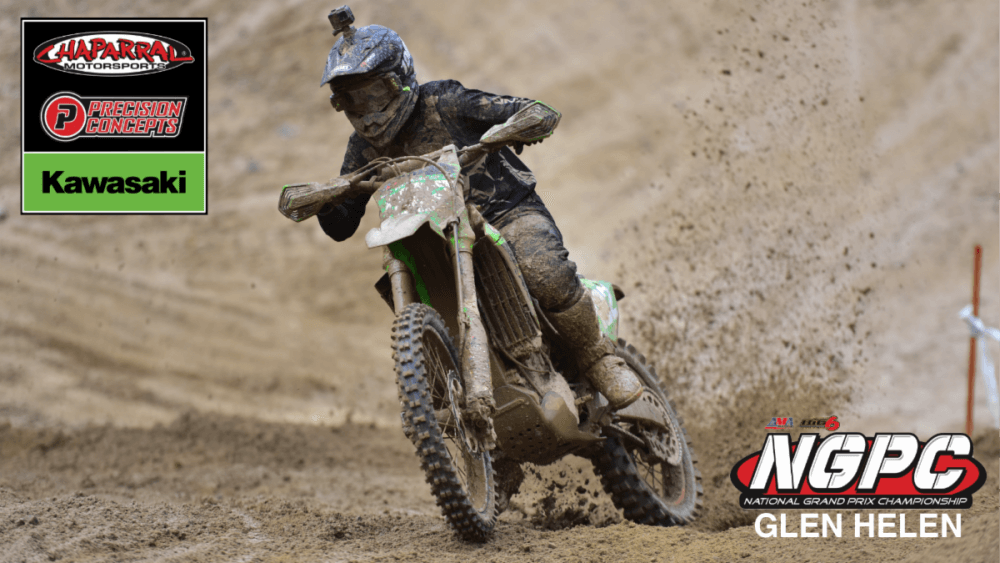 Glen Helen Raceway is a popular stop on the Grand Prix circuit. As a favored practice venue for many of the Pro and Pro 2 class riders, there aren’t many patches of dirt that racers haven’t ridden over. That being the case, the hosting Prairie Dogs MC made a few changes to the direction and sequence of the different sections on offer. This made for a well-received racecourse. Additionally—and for the seventh year in a row—the grand prix was hit with rain, which ended up making conditions pretty good for the ninety-minute pro race on Sunday.

Chaparral Motorsports, Precision Concepts, Kawasaki rider Zach Bell had his eyes on continuing his NGPC form. Zach hadn’t lost an NGPC he’d entered on his KX450, dating back to the beginning of last season. Bell’s stablemate, JP Alvarez was aiming at his first Pro II class win. He’d shown the speed to compete at the front and seemingly just needed to put all of the pieces together to hit the top spot.

Zach’s weekend began with him finding the ground in the first turn of Saturday’s Open AA race while vying for the hole shot. After remounting, Bell was able to work his way through the field and claim the victory. Though much of the Pro field use the AA race as more of a practice, Zach’s pace and comeback set the stage for a positive result on Sunday.

The Pro race used the metal starting gate and Zach ripped an uncontested hole shot as the pack entered the first corner. Because of the rain, conditions were a little sloppy early-on, but Bell was able to smoothly pull out a gap over the field. Through the first couple laps, Zach was steadily extending his advantage, amassing nearly forty-five seconds. But then disaster struck, as Bell was forced to pull to the side with a mechanical issue. Unfortunately, he wouldn’t be able to rejoin the race, suffering a DNF on the day.

JP had a successful start to the weekend, taking second place in the 250 AA race that takes place on Saturday afternoon. Alvarez felt confident in his bike and ready to tackle the ninety-minute Pro II main event the following day.

As the gate dropped for the Pro II field, Alvarez entered the first corner inside the top-three. Through the first few sloppy turns on the motocross track, Alvarez diced his way into the lead. The KX250-mounted rider then held the lead to the paved section of the course—about halfway through the first lap. While traversing the wet asphalt, Jake played it cool so as not to make a mistake, but lost the lead to a less-cautious Mateo Oliveira. From there, Alvarez settled into second place, steadily stalking the KTM rider. As the white flag came out, JP wicked up his intensity and closed the gap to the leader. As the lap wound down, Alvarez made the critical pass for the lead and instantly pulled a couple bike-lengths to prevent retaliation. Through the final few sections of racecourse, Alvarez was able to maintain the lead and take his first Pro II-class victory of the season.

“Such a mixed emotion on this one. We should have taken the double win this weekend in the Pro and Pro II classes. But, unfortunately, something happened with Zach’s bike and he had to pull out. As a team, we’re absolutely distraught this happened. We take a lot of pride in being mechanically sound, so to have this issue definitely hits us in the gut. Zach was far and away the fastest rider out there and should have taken an enjoyable victory. Of course we’re going to regroup and take whatever steps we can to prevent this happening again.

“On the flip-side, I’m so stoked for Jake. He seemed to have a plan when Mateo got by him, and calmly settled in. Then, after the pit, he turned it up and closed back in. To have that confidence, and then be able to make the pass on the last lap, made for an impressive performance. I definitely look forward to his continued progress and more performances like this one.”

Top-5 Results in Each Class