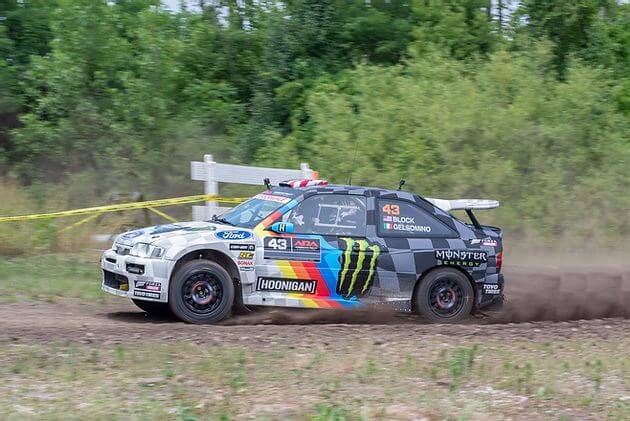 Chillicothe, Ohio ~ It has been the better part of seven months since the American Rally Association held a competitive stage rally. SEVEN MONTHS OF NO RALLY!

As the COVID-19 Pandemic went through its roller coaster over these past few months, many motorsports were left wondering when, and even if, they would return to racetracks, trails and stage roads. This weekend, the ARA is back in action, thanks to the exceptional work put in by so many, especially the leadership team at Southern Ohio Forest Rally.

There were sacrifices for the event to proceed, including a one-month delay, a one-day rally and the ability to only utilize two stage roads inside the Shawnee State Forest. But even with a stacked field of more than 60 cars, it’s a safe bet that when SOFR comes to its conclusion around three in the morning, everyone will be talking about just how grueling, and awesome, these stages were.

During Friday’s recce session, it was evident early on that the first stage that was going to be a workout. Many have compared it favorably to the stages the series sees in New England, or even next month’s event, Ojibwe. Overhanging canopy and tight, twisting roads dot those events, but the SOFR stages take it to another level. There are very few real straight stretches that drivers will be able to use their legs and gain top speeds. Both roads are tight, like sardine can tight, throughout. Then comes the turns. Hairpins run aplenty, and just about every section is right, left, right, left, with crests into those turns. By the end of the first loop, arm and shoulder fatigue will become a real factor.

The first stage runs just over 16-miles, with stage two knocking out another 12 before teams return to service. With the rally starting at seven p.m., the available daily light will quickly dwindle to darkness. Top that off with a healthy coat of dust thanks to the on-going hot and dry conditions in the region, and the 85-mile venture will be equally as grueling as any national on the ARA schedule.

The field is also ready. Cars are as crisp and prepared as ever, with most of the field not having run a rally in 2020 due to the shutdown.

Leading the way will be current ARA points leader Barry McKenna, who won Sno*Drift in January. In March, he ran the WRC event in Mexico, and has decided to bust out his 2020 Skoda Fabia for SOFR. All eyes will be on the new ride and how it performs at such a technical race.

He will be in the seeded-draw with Travis Pastrana, who makes his full-time return to rally as the leader of the Subaru Motorsports USA/VSC program. Pastrana will be without longtime co-driver Robbie Durant, and instead will have Chrissie Beavis Johnson to his right this weekend.

Brandon Semenuk joins Pastrana under the Subaru awning this season. The Red Bull athlete is working with John Hall this weekend and will be expected to continue the teams winning tradition. He has the skillset necessary, having won in Canada over the past few seasons.

Jeff Seehorn opens things up by moving into the Open 4WD class. He shaved about 200 pounds off his 2015 Subaru WRX STI in the off-season and is looking to add a second ARA overall win to his trophy case (after winning in Idaho in 2019).

Ken Block makes his 2020 rally debut inside the Hoonigan Racing 1994 Ford Escort Cosworth. Block last raced with the ARA at 100 Acre Wood in 2019 but retired from that rally due to mechanical. Block has been extremely involved in pre-event prep for this event, running extra practice sessions and diligently working on recce both days.

The field doesn’t end there, with Joseph Burke running the JRD EVO, Patrick Moro, Seamus Burke, and Dave Wallingford (as part of the six R5’s running at SOFR). There is a lot of talent in Southern Ohio this weekend, and mixed with the great stages, there will be plenty to discuss coming Sunday morning.

The ARA East Regional will also have a full field. Thirty-eight cars will attempt the 85-stage miles on Saturday and Sunday. Paul Ferreira, Zachary Whitebread, TJ Pullen, Derek James, Calvin Cooper and so many more will all be looking for class wins at SOFR.

With the event being closed to the public, the ARA urges you to follow the live tracking on the ARA app. Live timing and scoring will be available on the app as well, or on the ARA SOFR page. Constant updates via ARA Facebook, Instagram and Twitter will be made available. And several live hits will take place via ARA YouTube page. Please keep in mind that coverage will be limited on-stage as there is near zero cell coverage.

Story and photos courtesy of americanrallyassociation.org