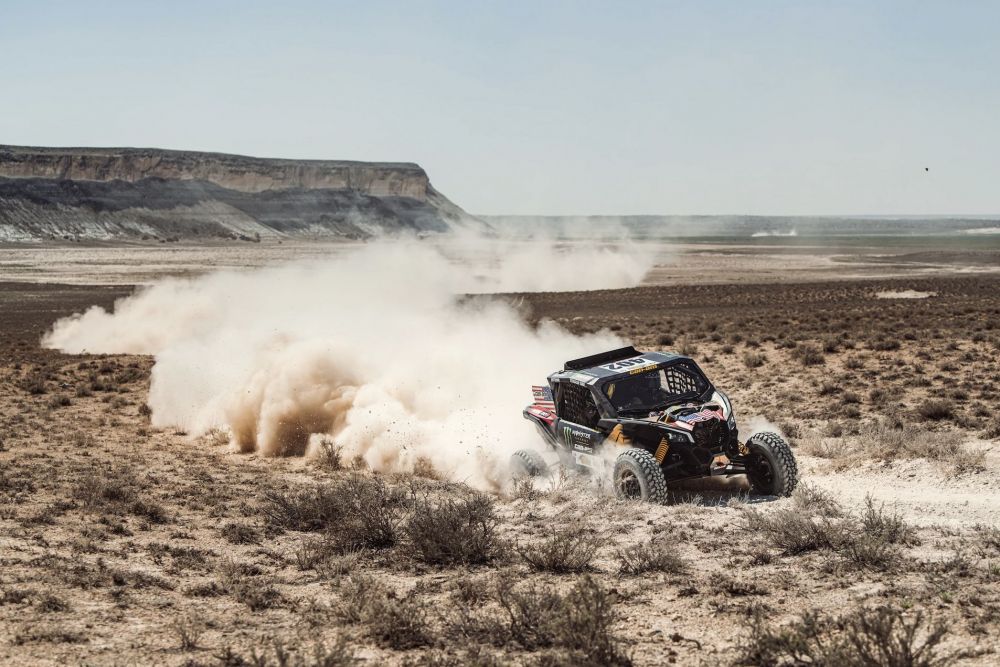 In the world’s largest landlocked country, Rally Kazakhstan was a demanding five-day endurance competition in the arid south-western deserts of Central Asia. Round 2 of the FIA ​​Cross Country Rallies World Cup series was once again dominated by the South Racing Can-Am, going 1-2-3-4 in the T4 division. Most impressively, Team Tensor Austin Jones ran at an incredible pace to put his Monster Energy Can-Am into the winner’s circle and also 5th overall in the entire rally on Tensor Tire DS30.

Kazakhstan has hosted the FIA World Cup three times before, but 2021 opened up a new challenge for rally racers. The stages would start and finish just outside the city of Aktau, which is located right on the shores of the Caspian Sea. New this year was a 250 kilometer Marathon Stage with a remote overnight stay where only the competitors would be allowed to work on their vehicles, forcing serious strategy into everyone’s race. The event started with an optimal finish for Austin (AJ) Jones on the first stage of 280.22km. A considerable lead put him well ahead of his category competitors and ranked Jones into the overall standings. The first stage of the rally must have transpired in the blink of an eye for AJ as he had recently logged 55 hours traveling from the USA to arrive in Aktau, Kazakhstan. “It was excellent,” Jones reported after completing the first leg. “Very, very fast tracks all day. The course was very uneven and a little sketchy if you are going fast. We got knocked around quite a bit, but it was fun. It is my first time coming to Kazakhstan and it’s very exciting being here. We have a lot of momentum coming off of the Round 1 win. I am excited for what’s to come.”

With his lead now padded, Austin and his South Racing Can-Am team principles developed a strategy to preserve the vehicle while running in contention by time.

Austin stated at the end of the second stage. “We drove about 70%. We were conservative in some of the rocky sections. We did not want to do any work on the car when we got here so we tried hard to keep it in one piece. We did just that, the car is perfect and fast! Averaging 93 KM/hour in the Can-Am.” AJ again held the strategy the following two stages, staying on the pace of the T4 competitors and South Racing Can-Am teammates running it clean back to Aktau trouble-free. The South Racing mechanics were able to do a full service before the final stage. With assistance from his Brazilian navigator Gustavo Gugelmin, Austin leveraged the huge opening stage win and parlayed that into an impressive fifth overall finish. Jones’s total time on course was 17 hours, 57 minutes, and 22 seconds to compound this feat. And 30 minutes and 36 seconds quicker ahead of the second-place finisher. When the rally had concluded, AJ shared his thoughts:

“The landscape has been stunning being able to race right on the coastal beach of the Caspian Sea. The plan came together perfectly and brought home our second win in a row and 5th overall! It was a great week in Kazakhstan riding on Tensor Tires.” – Austin Jones Monster Energy Can-Am (South Racing Can-Am)

With another big win for Austin Jones, he now enjoys a comfortable lead over his teammate Kees Koolen in the FIA T4 Championship going into the next event, the Silk Way Rally. Overall, South Racing Can-Am is the dominant force in the T4 division, taking home the win and 3 Podium finishes over two categories for one strong weekend, all running Tensor DS30 & Method Race Wheels. Tensor Desert Series (DS) Tires are ideal for UTV platforms and hold up to the rigors of extreme off-road rallying racing. Cross country rally racing is brutal on equipment and the ultimate stress test for tires. Racing day after day is a true testament to the Tensor DS superior design and construction.