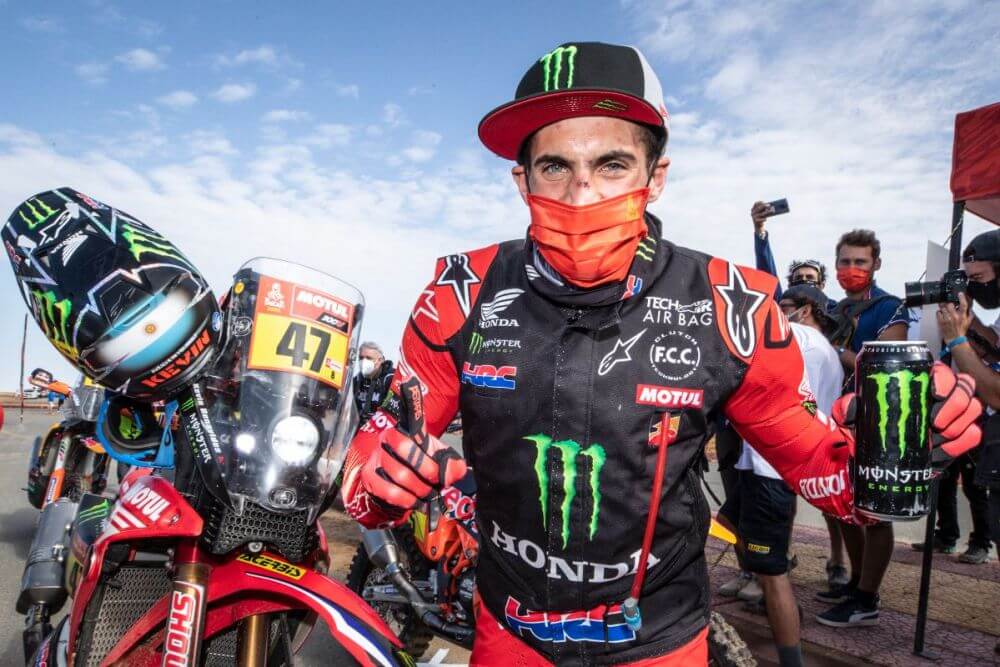 After an incredible 4,767 km of non-stop racing through some of the harshest terrain on the planet, the Monster Energy Honda Team have emerged with a stunning double podium result at the 2021 Rally Dakar – giving Argentina its first Dakar motorcycle champion, and Honda’s first 1-2 since 1987.

Kevin Benavides wheelies his way into the record books by becoming Argentina’s first rider to win the event in the motorcycle category, followed closely by team mate – and 2020 Dakar winner – Ricky Brabec in second position; who was only four minutes and 56 seconds behind Benavides after the gruelling two-week long event. In fact, such was the ferocity of Brabec’s charge at the end of the 2021 Dakar, that the US rider took victory on the 200km special stage on the final day of competition – leading the field back to the finish in Jeddah.

After crossing the line, a stunned and emotional Benavides said: “I enjoyed the final day for sure. It’s impossible to make a whole two weeks at the Dakar perfect – the important thing is always to continue, stay calm and focus day-by-day. After my crash on stage five I was really worried that I wouldn’t have a chance at victory. I hit the ground so hard, especially with my head, and I had a lot of pain in my ankles; I really thought that my Dakar was finished.

“I just tried to keep pushing and continue with the race, and it has really paid off. I always just try to go day-by-day with the Dakar; you can’t think too much about the overall win because the event is so long – it hasn’t sunk in yet! I’m so proud to be the first South American rider to win the Dakar. I had a dream to make history like this – but I never really thought it would become reality. It is absolutely amazing . It’s also an incredible result for the team – finishing 1-2 with Ricky. Nacho had a really bad crash, and Joan had some problems at the end, but I think we did a really good job as a team. The bike was just so good and reliable too – and the team have worked so hard; I’m very very proud to be a part of this history.”

Brabec, who had been pushing hard to follow up last year’s dream result at the Dakar, said: “The road book was super difficult this year, so it made the results flip-flop back and forth; it was a super interesting rally from that point of view. At the end of the day we won 1-2 by a handful of minutes, and Sam was in third, only a few more minutes behind – so the results were really close. This made for a wild Dakar this year. I wasn’t even born in 1987 when Honda last did this – so it’s so so cool to go 1-2 again and be a part of that history.

“Unfortunately Joan retired yesterday; it would have been really cool to have him on the podium as well. I’m just really stoked to be on the podium again – I guess that makes me one of the only Americans to be on the podium twice! I’m just adding to my Dakar trophy family! Even now I’m already determined to learn from the mistakes in the first week and come back stronger again next year! For sure 10 days ago I never thought we’d have a shot at the podium, and even three days ago I was 50 seconds off the lead – I had high hopes, and never gave up! We did our best. I rode my ass off this week, but second place is hard to swallow – so I definitely want to do better next time!”