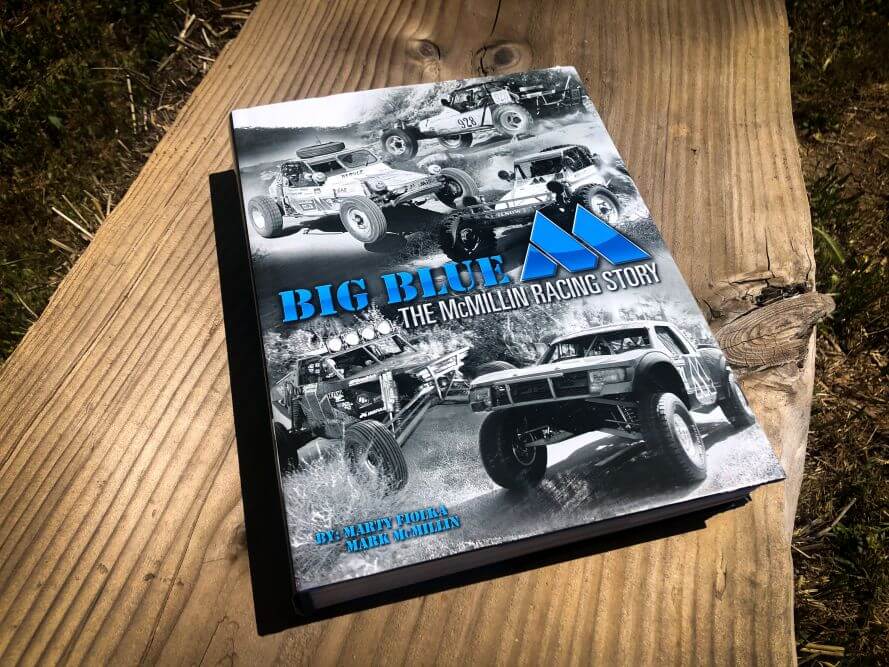 For the first time in the sport’s history the story of one of the most legendary off-road racing teams and families is told, in “Big Blue M.”  Written by Marty Fiolka, an avid off-road enthusiast and racer.  Marty is quite the veteran of the sport having raced the famous Baja circuit many times, and even was the associate producer of the iconic Baja 1000 documentary “Dust to Glory.”

With forwards from Mark McMillin, Sal Fish and Frank DeAngelo, and design and photography by Bill Bundle III, Boyd Jaynes, and Trackside Photo, this book comes together in incredible fashion.  Below are a few images telling the iconic story.

“From a purely business perspective, the incredible life story of Macey McMillin Jr., known most of his life as Corky, is the stuff that dreams – and bestselling books – are made of.” is how Foilka begins the book. A complete introduction, and background of the family’s Patriarch Corky McMillin. “He won at racing. He won at business. He won at life, and yes he did it his way” Marty continues. This beginning section of the book is a truly fascinating look into who and what started it all.

By 1981 things really began to take shape as McMillin Racing was finding their groove. Corky’s two son’s Scott and Mark had been impressing race fans for years, and now had replaced their original cars with much higher quality vehicles, it was quite evident they were on a roll.  The McMillin boys came to win. The images and stories in the section are a vital part of the race teams history, with the iconic “Macadu” and “Beagle” championship cars piloted by the brothers are pictured throughout, while incredible stories are told.

As the book progresses, a new era of McMillin racing is born and the 3rd generation joins the McMillin Race team. Brothers Dan & Luke (Mark McMillin’s sons), and their cousin Andy (Scott McMillin’s son) have been cruned to race their entire lives.  For years they have helped out at their father’s races, but it was time they climbed into the vehicles themselves. This era began around 2001, and like the beginning of the book, this is a truly fascinating period for the team.

The Heart of a Father, is the Masterpiece of Nature

In 2005, the McMillin Race team, family, and the world lost the man that started it all. Corky McMillin had passed away, and the book shares a very touching tribute. Including his memorial service aboard the USS Midway Naval Carrier Museum, which he was a founding member.  Team McMillin still had a lot to prove, and they would soon dedicate their future races to their late father, and grandfather, and friend.

Scott McMillin’s daughter Jessica is also a vital part of the racing team, as her story is shared in depth with other members of the family. “My race all-time race highlight happened during the 2011 SCORE Baja 500. I encountered a huge flooded zone which had turned the Baja dirt into deep mud, stopping us dead in our tracks.  After being struck in the extremely deep mud for a few minutes, things were looking grim. However, that only lasted a brief moment as a small group of Mexican fans ran up and began trying to free us by rocking the truck back and forth.” Jessica explained in a section discussing her career.

At the start of the 2013 racing season she made history joining forces with Heidi Steele and became the first all-women team. They did this in the infamous Truck Truck Class, the biggest baddest vehicle class on the course.

The book continues on, and so does McMillin Racing as they continue to dominate the sport.  The final pages list the countless wins, and podium finishes McMillin Racing has achieved from 1976 through 2014. To give you an idea how dominant the team has been, this continues on for not 2, not 5, not even 10, but 43 pages!  It’s pretty impressive to read.

The stories, photos, and quotes in this 535 page legacy is truly remarkable, Marty Fiolka created a true Masterpiece indeed. To be able to capture its full capacity in a short write up such as this, is literally impossible. We hope someday there will be a Volume 2, since the team shows no signs of slowing down, with Luke McMillin taking 1st in the 2019 King of the Hammers, 2nd in 2020 and a month later finishing 1st at the 2020 BFG Mint 400, 32 years after his father Mark took the checkered flag.

Stay tuned for more history to be made by team McMillin….As well, we will periodically be publishing chapters from the book.
This piece of racing history can be purchased at DirtCo.com