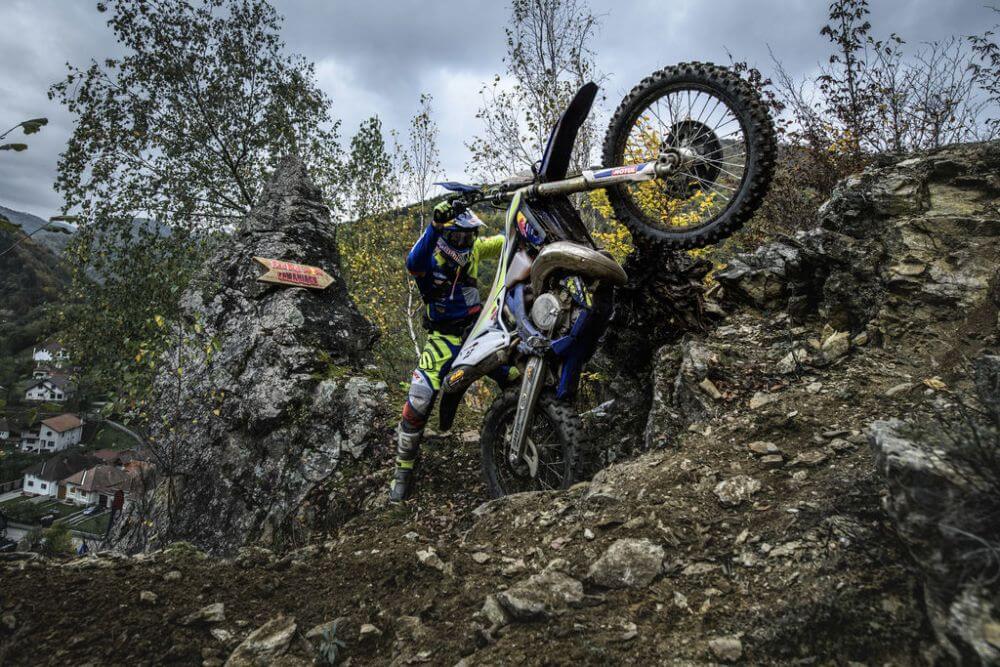 Big day for Graham Jarvis who has now title no. 7 in reach

Sibiu, Romania, October 30, 2020 – Offroad Day 3 of the 17th edition of Red Bull Romaniacs, located in the Cugir-Șugag area, presented the competitors with a very cold and wet morning. The hardest day of this Vertical Madness edition became even tougher after heavy rains during the night. In order to reassure some chance of surviving the day, the track managers set out in the early hours of the morning to eliminate some of the extremely technical accents and descents which would have become impossible or drained every ounce of energy from the competitors. Despite doing this, today’s tracks were, by far, the hardest of them all and left the competitors exhausted at the end.

Manuel Lettenbichler (DEU/KTM) was first to start, having won yesterday and sitting in first position overall so far, followed by Wade Young (ZAF/SHERCO), 3 minutes behind and by Graham Jarvis (GBR/HUSQVARNA), another three minutes behind, then Alredo Gomez (ESP/HUSQVARNA), Billy Bolt (GBR/HUSQVARNA) and Mario Roman (ESP/SHERCO).

Letti started the first part of the day well, managing to keep his distance from the rest of the pack for the first two checkpoints, after which he seemed to slow a bit giving Jarvis an invitation to steal his thunder. Jarvis brought all his skills to the table today. By checkpoint 3 he was only 1 minute behind and by checkpoint 4 it was a repeat of yesterday, riding shoulder to shoulder, this time maintaining a good distance from the rest of the pack.

Things didn’t go so well for Alfredo Gomez who made a few mistakes which he was unhappy about and that ended up costing him valuable minutes. Despite their best efforts, neither Young nor Bolt managed to threaten the two leading competitors, who today seemed to be in a league of their own. Mani repeatedly tried to gain distance from Jarvis, he had moments when he chose better lines and broke away easily, but the experience and impeccable technique of the veteran rendered all attempts impossible. It was Graham Jarvis who descended the steep face dropping down to the finish line first, followed a few seconds later by Manuel Lettenbichler and then by Mario Roman, who regained his confidence and had an excellent race today, starting 6th and finishing 3rd.

Judging by the overall standings, it seems that tomorrow there will be a duel for the title of the Vertical Madness 2020 edition. Jarvis and Letti are separated by only 25 seconds in Jarvis’ favor, he will also start first tomorrow. It’s hard to believe that Wade Young, 13 minutes 56 behind the leader or Alfredo Gomez, 14 minutes and 48 seconds behind, could still manage to claim first place, but in hard enduro miracles, or mistakes, have been seen before and the title is on the line until the last second.

In the Silver class, Peter Weiss (DNK), who held the lead by less than 4 minutes yesterday, rode incredibly today, increasing that gap to 13 minutes and 38 seconds, a difference that will be difficult for Fabien Poirot (FRA) to overcome. Joe Deakin (GBR) stands in third, over an hour behind.

In Bronze today, Eddie Findling (DEU), who had been leading up until now, lost the day to Hugo Bernard (FRA), who was 57 seconds faster. However, Hugo still has a gap of 8 minutes and 54 seconds and all his hopes are on tomorrow, the final day of the competition. Alexander Gehlert (DEU) is overall third, 39 minutes, 44 seconds behind.

In the Iron class, Mani Gyenes (ROU) gained another 5 minutes and 24 seconds, totalling a 6 minute, 4 seconds lead over his rival, Romain Courty (FRA), who came in third today. In second place today was Murray Shooter (IRL), 26 minutes, 9 seconds behind.
Mani Gyenes, who typically competes in Silver or Gold class, suffered a broken leg earlier in the year and could only compete at Iron level where he stood less chance of having to get off his bike. The Satu Mare resident has successfully crossed the finishing line at all 16 previous editions of Red Bull Romaniacs and was determined not to miss the 17th.

Offroad Day 4, the final day of the world’s toughest hard enduro rally, will start at 07:45 tomorrow in Sibiu County. Gold class riders have a 107 km of tracks ahead of them, which will end in the Station Square, on the top floor of a building under construction. As per tradition, Andy Fazekas, the Red Bull Romaniacs prologue and finish designer, has created the finish. The fastest estimated time is 4 hours and 40 minutes. The Silver class competitors have 108 km tomorrow, the Bronze class 111 km while in the Iron and Atom classes the final day will be 87 km and 71 km, respectively.