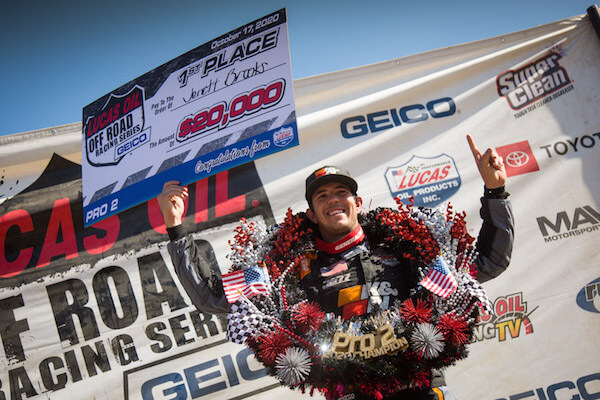 Poway, CA – BILSTEIN short course racers did it again in Rounds 9 and 10 of the Lucas Oil Off Road Racing Series (LOORRS) with two podium sweeps—bringing them to a total of five BILSTEIN sweeps in the 2020 Pro 2 season.

Even better, once the dust had settled and the points were tallied, the BILSTEIN team took to the podium once more as the top three season points finishers: Pro 2 Champion – Jerett Brooks, second place – Doug Mittag, and third place – Ryan Beat.

Brooks is no stranger to the championship wreath, as this 2020 Pro 2 championship repeats his success as class champion last year.

“Back-to-back Pro 2 champs!” he exclaimed. “Wow, what an insane year with seven wins. Coming into the 2020 season, we brought everything in-house, which was always a dream to build trucks with help from Tanner and Nick. We went above any beyond on this Pro 2 build!”

And proved more than a few doubters wrong along the way.

“The number of people who said the truck would never work was crazy. It was for sure the fastest truck all year. I really want to thank everyone who makes this team go round—it’s an insane amount of work, but it all pays off!”

Meanwhile, Mittag had quite the surprise year as LOORRS decided to dissolve the Pro 4 class in which he usually races only weeks before the start of the 2020 season. Fortunately, he was able to get a Pro 2 truck put together at the last minute and then went out and ran fast.

Taking home the silver for the season, Mittag reflected: “First place and fast lap yesterday [Round 9], but we lost the championship by two points. It’s definitely a bittersweet day, but either way, I’m really proud of my team and what we were able to accomplish after switching classes on such short notice and basically building a truck in 20 days. A lot of individuals, businesses and sponsors helped us along the way to make it happen.”

Beat rounded out the all-BILSTEIN season championship podium. After years of success and championships in Pro Lite, he called this year’s third-place-winning Pro 2 season a “crazy ride.”

“It was my first season in the premier Pro 2 category, as well as my first season as a multi-car team owner [Ryan Beat Motorsports]. This year had its struggles, but the victories outweighed the defeats. We were the only team to give its partners a national schedule, which meant double the work and effort, all while still being a top contender wherever we went. I am so proud of our hardworking team members. This kind of greatness doesn’t happen without great, driven and likeminded individuals, so thank you!”

BILSTEIN expressed pride in its talented group of racers, and is already looking ahead to returning to competition in 2021