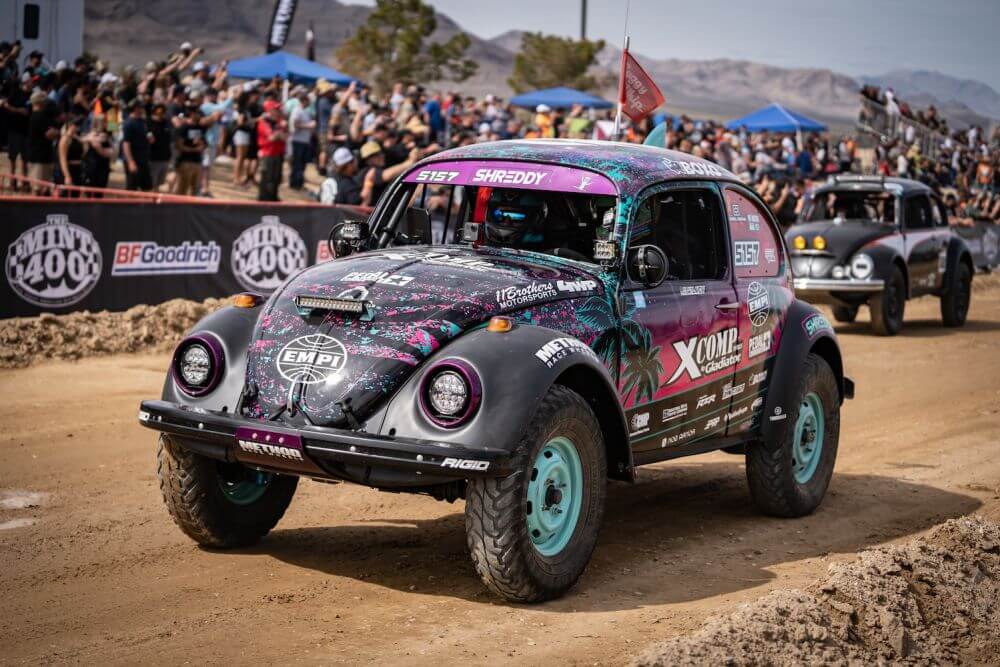 The Most Grueling Race in the United States

We set out on this journey with under six weeks to build a class 11 car and race the Mint 400 for nothing but a finish. Class 11 is known as the stock VW class and the warrior class because it is a very competitive class yet somewhat basic some might think. Any form of racing has its tricks and ways to modify a cars performance and prove it worthy. My team and I did just that. We through all of our common knowledge at this class 11 car we called the SLUG SHARK in order to show up on race day with a competitive car.

As the car was being build I documented the build on my YouTube channel which gained a lot of traction. The how to build series showed a lot of people a lot but not all of my tricks when building the Slug Shark. Showing up to Fremont Street in Las Vegas with the Slug Shark I knew people had followed the build but had no idea it was as big of a deal as it was until seeing the old to the young take pictures and ask questions. The relatability to a VW Bug has made an everlasting impact on the offroad community that will never be diluted it seems like. Coming into race day after vibing with everyone on Fremont street I knew I had to finish or give it all I had for everyone involved and watching her debut!

Race day once again cameras were out and the hype had come down to make or break time! Staring out 10th out of 11 seasoned class 11 builders/drivers it was go time. Seeing the shaka on the starting line by a ton of fans standing on the fence line was humbling and the skinny pedal was ready to hammer down! Getting the hole shot next to my competitor we were off.

First lap we had pulled into pit A to make a minor shock adjustment on the fly with the King Shocks clickers. A quick look over and everything was solid and we were back on track in under a minute. Passing class 11 cars that couldn’t keep up with our pace or were broken our spirits were high and the car was solid! Through a super rough section I did get bucked a little through some deep whoops. I learned quickly how fragile the stock Vw wheels were as I tacoed a wheel bad. A quick change and we were back on the road like it never happened. Mile marker 105 of 107 on the first lap we stoped at main pit to fuel up and make one more suspension adjustment, new spare tire as well as a co-driver change. Running strong we kept charging hard into the night sitting around fifth place.

Second lap after getting more familiar with the car I was getting in the grove and pushing hard knowingly the Slug Shark was on the hunt! With zero issues and zero pit stops needed on lap 2 we came across the finish line all smiles being greeted by our team and fellow enthusiast! Receiving a Mint 400 finisher medallion by Matt Martelli the owner/promoter of the Mint 400 was a special feeling that’s unexplainable. After many sleepless nights and efforts by so many this was a goal I set out to achieve and an accomplishment many involved got to celebrate! 2nd place in my eyes was a win! Winning against the course and the odds of us finishing a fresh car with little test and seat time proved that we were a forced to be reckoned with in future class 11 races!

Respect to all the other class 11 warriors out there who have fun in such a simple class. The elements are a true testament to these race cars and driving smart is a big part of racing. We will continue in this class 11 journey as well as the new main focus on the Trophy Bug I’m calling the Mako Shark while sharing the build and story leading up to the Mint 400 debut in 2021. Your support has been appreciated by not only myself and my team however many whom we get to share the story with. We have built a new culture in offroad through Shreddy and hard work! Many more adventures and stories to be shared again thank you!