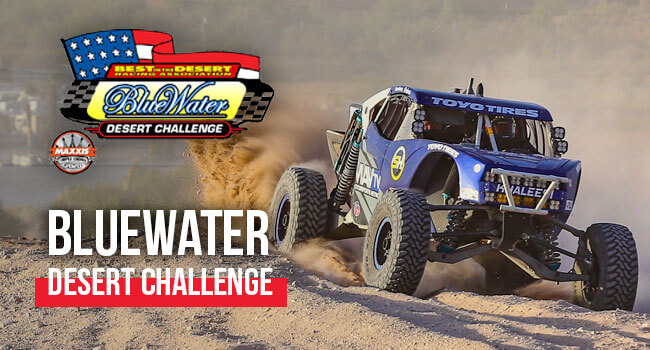 BlueWater Desert ChallengeEnd of a Demanding, Yet, Successful 2020 Season

LAS VEGAS, NV (Oct. 28, 2020): The BlueWater Desert Challenge made its epic finale on Sunday, October 25, 2020 in Parker, Arizona. As the final racers passed the finish line and the dust began to settle, Best In The Desert fans, racers, and organizers celebrated the end of a remarkable series that tested everyone and showed the resilience and capabilities of the off-road racing community.

It was fitting that the final race of the year ended in Parker, Arizona where the series started with the 2020 Tensor Tire “Parker 250” Presented by Polaris back in January. The Parker community welcomed back the Best In The Desert family with open arms and the air was electric at the Event Expo and Contingency and Tech lining downtown streets. Racing proceeded over four days with a record breaking field of 334 teams vying for top spots, crown titles, and huge prize purses.

The 22.8-mile course was mapped out on Colorado River Indian Tribe (CRIT) land and the event would not have been possible without their help, blessing, and good will.

Racing started on Thursday with Time Trials for Trick Trucks, Class 6100 and 1500. Jason Voss took home the top spot in qualifying followed by Justin Lofton. Friday, October 23, 2020 saw the start of the 4 Wheel Parts Youth UTV Races. A full house of Youth UTV competitors made for some truly great racing.

Dallas Gonzalez took home the UTV Y 1000 class win ahead of Ethan Groom and Kaden Danbury. The UTV 170 Class was won by TJ Siewers with George Llamosas and Jaxon Leaming coming home second and third place, respectively. In UTV Y 250, Travis Sallee from Barstow, California was the class winner with Chaden Minder and Jack Gonzales tailing close behind. The UTV Y 570 Class was won by Kendall Felker followed by Ryder Hall and Chase Mankin. Finally in the UTV 170 Mod Class, future star Chase Mankin took the win with Deegan Gonzales and Jackson Mandle rounding out the podium. Final Class Championships and points standings will be announced in the days ahead.

With racing taking place over two full days of racing combined scores and lowest elapsed times would determine the overall winners. The weekend then started strong with a who’s who in offroad racing. Conner McMullen came in hot winning the first race of the day on Saturday and the Sportsman/8100 Class Overall. Other notable winners from Day 1 included Garret Allred taking home top honors in Class 4700 followed by Rob Seubert in car #4724 and Andrew Hulse in car #4733. Josh Cobb won Class 6000 followed by Larry Schmueser and Gregg Bragg in Trophylites. Randy Merritt was first in Class 7200.

Sunday, however, was the real test as the races, consisting of three and four laps depending on the vehicle class, combined with Saturday’s results determined the overall winners of the Best In The Desert 2020 Class Championships, the Maxxis Triple Crown, and the Adventure Series.

Classes across the board experienced some of the closest racing ever seen with most wins decided by mere seconds. Due to the finale of various championships and crown titles, Best In The Desert will pay out in excess of $675,000 marking the 2020 Best In The Desert race season the richest off-road purse in the history of the sport.

Next up was Race #3 featuring the UTV Class, one of the most competitive classes of the weekend with overall titles determined by seconds. Austin Weiland put in an absolutely spectacular race on Sunday to come from behind and win the UTV Turbo Class and a $7,500 bonus from the Maxxis Triple Crown. Weiland was followed by Dustin Jones and Phil Blurton only two minutes from the top spot. Blurton, however, won the highly coveted 2020 Best In The Desert UTV Turbo Production Class Championship as well as the Maxxis Triple Crown UTV Championship wrapping up an absolutely spectacular year with Best In The Desert earning over $23,000 in bonuses paid out on top of normal prize money.

The UTV Unlimited Class win then went to Randy Raschein hailing from Brownsville, Oregon who also concluded the Unlimited Class Championship for the year after a season-long battle with Michael Isom who drove every mile of the 2020 season. Chris Blais won the UTV Rally Class against a very strong 30-racer field. Cameron Meister came in second place followed by James Hill only two minutes behind. The UTV Pro Class was won by Kaden Wells followed by Seth Quintero in second and Dominick Gaglione in third with just three minutes separating the podium after two days of rough racing. As a result with throwaways, it looks like Seth Quintero is the 2020 UTV Pro Class Champion by one point. Talk about close racing.

In the Car/Truck Divisions, the racing was extremely fast and furious with Championships being decided by just a couple of points. In Class 6100, three racers were separated by a single point coming into the finale. Kyle Jergensen and Ray Griffith were tied with Troy Messer one point back before the BlueWater Desert Challenge. When the dust cleared after the final race, Kyle Jergensen wrapped up, without question, what was one of the most competitive classes all year long. Jergensen was named winner of Class 6100, and the 2020 Best In The Desert Series Class 6100 Championship. He also took home the 2020 Maxxis Triple Crown Limited Class Series bringing home a total of $17,500 in bonuses on top of his regular payout during the course of the season. Dustin Grabowski also put in an amazing race on Sunday coming from behind to finish in second place. Ray Griffith came home third overall and second in the Championship chase. Conner McMullen wrapped up the championship in Class 1000, winning at the BlueWater Desert Challenge as well after dominating the class all year.

Finally, the Trick Truck race was nothing short of impressive. After winning the first day of racing, Justin Lofton had to overcome a flat tire and charge from behind to take the overall win on Sunday. Lofton’s win was a long time coming after experiencing various technical issues at other races during the year. His reward was a $25,000 bonus from the Maxxis Triple Crown on top of his normal payout. The big winner on Sunday was the #70 Thompson/Letner Trick Truck who, by finishing second place at the BlueWater Desert Challenge, won the 2020 Best In The Desert Trick Truck Class Championship. Pre-race Trick Truck points leader Jason Voss, unfortunately, had a major crash at the start of the first race day and did not finish (DNF). Best In The Desert veteran Steve Olliges who had one of his best years ever finished second on the podium in the Trick Truck points championship.

Perhaps the happiest team at the BlueWater Desert Challenge was the #1529 Class 1500 team of Brandon Bailey and Jason Dudley who, by finishing third in Class 1500, wrapped up the Maxxis Triple Crown Unlimited Series Championship. The Maxxis Triple Crown season bonus is worth $25,000 on its own resulting in quite the payday. #1553 Brad Wilson dominated both days of racing in Class 1500 handily winning the Class followed by Jake Johnson and Brandon Bailey.

Bryan Folks, CMO and owner of Best In The Desert, commented, “2020 will go down in the record books as a season to remember. It’s one that tested our organization like no other. We overcame some serious obstacles and challenges with COVID-19 but came out the other side stronger for it. I want to take this opportunity to personally thank our staff, our volunteers, our sponsors, all our partners around the Southwest including all the land use agencies and private land owners. I especially want to thank all our racers. Without you, none of this would be possible. We sincerely appreciate the confidence and support you’ve shown in us. As 2020 comes to a close, we are getting together as an organization to see how and where we can improve to better serve our customers and our partners. We know we have a lot of room to grow. Thank you for the opportunity to become a better racing series and organization.”

Best In The Desert Race Operations Mgr. Jeff Phillips echoed the sentiment, saying, “I too want to thank our hardworking staff and volunteers for all their efforts and helping us make this series what it is. With the benefit of a little breathing room, we are going to sit down and evaluate how to improve and better serve our racers and partners. 2020 was definitely a year to remember. However, we now look forward to 2021 to figure out how to do an even better job of putting on the best off-road races in the world. In that vein, I have an open-door policy. Don’t hesitate to contact me directly if you want to give feedback or your input on how we can better serve our racers. Thanks again to everyone for making 2020 so special. Onward and upward to 2021.”

Everything you need to know about Jesse Jones' Heritage Livery Previous post
WORCS ChampionshipRounds 6 and 7 | Blythe, CA Next post