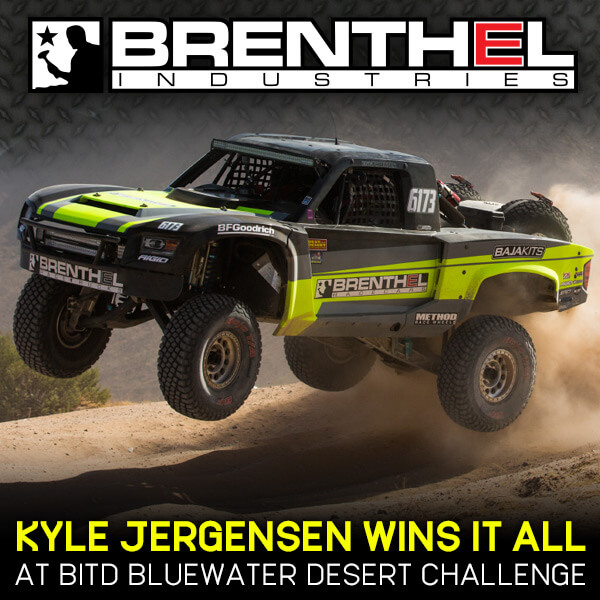 Parker, AZ
Brenthel Industries top wheelman, Kyle Jergensen, worked his magic for the Best In The Desert(BITD) Bluewater Desert Challenge in Parker, Arizona, to complete the 2020 series in a big way. Jergensen piloted the #6173 Spec Truck to the pole with the top qualifying time, and then the overall division victory, with a 1st place finish on Saturday and a 2nd place finish on Sunday. This race win and excellent performance pushed Kyle into the points lead to capture the 6100 Championship as well as the Triple Crown Bonus. Additionally, Jergensen was behind the Brenthel Industries #127 Trick Truck wheel to score the quickest qualifier above all other competitors with a 4 Minute, 58.975 Seconds times during the session and 60.206 MPH average speed.

The final round of the Best In The Desert season, the Bluewater Desert Challenge hosted along the Colorado River’s shores returned to Parker, Arizona, after a three-year hiatus. This two-day competition featured separate races, taking place on Saturday and Sunday, a racer’s favorite. Furthermore, this would also count as the final round of the $67,000 MAXXIS Tire Triple Crown.

BITD Officials charted a riveting 22 Mile Course and attracted big entries and large car counts. 26 Spec Trucks entered into the division, but in the end, Kyle Jergensen and the Brenthel Industries Gen 3 Spec Truck was the winning combination.

“The Gen 3 6100 was flawless all weekend and never skipped a beat all season! We locked down the 6100 win for the weekend, the 6100 Class Championship, and the Triple Crown Championship. Thanks to Jonathan & Jordan Brenthel for giving me the opportunity this season, the Brenthel Team is a great group of people and these trucks they are building are tough and fast!” – Kyle Jergensen

The 2020 6100 BITD Championship earned by Kyle Jergensen in the #6173 Truck was years in the making and organized by Brenthel Industries hardworking team of professionals. Brenthel designed and built the truck from the ground up. They prepped the vehicle for each competition and ran race support and pit logistics, all intending to go and win.

Jergensen started the season with a win at the Parker 425 back in January, another victory at the Silver State 300, and then earned the season finale win in the Bluewater Desert Challenge. Brenthel Industries ran multiple trucks at each event and picked up another victory at the Laughlin Desert Classic and nearly swept the BITD Series for 6100 Class 1st place finishes, only missing out on Vegas To Reno. The three event wins by Jergensen in the #6173 Brenthel Industries Gen 3 Spec Truck promoted Kyle to be crowned the Maxxis Tire Triple Crown Champion. This program packaged the BITD Series higher-profile events with bonus cash to be awarded according to the program’s arranged payout.

“Congratulations to Kyle Jergensen on a phenomenal season and well-earned. The season was definitely worth all the hard work, effort, , investment and looking forward to having Kyle on the team next year.” – Jonathan Brenthel.

With the 2020 desert racing season approaching an end, 2021 Best In The Desert Series is scheduled to return to Parker in January for the Parker 425. Brenthel Industries is the most direct channel to get into off road racing contention. They apply their collective knowledge in CAD design, welding, fabrication, assembly, plumbing, wiring and more into every design. Their race prep, chase support, and Arrive and Drive programs have been developed to benefit their own extensive racing experience. When it comes to selecting a builder, you can compromise or insist on the best; Brenthel Industries.

Go to http://brenthelindustries.com or http://www.bajakits.com to find out more about the many services, highly developed suspension systems and race-proven products available from Brenthel Industries.

Eliott Watson wins 8th Pro Buggy race in a row to take 2020 Championship Previous post
Big day for Graham Jarvis who has now title no. 7 in reach Next post