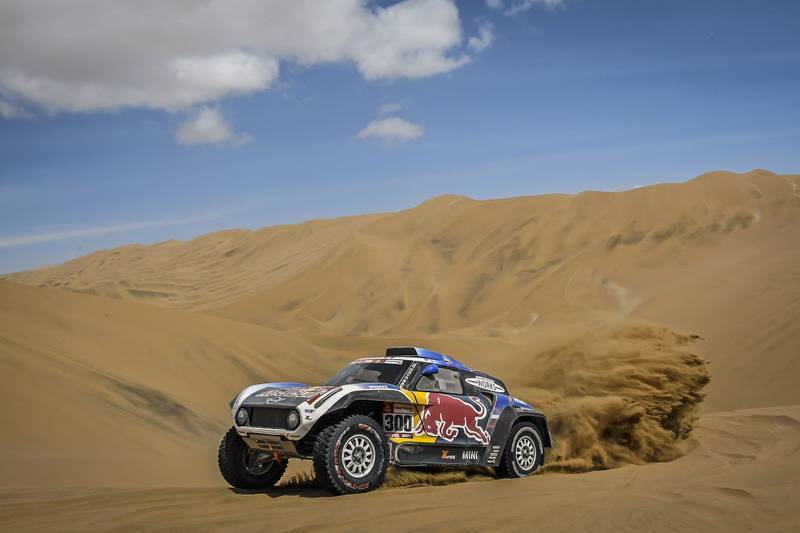 A three times winner of the Dakar, Nasser Al Attiyah will set off from Jeddah as the favourite with the aim of picking up the first title to be contested in Saudi Arabia. The leader of the Toyota Gazoo Racing team will already have to overcome the not inconsiderable competition from team-mates Giniel de Villiers, Fernando Alonso and Saudi driver Yazeed Al Rajhi. However, the X-Raid team is out looking for revenge after last year and boasts a similarly impressive line-up, with Stéphane Peterhansel and Carlos Sainz in particular. Another former winner, Joan “Nani” Roma will be behind the wheel of a Borgward, attempting to muscle in on the duel between the Toyotas and the Minis.

Nasser Al Attiyah wins the Dakar every four years. There is no getting away from it: his name appeared on the roll of honour in 2011, again in 2015, before a third time in 2019. However, mathematical probability is rather random on the Dakar and the Qatari driver especially appears capable of breaking the rule that would not see him earn a fourth title before 2023. The excellent performance level he displayed last January with is co-pilot Matthieu Baumel continued all throughout the season, even if they did miss out on a sixth consecutive triumph on the Rallye du Maroc. On familiar terrain where he will be competing as a next-door neighbour, Al Attiyah’s status as favourite is all the more credible given that the Toyota Hilux that he will be driving has reached full racing maturity. This is also naturally the case for his team-mate Giniel de Villiers, who pipped him to the post in Morocco and could demonstrate his former trademark efficiency on a Saudi Arabian route where regularity looks likely to be key, and this is precisely the South African’s hallmark. Driving the same pick-up, Fernando Alonso will only be able to call upon very limited rally-raid experience, but his vision, driving skills and capacity to adapt put him in the position of a very promising newcomer, particularly seeing as he will have the five time winner of the Dakar on a bike Marc Coma alongside him as his co-pilot.

Designed to reward the teams who display the most endurance, navigational skill and composure, the route of the Dakar 2020 will no doubt appeal to the most experienced drivers. As such, Stéphane Peterhansel with his 13 titles will be a formidable pretender to the crown. Even competing with Paulo Fiuza, a last minute replacement for his wife Andréa in the co-pilot’s seat, “Mr Dakar” will still be one of Al Attiyah’s most serious rivals for overall victory. He will not be the only card that the Mini X-Raid squad can play, because Carlos Sainz will also be driving one of the German team’s tried and tested buggies and he will not be participating simply to make up the numbers. The collective strength of the X-Raid team will also be boosted by Polish driver Jakub Prygonski, who finished just short of the podium last year (4th), and Argentinean Orly Terranova, who gave note to his rivals of his return to form by winning the Baja world cup.

Joan “Nani” Roma, another expert on the dunes, has this year taken a new direction by choosing the German constructor Borgward. The Spaniard, who was runner-up to Al Attiyah in 2019, is counting on the progression of his vehicle to muscle in on the battle for the top places. This is also the goal for Saudi Arabia’s standard bearer Yazeed Al Rajhi, who, after his 7th place in 2019, can lay a very legitimate claim to a better performance on a terrain which he knows like the back of his hand, the sole driver among the favourites to do so.