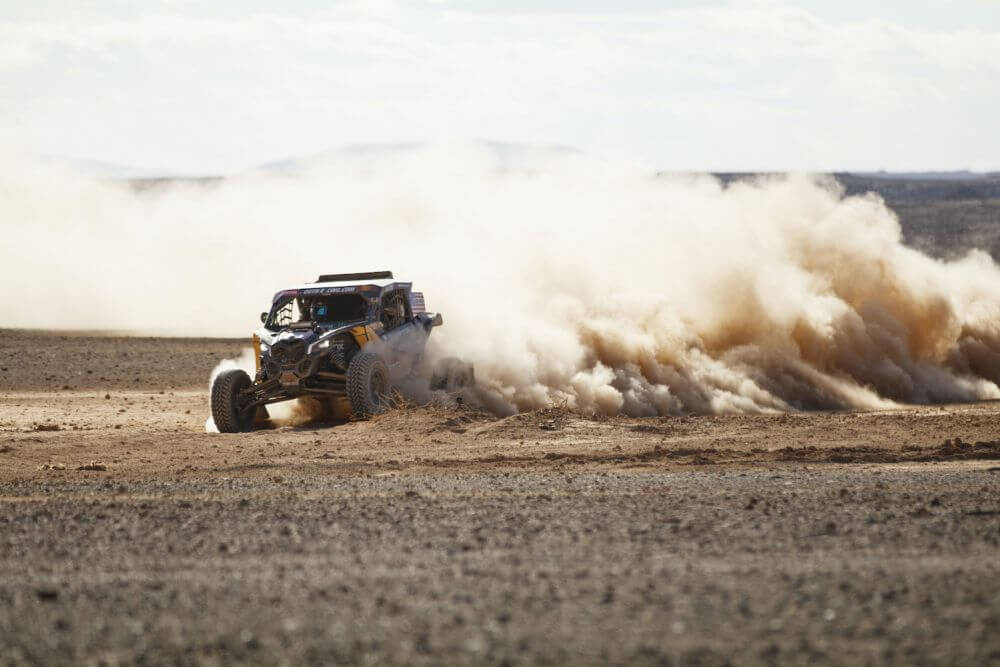 After the quick 2 Night stay in Neom the bivouac packed up and got back on the road in the morning. It’s always a crazy site waking up in the morning and half of the camp is empty from the bike teams taking off early.

Casey and Sean had a 123km, 2 hour liaison to get to the start of the special. They started 50th vehicle on road this stage and 3rd SSV. The special Stage was 453km long and actually passed by the Nabatean temples. These temples were carved into large stones that sit out in the middle of the desert and look alien made. There are over 100 of these temples scattered around the Madâin Sâlih area in the northern reaches of Saudi Arabia.

“On the agenda this day you will find equal parts sandy stretches and gravel sections, mostly on tracks. However, do not confuse speed with precipitation, as the arduous navigation will require some clear choices. History buffs will be keen to get their cameras out as they pass close to Nabatean temples.” – Dakar

Off the start it was similar to the stage before with the top 10 all within 2 minutes of each other on corrected time. The stage would be a difficult one with a lot of sharp rocks. Around the midway mark Casey would get a flat tire and with not wanting to risk too much down time would play it more conservative for the rest of the stage. Flat tires would play a major role on today’s special. Francisco Lopez Contrado who started only 15 seconds behind Casey on the overall, at one point looked like he would have a big day and then ended up getting two flats and would have him finish in 6th, one spot ahead of Casey who finished 7th on the day. With a long way to go it’s all about staying in the lead pack and not having any massive issues.

“Today’s stage was difficult, not navigation, just rocks. There’s just a lot of sharp rocks out there and a lot places to lose tires. We pushed hard in the beginning and everything was going really well and I got a puncture in a nasty rock section. From there I just cruised, I think we lost a total of 12 minutes today, it’s a little devastating but we’re still 3rd overall which is what we’re going for. I’m still learning rally and I just want to win every day and that’s obviously not going to happen. Overall the car is in great condition and we’re getting closer to the sand dunes and that’s where I feel like I am going to be able to perform even better.” – Casey Currie

Stage 5 will be a shorter special and will test the drivers with massive dunes with scattered desert grass that will keep racers on their toes.

Story and photos courtesy of CaseyCurrie.com and MCH Photo