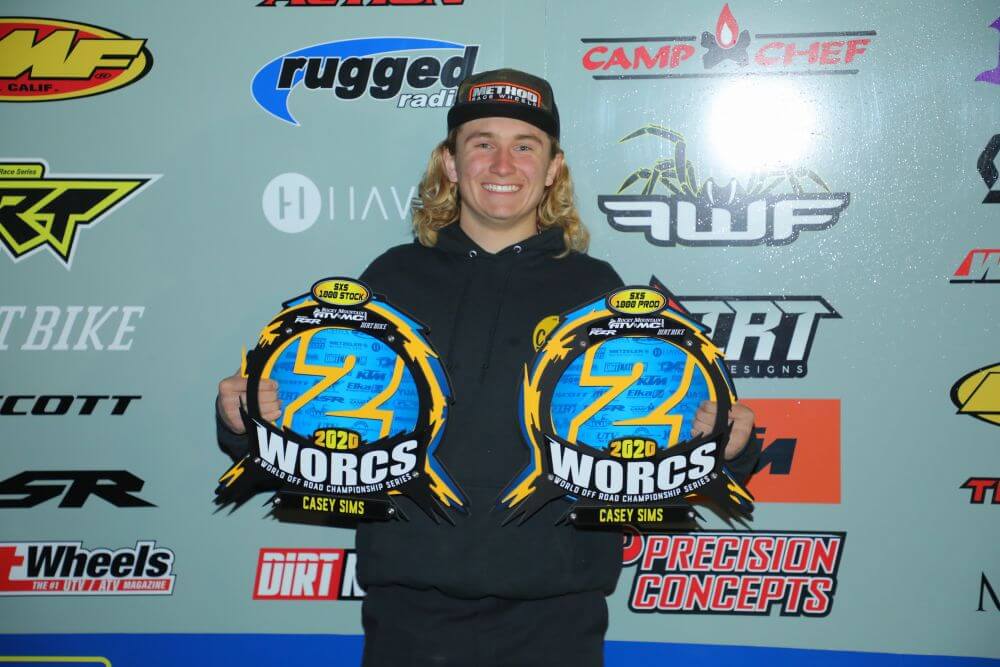 November 22, 2020
Primm, NV- The 2020 WORCS season is complete, and what a season it was! This year was full of ups and downs, and I faced many challenges in racing, but I kept pushing forward and ended up putting BOTH of my RS1’s on the box overall this season!

After qualifying, I ran both cars through tech and then worked on a few minor things to get them dialed for race day. On Saturday, I got up early to radio for one of the RZR170 racers I coached this season. He ran a great race! Then, I headed back to my pit to get ready for my first race. I lined up in the 3rd position and got
ready to go! We entered the Lucas Oil track and made one lap behind the pace motorcycle. As we rounded the last turn, the motorcycle pulled off, the green flag flew, and we took off! I hit the gas down the straight away and rounded the first turn. I raced as fast as I could around the track chasing down P2.

After 6 laps, I had maintained my 3rd place spot. The yellow flag flew slowing us all down and the pace motorcycle entered the track again. We followed closely behind for one lap, and then the motorcycle pulled off and we took off again! The next 6 laps flew by and I gave it everything I had to catch the
leaders, but in the end, I finished the race in 3rd place. I headed back to my pit and grabbed some water before heading back to the line in my Stock car. I lined up in P3 again and we headed back onto the Lucas Oil track. After following the pace motorcycle for one lap, the flag flew and we took off! I was passed in the first lap setting me back to P4, but I stayed on the car in front of me, doing everything I could to make a pass. After 6 laps, the yellow flag was out and the
pace motorcycle entered the track, bunching us back up again. As we rounded the last turn, I got ready to
go.

The flag flew and we took off! I did everything I could to catch and pass P3, but in the end after 6 more laps, I couldn’t get it done. I finished the race in 4th place. We headed back to my pit to get the cars washed and prepped for the final round of races on Sunday. I was up early again on Sunday morning to radio for one of the RZR170 racers. He finished his race in 3rd place which was enough to win his first overall championship! I was stoked and super proud of him!

My 1000 Production class race was next and I was lined up on row one, ready to go. The green flag flew and we took off! I was bunched in the middle of the pack off of the start and going into the first turn, I was in P5. I quickly made a pass moving me into P4. Then I focused on chasing down the leaders.
During lap 2 heading down a straightaway, I was able to make another pass moving me into P3. I ran in P3 for two laps pushing myself and my car. Then during lap 4 towards the back end of the course, I passed another car moving me into P2. I knew I didn’t have much time, but I was going to give it my all to catch the leader. I raced in and out of the timing chute to head out for one more lap. I made up some time during the last lap, but it wasn’t enough to catch the leader. I crossed the finish line in 2nd place!

I headed back to my pit to get ready for my 1000 Stock class race. After grabbing some water, I climbed into my stock car and went to the line. I was in row one and as the flagger’s arm waived down the line, I got ready. The flag flew and we took off! I was in P4 as we rounded the first turn and headed out onto the course. During the first lap, I was able to make a pass moving me into P3. I held my position, but during lap 3, I lost my front diff and had to continue in 2-wheel drive. It caused me to slow down a little, but I was still determined to catch the cars in front of me. I carried on and raced as fast as I could. In the end I crossed the finish line in P3, but finished the race in 4th place on corrected time.

Thanks so much to all of these amazing companies and people that support my program: Polaris RZR, Benchmark Performance, Candle Motorsports, Method Race Wheels, GBC Motorsports, Crow Enterprizes, Elka Suspension, Super ATV, Roll Design, Energy Coil Racing, Factory UTV, Baja Designs, Gates G-Force, PRP Seats, Rugged Radios, Maxima Racing Oils, Bikeman Performance, Tireblocks, JAMAR Performance, Race Team Sites, Crown Performance Products, Got Sand Performance, Oceanside Driveline, HOK9, Vision Canopy, Perrault Motorsports, Dirt Rider Designs, and my parents who make this possible for me! Thanks to WORCS for putting on the series and Harlen Foley for the amazing pictures! You can check out the Sims188 Racing team on Instagram @csims188, on Facebook
at www.facebook.com/csims188/, or on my website at www.sims188racing.com.

No time to lose for Red Bull KTM Factory Racing – 2021 Dakar Rally is just one month away! Previous post
Who the hell is Tony Pellegrino? Next post