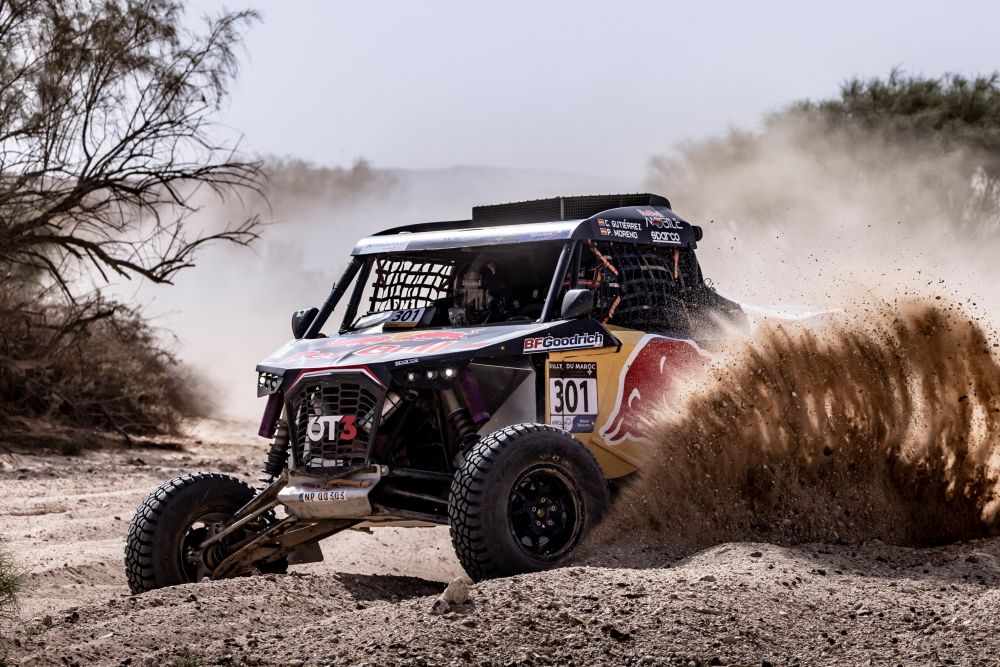 October 19, 2022
The Red Bull Off-Road Junior Team are in Spain this week gunning for victory at the Andalucia Rally and also top spot in the inaugural World Rally-Raid Championship. A race win at the previous round of the championship has the young squad’s confidence sky high as they tackle the series finale, contested over 1,175 km of dusty tracks around Seville.

Spanish native Cristina Gutiérrez has finished on the podium at all three W2RC rounds so far this year. That level of consistency has put her OT3 second in the overall T3 rankings, just 28 points behind category leader Chaleco López.

With 30 points available for the win in Andalucia, plus an additional five points on offer per stage win, Gutiérrez knows the door to a series win remains open. Giving the Spaniard extra belief as she gets into gear alongside co-driver Pablo Moreno is the fact that she won the Andalucia Rally last year.

“I can’t wait to race in Andalucia! The fact that the last round of the championship is held in my country is something very special.” – Cristina Gutiérrez

Just 10 points back from Gutiérrez in the overall W2RC rankings is fellow Red Bull Off-Road Junior Team racer Seth Quintero. The 20-year-old’s astonishing victory at the Rallye du Maroc earlier this month catapulted him right back into the championship conversation.

Quintero’s historic 12 stage wins at the Dakar in January proved that the young American is capable of extraordinary feats. Now he and co-driver Dennis Zenz arrive in Spain looking to leapfrog both Gutiérrez and López to pull off yet another scarcely believable achievement.

“We just came off of a win a few weeks ago in Morocco and that was our first win at a big rally. Now we’re looking to carry that momentum into Andalucia.”– Seth Quintero

Guillaume De Mevius has picked up at least one stage win at every round of the W2RC and is looking to keep that run going in Andalucia. While stage wins have been scored at the Dakar, Abu Dhabi Desert Challenge and Rallye du Maroc, it’s an overall podium position for De Mevius and co-driver François Cazalet that would represent ideal preparation for their trip to Saudi Arabia next January.

It’s been a busy month for Mitch Guthrie Jr. ahead of racing the Andalucia Rally. Not only did he secure a fifth place finish at Rallye du Maroc and win the first-ever California 300 in the same week, the American driver will now race the brand-new MT3 developed by the innovative French-based development company MCE-5. The MT3 racer benefits from already complying with FIA 2023 regulations.

Guthrie Jr. and new co-driver Kellon Walch will debut the MT3 and its combo of 32-inch BFG KDR3 tyres and bespoke KMC wheels in the T3 Open Class in Andalusia. Also racing in this competitive category in Spain are 14-time Dakar winner Stéphane Peterhansel and co-driver Edouard Boulanger, looking to sharpen their own 2023 preparations in an X-Raid Yamaha T3 with no other aim than giving it everything they have at the Andalucia Rally.

“I’m really excited to be racing the new MT3 for the first time in Andalucia. I’ve been really impressed by the car, the development, the engineering quality and everything that has been put into making it.” – Mitch Guthrie Jr.

The Andalucia Rally got going today with a prologue stage close to Seville. Now comes 1,175 kilometres against the clock spread over four stages to decide not only the winners of this race, but also the first-ever World Rally-Raid Championship.

Cristina Gutiérrez: “I can’t wait to race in Andalucia! The fact that the last round of the championship is held in my country is something very special. I know that it’s difficult to claim the title, but no one will tell us that we haven’t fought until the end. This is my favourite race and I always run with a special motivation. I hope the fans enjoy it as much as we do.”

Seth Quintero: “We just came off of a win a few weeks ago in Morocco and that was our first win at a big rally. We’ve got plenty of stage wins before but not an overall win. I’m happy to finally to get that out of the way and now we’re looking to carry that momentum into Andalucia. This rally is by far one of my favourite races, the atmosphere and the course really fit my driving style. It’s a new layout this year so I’m excited to see that. We’re third in the championship, 10 points from second and 48 points from first. First seems out of reach but you never know what can happen, we’ll just be putting our heads down and doing our best no matter what. Second is definitely in reach and we’re going to do our best to try and get that. Overall we’re looking to have a good time so we can finish out the year strong and then really start getting ready for Dakar.”

Mitch Guthrie Jr.: “I’m really excited to be racing the new MT3 for the first time in Andalucia. I’ve been really impressed by the car, the development, the engineering quality and everything that has been put into making it. The testing in Morocco went great, a lot of improvements were made. Now it’s time to race in Andalucia and see where that takes us. I have a lot of confidence in the team so I think it’s going to go really well. Also having Kellon Walch step in as co-driver is really exciting for me. He’s someone that has a lot of success in the rally-raid scene and I think we can be a really good team together. It feels like a new start with a new car and co-driver, we’re ready to go!”