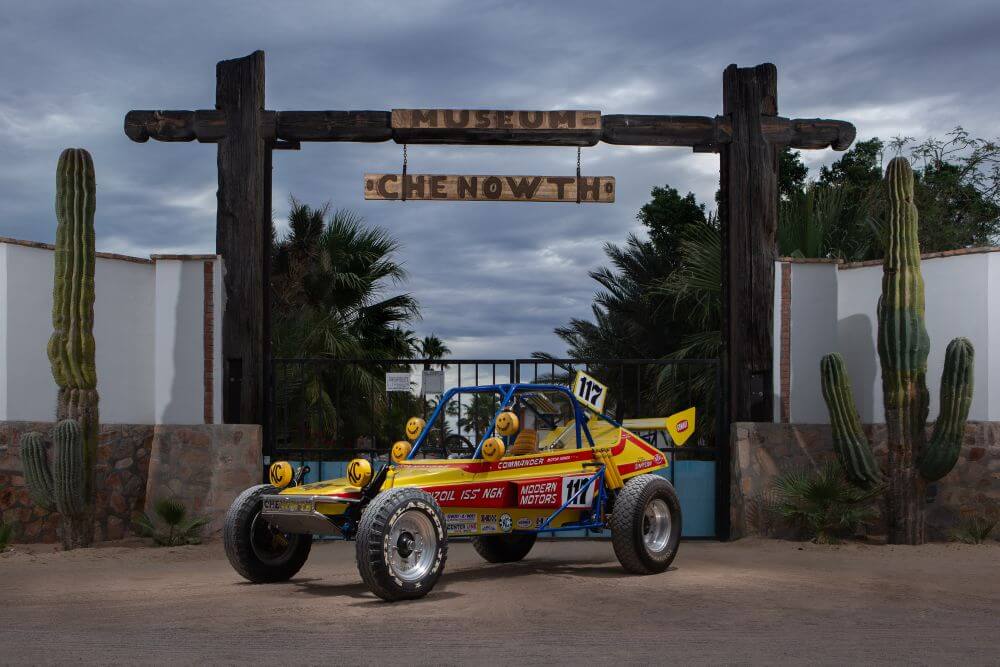 In 2019, Lynn Chenowth was inducted into the Off-Road Hall of Fame for pioneering the first mass-produced off-road chassis which included some of the best suspension designs of that era. Now retired, Lynn came up with the idea of creating a boutique-style hotel including a museum and bar that features some of the biggest successes of Chenowth’s history. Basically, a living timeline of the history of Chenowth. The Chenowth Legacy Lodge sits on the warm beaches of the Sea of Cortez in Percebú. just 30 minutes south of San Felipe in Baja California, Mexico.

The hotel is currently under construction and about 60% complete and museum is complete and open. With over 10 individual cars, some of which are still raced today in special events like NORRA, it is a stunning visual celebration of one of the greatest eras of off-road racing. You can go see the vehicles used by legendary drivers such as Roger Mears or Ivan Stewart and Chenowth built military vehicles and dune buggies.

Our first photo at the entrance of the Lodge features the original single-seat buggy that Ivan Stewart drove solo and won his first Baja 1000 in 1976, earning his nickname “Ironman” and making this vehicle one of the most important in the entire collection. Ivan Stewart is one of my favorite drivers of all time.

Walking inside the compound, we reached the main gate of the museum. I used that as the next background for another legendary vehicle, The Red Dog Buggy which was driven by pioneering off-road racer driver, Corky McMillin. A Chenowth 2000 series, which was a favorite among other legendary drivers like Roger Mears, one of its features is a unique 5-link rear suspension system that was way ahead of its time.

And then we go inside…

The first thing you notice inside is the “Mears corner”, a collection of an endless number of trophies and awards earned by Roger Mears. The unique Chenowth suspension was a key to Mears racing success. The Chenowth Magnum short-course cars dominated short course racing around the country for a decade, including the Mickey Thompson stadium series also featuring the 5-link rear suspension perfected in desert racing.

During that race, we had the chance to photography these vehicles which although they are not part of the collection of the lodge they are still a important part of the rich Chenowth history.

Coming back to the Museum, Chenowth had some military vehicles that on display as well.

Everywhere you lay your eyes, the place is full of memorabilia photos, posters, hats, trophies and old race maps. The bar upstairs is the perfect place to talk off-road racing with friends while having a couple of drinks overlooking the beautiful Sea of Cortez.

We look forward to seeing the place in its full glory next year! We want to thank Lynn Chenowth and Jennifer Coleman for such awesome hospitality during our visit.

For more info on the Chenowth Legacy Lodge click on the link below:

Offroad heavyweights head to the desert for a final Dakar Rally tune up Previous post
Nasser Al-Attiyah blasts over the dunes, wins Hail Baja 1 Next post