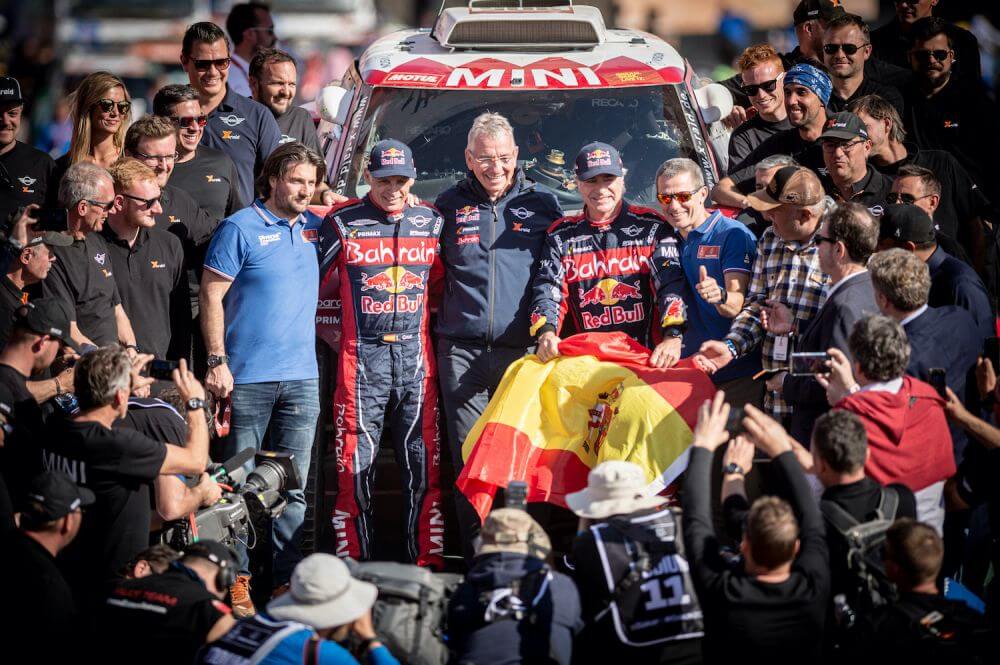 The offroad odyssey of over 7,500 kilometres that was the 2020 Dakar Rally in Saudi Arabia has crossed the finish line. Competitors across five categories were pushed to the limit over 12 stages on unforgiving terrain. It’s not just the winners that are celebrating tonight, everybody making it to the end of the Dakar is a motorsports hero.

In the car race a third Dakar title has been secured by Carlos Sainz (ESP) and his co-driver Lucas Cruz (ESP). The champions put their Mini Buggy in pole position on Stage 3 and stayed on top of the general classification all the way to Qiddiya.

“It makes the victory even nicer when the battle is so tough. On top of that I win in a third different car, I’m very proud of that.” – Carlos Sainz

El Matador Sainz was pushed all the way by Nasser Al-Attiyah (QAT) and Stéphane Peterhansel (FRA). The Spanish champion needed to call on all his offroad experience and expertise to keep the challengers at bay. At the conclusion of Stage 12, Al-Attiyah was in second overall and Peterhansel third. This trio now have a grand total of 19 Dakar wins between them.

“The fight with Carlos (Sainz) and Stéphane (Peterhansel) has been tough. There were three drivers at the front of the race giving it everything to win. Well done to both Carlos and Stéphane because we were all involved in a great race.” – Nasser Al-Attiyah

Also equipping himself well on the Dakar’s debut in the Middle East was Giniel De Villiers (ZAF). A fifth place finish for the South African gives him his 13th Top 5 at the Dakar. Meanwhile, Kuba Przygonski (POL) battled back from a tough first week to show impressive speed in the closing stages and rose to a Top 20 finish.

“This was not an easy Dakar, we had some technical issues. However, in the end our speed was quite good. Now we think about the next Dakar and one year of hard preparation.” – Kuba Przygonski

Following nine Dakar truck wins in 11 years while the rally was hosted in South America, Team Kamaz Master have continued their winning record in Saudi Arabia. Andrey Karginov (RUS) won his second Dakar title and the nearest non-Kamaz truck to him was more than two hours back in the general classification.

“It was important for us to confirm the first position of Kamaz in the truck category of the Dakar and to show the advantage of our vehicles in this new region for the rally.” – Andrey Karginov

“Congratulations to the crew of Andrey Karginov. We are grateful to all the fans and partners of our team for their support.” – Anton Shibalov

Building his own legacy at the Dakar is Ignacio Casale (CHI) who claimed his third quad bike title. Casale put together an unassailable lead in the opening stages, so when he did suffer a navigation error on Stage 10 he was able to stay in top spot.

“We worked hard all year long with the mechanics and now I can celebrate this win. Thanks a lot and Viva Chile!” – Ignacio Casale

History was made in the side-by-side race when Cyril Despres (FRA) – alongside co-driver Mike Horn (SUI) – became the first Dakar competitor to win stages in three different categories (bike, car and SxS). Despres’s result was one of six stage wins collected by Red Bull Off-Road Team USA as they debuted their OT3 by Overdrive vehicle at the Dakar. Despres and Horn coached and mentored young drivers Mitch Guthrie Jr. (USA) and Blade Hildebrand (USA) throughout the rally in Saudi Arabia.

“There’s still a lot work to go into this program to get it to where we want it to be, but there were lots of positive steps at this Dakar.” – Blade Hildebrand
Chaleco Lopez (CHI) arrived at the 2020 Dakar as the defending SxS champion and dug deep to come away with a podium finish at this latest edition of the world’s toughest rally.

“We had a huge problem the day before yesterday, so a podium place isn’t that bad after all. The first edition in Saudi Arabia was interesting, I’m sure the rally will be even better next year.” – Chaleco Lopez

The 2020 Dakar Rally bike race will be remembered for the fatal crash suffered by Paulo Gonçalves (POR). Gonçalves was a much loved and respected rider within the bivouac and his passing on Stage 7 led to Stage 8 being cancelled for the bikes and quads in honour of the former Dakar runner-up.

The bike race in Saudi Arabia was won by Ricky Brabec (USA) on a Honda, the first time in 19 years that the fastest Dakar rider had not been on a KTM. Brabec was followed home in second place by Pablo Quintanilla (CHI) on a Husqvarna.

“It’s not the result we came for but with the two weeks we’ve had I’m quite happy to keep my podium streak going. Now we’re going to regroup ahead of Dakar 2021. I’ll be back and looking to get the #1 plate again.” – Toby Price

“It’s been a tough Dakar and there’s been some really bad crashes. I’m pleased to get over the line safely.” – Matthias Walkner

“I’ve started 10 Dakars and I’ve finished all 10. This is something that is really difficult and it’s an achievement I’m very proud of.” – Laia Sanz
Congratulations to all who have conquered the first ever Dakar in Saudi Arabia and good luck to anyone signing up for the world’s toughest rally in 2021. We’ll see you there.