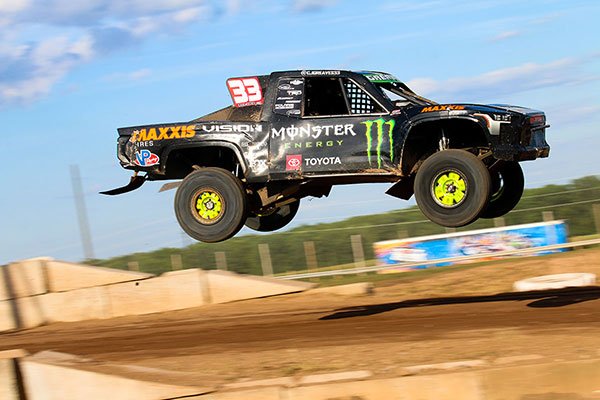 Lena, WI (July 31, 2022)–The weather was absolutely beautiful but the racing was gnarly as the Champ Off Road Series hit Dirt City in Lena, WI, for rounds 7 and 8. A record crowd showed up to witness off-road racing’s finest mix it up at the tight technical track located about 25 miles North of Green Bay. The Greaves Duo had some great qualifying runs and were ready to put on a show for the hillside covered with race fans. CJ and his team continue to dial-in his Monster Energy Polaris Pro Stock SXS UTV and pulled off a very close second place on Saturday and took a decisive win on Sunday going basically wire-to-wire up front. It looked as though he would win on Saturday in the Pro Turbo SXS class but he pulled off with mechanical problems. He was in the lead at the time with only 51 seconds remaining in the race. His bad luck continued on Sunday and had trouble from the very start of the race. In the Pro4 class, CJ was battling for the 2nd place spot on Saturday when Cole Maner pushed him into the K-rail, knocking him out of contention. Johnny overcame some early race contact to claim the 3rd spot on the podium. Sunday, CJ started on the front row and was strong the entire race, leading until the last 2 turns, only to be overtaken by LeDuc who most thought should have been a lap down. John led some of the first half of the race but was unable to make it to the podium.

Pro Stock SXS
Saturday: CJ Greaves qualified his Monster Energy Maxxis Tire clad Polaris RZR first but lined up 7th due to the inversion draw. When the late afternoon race got underway in front of a capacity crowd, CJ was able to quickly move into the 3rd position by the 3rd corner. By lap 2, he had passed Joe Dresel and began to pressure the UTV of Dallas Nord for the lead. Nord biked his car which handed the lead over to CJ just ahead of the competition caution. Brock Heger also passed Nord to take over 2nd setting up the familiar battle between the top 2 points leaders for the second half of the race.

CJ held the lead on the restart. On the next lap, however, Heger took the inside line away from CJ and grabbed the lead. On the final lap, a red flag stopped the race due to fire in the machine of Letourneau. The restart was green/white/checkered but again, just before the leaders could get to the checkered flag, another caution stopped the race but gave CJ anther opportunity to find a way around Heger. On the restart, CJ and Heger went wheel to wheel. Heger was able to hold on to take the win with CJ less than half a second behind him.

Sunday: The field of 14 cars took the green flag and hit the tabletop jump in front of a packed Dirt City house on Sunday. CJ started on row 4 for the 2×2 rolling start. By the 3rd corner, he took the lead and checked out with Heger nearly 5 seconds behind him all the way to the competition caution.

On the restart, the top 2 cars pulled away from the field with CJ’s Polaris RZR out front. On the next lap, Heger took the lead away only to have CJ out break him in the next turn to regain the lead. The next lap saw the exact same thing happened again. This time when CJ got the lead, he held it through to the end of the race by more than 10 car lengths over Heger.

Pro Turbo SXS
Saturday: A huge field of 20 Turbo Side-by-Side UTV’s lined up for Saturday race at Dirt City. From row 2, CJ Greaves quickly went to the 2nd place spot by turn 2. A full course caution reset the field after Kyle Chaney tangled with the K-rail. On the restart it was Hemis Kelsey in the lead followed by CJ and Adrian Cenni. Cenni was beginning to pressure CJ for the 2nd place spot when he was involved in contact with another car. Meanwhile, CJ was applying some pressure of his own. Kelsey went wide in one of the many Dirt City turns and CJ took advantage, taking a quick inside move for the lead just ahead of the competition caution.

CJ’s Monster Energy Maxxis Tire Vision Wheel Polaris RZR led the field to the green flag for the restart of the race. With every lap he stretched his lead but with less than a minute left in the race, his UTV shutdown due to some overheating. He limped around for the remainder of the race.

Sunday: CJ’s Turbo troubles continued on Sunday. When the green flag flew he was not in the group of 25 cars that hit turn one. He was finally able to get his machine fired but entered the race several laps down.

Pro-4
Saturday: The Greaves Duo of John and CJ Greaves started on row 3 and 4 respectfully of the 9-truck field. The Pro-4 class, known for its bumping and grinding, proved no different on the tight, technical Dirt City track. Halfway through the first lap, Adrian Cenni spunout, collecting Henderson and the number 22 of Johnny Greaves. LeDuc and CJ avoided the crash and easily cleared the pileup to land in the 4th and 5th position. Johnny and Cenni were able to get going again. Cole Mamer was leading and Scotty Warren was in second, but Warren hit one of the large tractor tires and loss a couple positions. CJ made his way up to 4th at the competition caution.

On the restart, Mamer went wide in turn 2 allowing LeDuc to take the lead. The younger Greaves, now in 3rd, took the outside lane of the split track to setup for the move on Mamer in the next turn. The two went side-by-side at the exit of the turn but Mamer tried to slide in front of CJ. He made contact and pushed CJ into the k-rail. CJ was finally able to re-fire his truck but well back from the field.

While CJ was mixing it up with Mamer, John and Henderson were battling for 3rd. The two went door-to-door and Johnny muscled ahead to take 3rd where he finished the race.

Sunday: CJ Greaves started on the front row in the weekend’s final race. He won the holeshot to turn one with LeDuc and Johnny Greaves in tow. LeDuc, driving like a wild man, hit the first of several contacts with the outside k-rail. In fact, on the 2nd lap, he hit the wall so hard that he straddled the k-rail and was stuck. Most, including the announcers, thought that he was a lap down as the field passed him a couple of times while the track crews got him off the wall. Much to everyone’s surprise, he re-fired his machine and rejoined the tail end of the field on the lead lap.

CJ held the lead with Johnny in 2nd through much of the 2nd half of the race. Johnny tangled with a tractor tire and a spinout took him out of contention while running in the top 3. It looked like CJ would cruse on to the win but a hard charging LeDuc had made his way into 2nd for a final lap showdown. CJ went wide against the wall with just a few turns to go allowing LeDuc to take the lead. CJ also hit a tire on the final turn, sending him into a 360 spin. He was able to continue and finished the race in 2nd.

In spite of the controversial win by LeDuc, CJ was able to hold on to the points lead by more than 30 points.

Next Race
The next race will be at Bark River International Raceway for the Island Resort & Casino Off-Road Rumble in the U.P. on August 13-14.