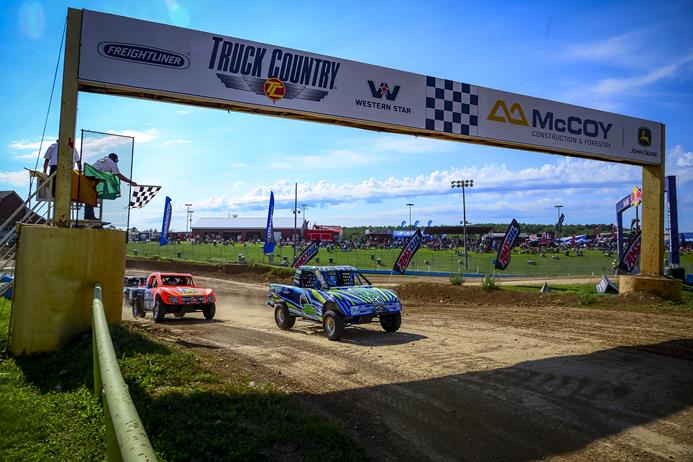 Crandon, Wis. ~ When AMSOIL Championship Off-Road heads to Crandon, Wis. for a Labor Day weekend full of short-course racing, one thing has always been certain: Champions will be crowned in Crandon.
Points racing for the Pro classes only takes place on Saturday, with Sunday turning into a non-points, World Championship spectacle. But on Friday, the focus is squarely on Sportsman racing, with those classes running the first of two full days of racing at the Big House.
With 12 Champ classes taking the starting line on Friday, including three under the lights, the championship race was going to be intense. No classes had been decided before Friday, and once the night was all wrapped-up, only one driver was able to secure his 2022 title.

PRO SPEC: The Pro Spec class was created by Championship Off Road prior to the 2021 season, with only one truck taking part (driven by Ryan Beat). But the spec-built truck class boasted four drivers during the 2022 campaign, and the racing has been tight, and fair all season long.
On Friday, with the bright Crandon lights shining down on them, it looked like Easton Sleaper was going to get his first win of the season. But Gray Leadbetter was on point during the second half of the race. She grabbed the lead with four laps remaining, getting around Sleaper, who put the truck on the bicycle and then stalled once all four wheels hit the ground.
It was Leadbetter’s fourth win of the year and put her into a tie with Visser for the overall points lead heading into Saturday’s final round. Visser finished second, ahead of Sleaper.

SUPER BUGGY: Coming into Crandon, only 14 points separated the top three in Super Buggy. Michael Meister held a 13 point advantage over Mark Steinhardt, with Billy Buth one point back in third.
Being under the big lights on Friday night, all three drivers showed up for the championship chases. All three put in spectacular runs, with Meister getting the early lead. But Meister used a second-half-surge to overtake the race leader. Meister would hold off both Steinhardt and Buth for his fourth win of the season.

SUPER STOCK TRUCK: Nick Byng was blazing fast early in the Super Stock truck race Friday night, but Scott Boulanger used a well-timed restart to take over the lead off the mid-race mandatory restart.
Boulanger kept his truck well in front of the huge, 27 truck field for his first win of the 2022 season. Defending champion Joe Maciosek moved into second shortly after the same restart and kept pace with the race leader before finishing second. Byng wouldn’t drop far, finishing the night in third.
Super Stock Truck points leader Kyle Cooper crossed the line in fourth and was able to increase his championship lead over Ben Holtger, who ended the night in seventh.

PRO AM SXS: It was a perfect day of racing for Matt Boerschinger as he kept his Pro AM SXS title hopes alive with a wire-to-wire win.
Boerschinger kept a hornets nest of several cars behind him after a green-white-checkered restart for his second win of the season. Tyler Remmereid and Jake Jorgenson put on immense pressure but slated into the final two podium spots.
Points leader Colin Kernz fell back to seventh late in the race, but he was able to finish one spot ahead of Bill Berger. Kernz leads Berger by five points heading into the final round with Boerschinger 39 points back in third. 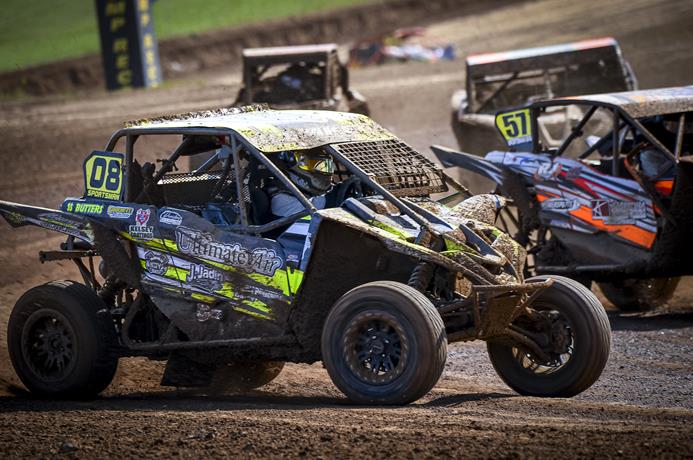 SPORTSMAN SXS: Ben Berger had the opportunity to clinch the Sportsman SXS title on Friday, but some unfortunate, last lap carnage that involved several cars put that on hold. Cody Jones led a restart on the final lap to finish with his fourth win of the season
Blemke was involved with the sprint to the finish as well, coming in second, just ahead of Riley Marquardt. Berger, meanwhile, was running fourth, but found himself in the middle of cars that spun and twisted into a big knot, pushing him down to 15th. That gives both Marquardt (2nd overall) and Blemke (3rd) another shot at the title on Saturday.
1600 SINGLE BUGGY: Beau Ambos owned the day, but it looks like John Fitzgerald will own the 2022 Single Buggy season championship.
Ambos managed the wet track to perfection on Friday, taking home his first win of the season over an extremely talented field. But he did have to hold off a hard charging Fitzgerald, who finished in second by just inches. Thomas Trelstad was able to make a last lap pass stick for third.
For Fitzgerald, he was able to increase his 27-point lead over Dylan Parsons thanks to his strong race and a tenth place finish by Parsons. Fitzgerald will enter Saturday with a 44-point lead.

SHORT COURSE KARTS: Carter Zahara needed a good run on Friday to get one step closer to the Short Court Kart championship. Zahara, who entered the day nine points down, waited until the last lap to make his move into the lead position. He was able to get around race leader Reed LeDuc with half a lap remaining and led a three-way sprint to the finish for his third win.
Wesley Vande Voort was also able to move up the ranks on the last lap after following Zahara around LeDuc for the runner-up spot.

1600 LIGHT BUGGY: The top three drivers in points put on a heck of a show in 1600 Light Buggy on Friday. Points leader Colin Schulz started third, behind Greg Stingle in second and early race leader Connor Schulz. Colin Schulz was patient early as Stingle and Connor went head-to-head for the lead. But on lap three, Colin took the lead and kept it over the final two laps for his fifth win of the season.
Connor Schulz was unable to keep the lead and dropped down to the runner-up spot. He would finish there, just one spot ahead of Stingle.
Colin now leads the points by 26 points over Stingle. Connor sits third, now 41 points back.
STOCK TRUCK: Cory Holtger entered Crandon with six wins over the first ten rounds. Make that seven and the 2022 Stock Truck title. Holtger grabbed the lead off the start and put the race in no doubt with a convincing win. He entered the weekend up 48 points and picked up two for leading the race at the halfway mark then another 50 for the win.
TJ Ewert tried to get his third win with a late push on Holtger, but Ewert had to settle for the runner-up spot. Diesel Shanak took over the final podium spot with two-laps to go.

170 SXS: The first race of the day went to the 170 SxS’s. Coming into the weekend, Wyatt Olson held one of the largest class leads in Champ Off Road at 34 points. On Friday, Ashton Dreher put in a heck of a race. Dreher took the lead over Olson and Kody Krantz on lap three and cruised to his third win of the season. Olson would pressure Krantz for the runner-up spot, but Krantz held him off at the line.
MOD KART: Michael Funk returned to Bark River after missing most of the season with a foot injury and took home a win. He heads into Crandon with the intention of playing the role of spoiler. He lived up to the moniker on Friday with a wire-to-wire win in Mod Kart.
Points leader Porter Inglese picked up two points on the field by finishing second. Chase Moeller kept him honest over the final laps before finishing third.
570 SXS: Ryker Remington and Ethan Dresel came into the day all knotted up in the 570 SXS standings.
Hudson Houle was on spoiler alert on Friday. Houle got a great start and was never challenged as he picked up his first win. Dylan Rohloff, who sits third overall, picked up a couple of points over Remington and Dresel with a second place finish. Rohloff was able to get around Remington with four laps to go for the runner-up spot. That pass also allowed Dresel to move up into fourth, one spot behind Remington’s final finishing position. That gives Remington a two point lead over Dresel for the title.

There is only one day of racing left on the 2022 Championship Off-Road schedule, with championships in all but one class still to decide. The Pro classes will race both Saturday and Sunday in Crandon, but only Saturday will count towards the points race, and will also include all 12 Sportsman classes. (Crandon will host its World Championship racing on Sunday). Every round of racing is aired via live stream exclusively on FloRacing.com.
About ISOC: AMSOIL Championship Off-Road and AMSOIL Championship Snocross are owned and operated by the International Series of Champions (ISOC) out of Albertville, Minn. For more information on its events and schedules, go to www.champoffroad.com.