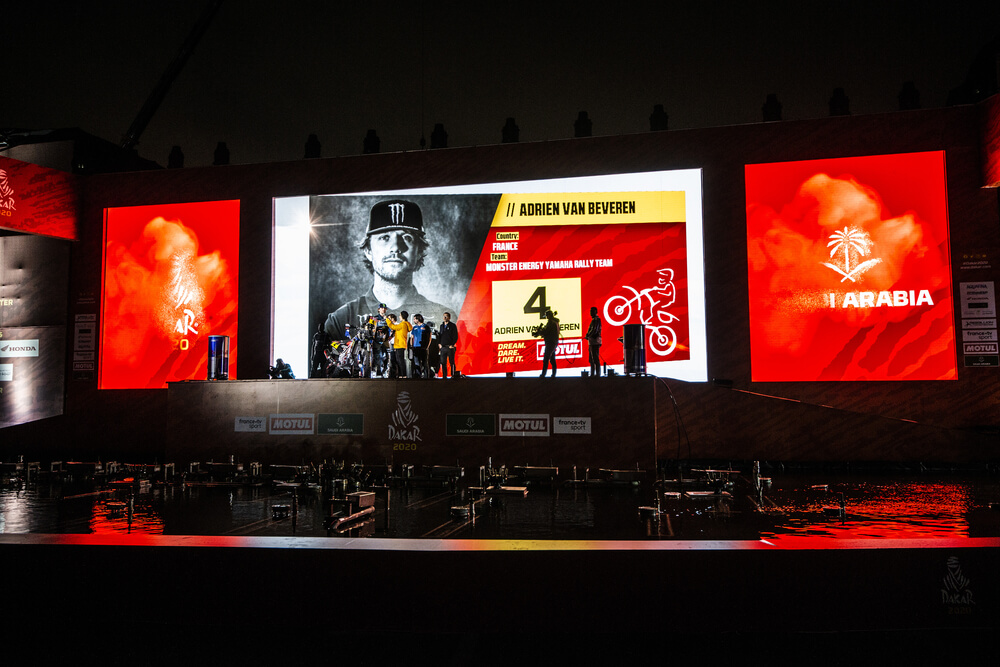 Simply making it to the start podium ceremony is already a victory in itself for many competitors who have spent time, energy and resources preparing for the Dakar as well as possible. For them, it was a well-deserved evening before getting down to business. The families of Jeddah, used to strolling on the Corniche, enjoyed a show that interspersed the presentation of competitors and their vehicles with musical sequences and aerial acrobatics against a colourful background articulated around a series of imposing containers. The big favourites burst onto the scene after nightfall to the beat of the band Canadien covering songs such as “Born To Be Wild”, “You Can Leave Your Hat On” or “Baby You Can Drive My Car”. Local star Yazeed Al-Rajhi unsurprisingly received the most thunderous applause. The Toyota driver called on his fans to come see him on the podium in Qiddiya in two weeks… where he hopes to be top dog for real this time round.

FROM BROTHER TO BROTHER IN THE METGE FAMILY

The starting list officially confirmed that Michael Metge will not be starting what would have been his eighth (and possibly last) Dakar due to a knee injury. Sherco decided to replace him with his own brother Adrien, who has been part of the team for several years but was poised to sit out the 2020 edition. It was a dramatic twist of fate for the younger of the two Metge brothers, who had to get ready for the rally with less than a week to spare: “Thank goodness we’re brothers and are the same clothing and boot size… I’m even wearing his jacket with ‘Michael’ printed on the back!” Moments before climbing onto the podium and bringing his bike back to the secure enclosure, the biker with race number 11 already felt comfortable enough in his new role to talk about his objectives: “Last year I was a bit frustrated because I finished 22nd riding with a broken scaphoid and after being slapped with a big penalty, although my pace was good enough to crack the top 10. I hope I can keep it up after training year-round. I still feel every bit as strong even though I haven’t raced a lot this season.” Meanwhile, a few thousand kilometres away, Michael is already his brother’s most fanatical supporter.

“WE NEED TO UNDERSTAND THIS RACE AGAIN” – NASSER AL-ATTIYAH

The three-time Dakar winner stands out as the big favourite after crushing the opposition throughout the season with co-driver Matthieu Baumel at his side. Seeing the Dakar set up shop in the Middle East has boosted his already sky-high confidence and motivation. “We are here to defend our title. We’ve won three times, but I know it will be hard with this new Dakar in the Middle East. The landscapes are really beautiful here, I know some regions well. I did two races here, in 2008 and 2011, and I won both. But it won’t be easy for anyone, we need to understand this race, which is completely new for everybody. It’s a mix of terrains that reminds me of Africa, Morocco and South America. I never really thought the Dakar would one day come to our region when I started the career, and now I’m just a thirty-minute flight from home! It would be a dream to win here.”

“YOU NEED TO BE READY FOR EVERYTHING, BUT YOU CAN’T ANTICIPATE EVERYTHING” – ADRIEN VAN BEVEREN

The Yamaha leader knows what it feels like to be knocked out of the race while in contention for overall victory in the closing stages of the Dakar two years in a row. However, the biker from northern France remains as upbeat as ever. “I used the last two years to gain as much positive experience as I could and get even better. I feel quite relaxed compared to last year, when I was animated by an insatiable thirst for revenge. The race will come down to navigation, which is something I enjoy. I’m ready to tap my potential to make it happen. I’ve got even better this year, suffered no injuries and feel calm and relaxed. I’ve got to believe in me and never give up. I learned to be patient. You can be ready to win the Dakar yet fail to win the Dakar. You need to be ready for everything, but you can’t anticipate everything.”

The race is on at the 2020 Dakar Rally in Saudi Arabia Previous post
Dakar 2020 – Day 2: The Pressure Cranks Up A Notch Next post