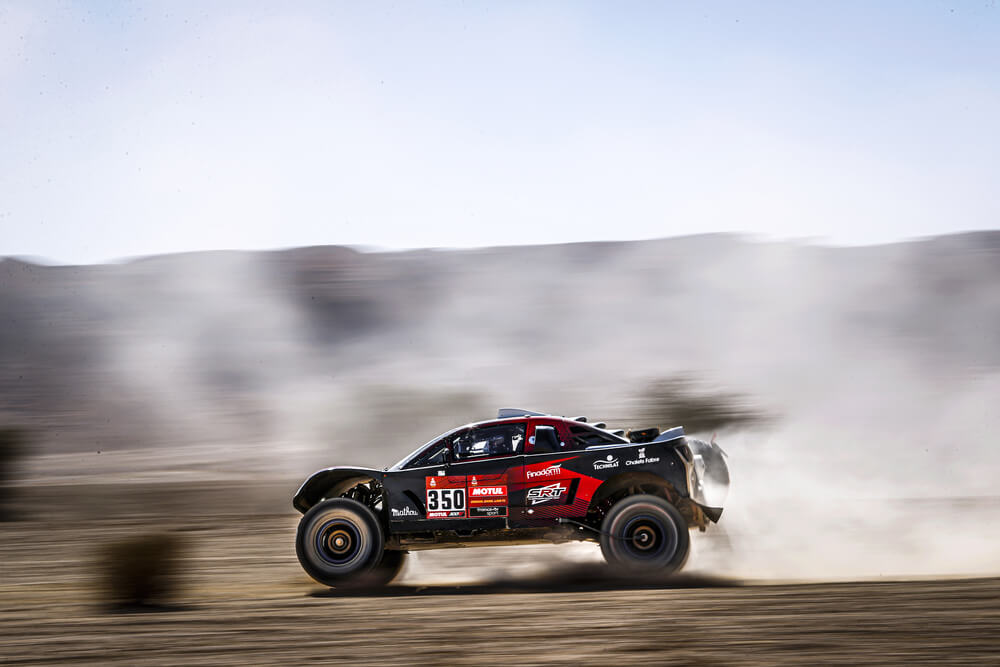 Pablo Quintanilla tried to push Ricky Brabec into making a mistake, but only managed to take a few minutes from the general standings leader. However, there is maximum pressure on Carlos Sainz, who starts the two days of the marathon stage with a lead of only 24 seconds over the title holder Nasser Al-Attiyah.

Pablo Quintanilla moved up a gear on the way to Haradh to finally become a stage winner in 2020 ahead of the title holder Toby Price, who was also forced to go on the attack to try and reduce the gap opened up so far by Ricky Brabec in the general standings. The Honda rider still sits calmly at the top of the pile, as does Ignacio Casale who is dominating the quad race and added a stage victory to his roll of honour, but merely by 3 seconds! An almost similarly small gap separated Stéphane Peterhansel from Nasser Al-Attiyah at the finishing line on stage 9, where the Frenchman triumphed by 15 seconds. The two men took advantage to regain time on Carlos Sainz, who is now in more danger than ever of losing the rally lead. Casey Currie gave himself some breathing space in the SSV race, completing a 100% American podium on the stage, behind the promising drivers Blade Hildebrand and Mitchell Guthrie, who are continuing the rally in the Dakar Experience formula. As for Andrey Karginov, he is no longer an emerging star in the category, but rather a seasoned performer who continues to stamp his mark on this Dakar in Saudi Arabia with a fourth consecutive stage victory.

Pablo Quintanilla woke up this morning in second place in the general standings, some way behind Ricky Brabec, and was therefore obliged to go on the attack if he wanted to continue to believe in his chances of seizing a triumph that has avoided him for so many years. Despite having a sore wrist over the last few days, the Chilean took full advantage of his starting position to put in a faultless performance and pick up his first stage victory since the start of the rally and the fourth in his career on the Dakar, enabling him to put pressure on the general standings leader and tackle the marathon stage full of confidence…

Ronan Chabot and his co-pilot Gilles Pillot experienced a dark day today. The business manager, among the best amateur drivers each year, was 15th in the general standings this morning but was a little too attack-minded on the first kilometres of the special, which led to him flipping his Toyota into a forward roll. The damage to Hilux No. 320 was considerable, meaning several long hours were required for repairs, only to cover several kilometres more of the special before grinding to a halt again. However, with only 5 premature exits before participating in his 21st Dakar Rally, Chabot is not the type of person to give up easily!

48th: this was the position of Fernando Alonso in the general standings on the evening of the second stage, after losing several hours repairing a broken wheel on his Toyota. Since then, he has followed up with one good performance after another to climb back up the general standings. On the evening of stage 9, the Spaniard has entered the top 10 of the general standings and is the leading rookie in the car category, 3 hours and 17 minutes behind his countryman Carlos Sainz. Motorsport fans were hoping for a duel between the two men and maybe they will see them battling it out for a stage victory in the last days of the rally.

Quote of the day

Ignacio Casale: “It was a good stage and I did a good time. My goal was to catch Vitse and not let him out of my sight, which is what I did. I helped him just a few kilometres back – he fell so I picked him up. I think he is okay and he should reach the finish soon. I found it difficult with the wind, it slowed me down quite a bit, but I didn’t have any real problems on the stage, no falls, no mechanical issues or navigation mistakes. We’re getting a little bit nearer to the end”.