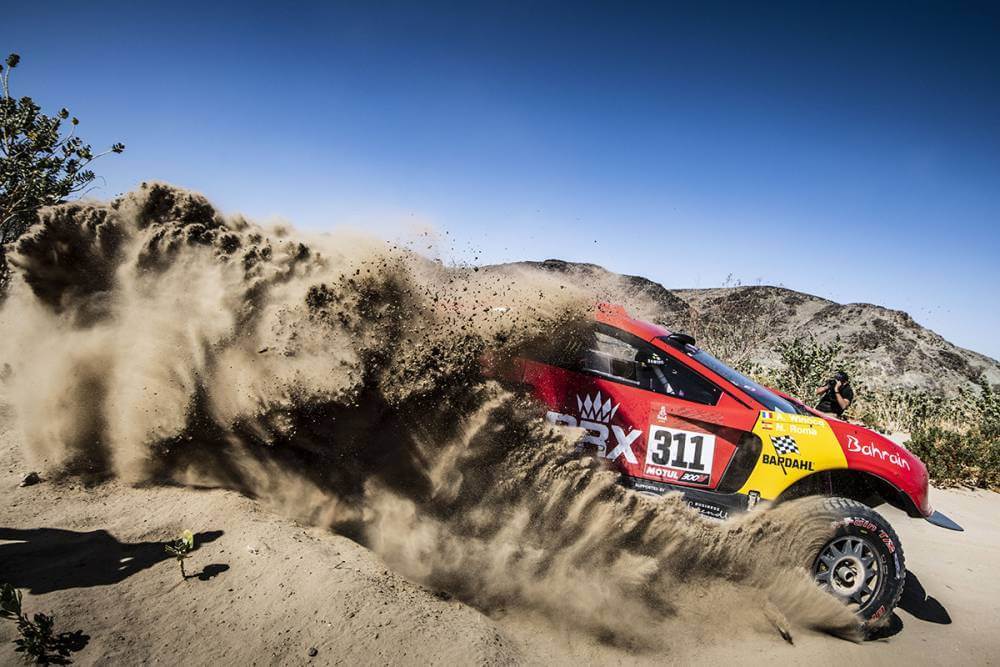 Price and Sainz rock the Dakar

The hectic pace of the first real special of the Dakar took a heavier toll on the competitors than its length. The hodgepodge of tracks in the first part of the course required a laser-like focus and got the best of riders such as Ricky Brabec. Next on the menu were tracks littered with rocks waiting to do a number on the tyres of any competitor who strayed from the right path, as Sébastien Loeb can attest following his bitter experience in the south of the country. Before reaching Bisha, the competitors who emerged unscathed from these early hazards caught a breather on the first sandy section of the race, which was much easier on their tyres… and on their nerves.

Outline
The first stage was a mixed bag for the defending champions. Ricky Brabec shipped 18 minutes to Toby Price after totally losing his bearings in the opening kilometres, while his predecessor as the winner of the race claimed his thirteenth career Dakar stage win. Meanwhile, Carlos Sainz nabbed victory in the car category, which saw outsiders Martin Prokop and Mathieu Serradori finish third and fourth, respectively. Cristina Gutiérrez and her T3 took the spoils in the lightweight vehicle category, signing one of those oh-so-rare female victories in the rally (see Performance of the day). In the truck category, 2020 champion lost over an hour and a half due to a mechanical, but this did not stop Kamaz from taking the reins of the general classification with one of his heirs, Dmitry Sotnikov. Finally, quad rider Alexandre Giroud was the only winner of the prologue who extended his victorious streak today.

Sébastien Loeb was probably hoping for more in his Dakar comeback. The man from Alsace started the first stage in a good position at the wheel of his BRX after finishing the prologue in tenth place. However, luck was not on his side in the opening stage. A series of three punctures ruined his pace, while a couple of navigational errors pushed him further down the classification. It was a calamitous stage for the French nine-time WRC champion, who is now almost 24 minutes adrift of leader Carlos Sainz in the general classification and has no choice but to go on the attack in the coming days.

Bikers of the world, unite! No fewer than eight countries were represented in the leading group of the first stage, including an American, an Argentinian, an Australian, an Austrian, a Brit, a Czech, a Frenchman and a Spaniard. Bikers from Botswana, Chile, Poland and Slovakia also cracked the top 20. All in all, 28 different nationalities featured on the start list of the Dakar motorbike race this year.

It seemed impossible. A fortnight ago, Cristina Gutiérrez had given up all hope of starting her third Dakar. However, just two weeks after RedBull Off Road Team USA called her up and put her behind the wheel of an OT3 light prototype, today she took the opening stage in the lightweight vehicle category. Most importantly, by beating former champion Reinaldo Varela, she has become the first female stage winner since German Jutta Kleinschmidt took her last triumph in 2005.

The makings of a Classic

Two Sunhill buggies from the 1980s are taking part in the regularity race. Marc Douton and Émilien Étienne claimed the inaugural stage.

Prologue & Podium: 2020 Was One for the History Books Previous post
Big Names Bounce Back in Second Stage of 2021 Dakar Rally; Peterhansel Takes Overall Lead Next post