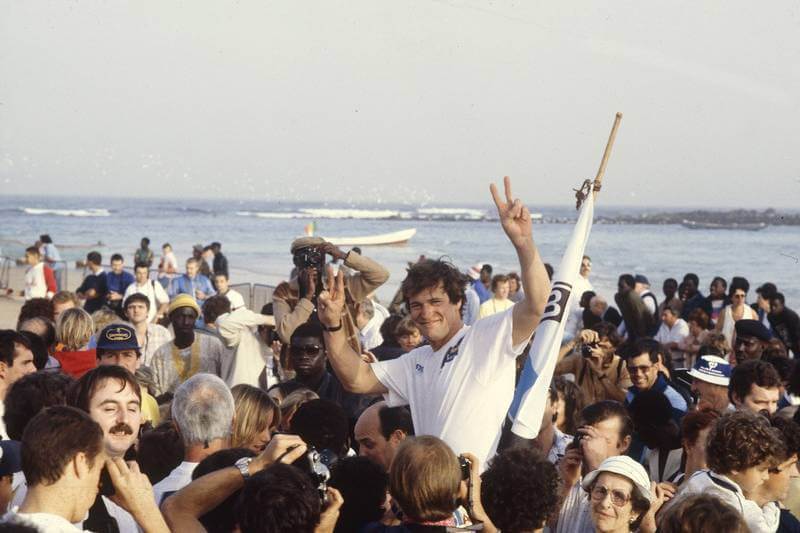 Dakar 2021: The African passes away

The recent updates on the health of Hubert Auriol foreshadowed the tragic news received by the organisers of the Dakar during stage 7. The former biker and driver has succumbed to a disease that sapped his strength but was unable to stop him from paying one last visit to the community he helped to build and galvanise, last year in Ha’il, on the occasion of the first edition of the rally in Saudi Arabia. Long before the start of this new era, back when the race was still in its infancy in Africa, he became one of the most iconic faces in the rally, going on to win the motorbike class in 1981 and 1983. The man from Addis Abeba soon came to be known as “The African”, but it was especially his epic duels with Cyril Neveu (particularly in 1987, when he lost after breaking both ankles in the penultimate stage) that established his legend and that of the Dakar. Following a switch to the car class, the 1992 edition saw Auriol become the first competitor to win in two different categories, a feat he achieved together with the navigator Philippe Monnet. After his final participation, when he finished as runner-up in 1994, he jumped behind the wheel of the whole event, staying at the helm of the Dakar until 2003.

The organisers of the Dakar, shocked and saddened by the news, would like to extend their sincere condolences to the friends and family of a man who was a guiding light throughout the history of the rally, with a special thought for his daughters Julie, Jenna and Leslie.

Outline
The stage win came as a poisoned gift to Ricky Brabec, who had already noted that every rider faced with the challenge of opening the way since the start of the rally had ended up floundering, including Toby Price and his own teammate Joan Barreda. The American clocked the fastest time in the special, but the big winner was Ignacio Cornejo, who seized the overall lead by a tiny margin over Toby Price and could even do better than Brabec in the role of pathfinder thanks to his great sense of navigation. In the quad category, Nicolás Cavigliasso was knocked out of the race by a mechanical, leaving Manuel Andújar in control of the general standings by more than 20 minutes over Alexandre Giroud and Giovanni Enrico. Yazeed Al-Rajhi achieved his goal of posting the fastest time in Sakakah, while the top two men in the general standings, Stéphane Peterhansel and Nasser Al-Attiyah, made sure not to push their cars too hard ahead of the second part of the marathon stage, in which the Qatari will benefit from starting in second place, six minutes behind his rival —a scenario tailored to his abilities. “Chaleco” López claimed his third stage win in the lightweight vehicle category, propelling him up to fourth place overall, but still 25 minutes behind the leader, Pole Aron Domżała. Dmitry Sotnikov added a fourth victory to this year’s bumper crop and increased his gap to teammate Anton Shibalov in the general standings to over 45 minutes.

Nicolás Cavigliasso made no secret of his ambitions in this year’s Dakar: “I’m here to win and take back my crown”. Following a cautious start in the prologue, the Argentinian got stronger as the race went on and got back to his winning ways in stage 3. The 2019 champion finished every stage since then on the podium… until today. A broken clutch less than 100 km before the line of the marathon stage, when he was running fifth, sent him scrambling to enlist the assistance of another competitor in a vain attempt to stay in contention. Seeing the writing on the wall, he eventually threw in the towel, relinquishing the lead to fellow Argentinian Manuel Andújar.

Yazeed Al-Rajhi’s latest stage win was six years in the making… and what better place than home? The Toyota driver’s most recent victory had come in Iquique, Chile, in 2015. Running second behind Stéphane Peterhansel shortly before the halfway point, the Saudi patiently looked for the tiniest chink in the Frenchman’s armour, which he found and exploited within the final 100 kilometres. No longer in contention for the overall victory after a gearbox problem in the opening week, Yazeed is now free to focus on chasing more stage wins, and only a fool would bet against him claiming another special before 2027.

José Ignacio Cornejo leads the general standings by one second over Toby Price after exactly 2,741.69 km of racing since the start of the prologue in Jeddah. The rest of the top 5 in the motorbike category is also very tight, with Kevin Benavides still within striking distance at 7′49″. To put it into perspective, the fifth-placed driver in the car category, “Nani” Roma, trails Stéphane Peterhansel by 1 h 59.

The makings of a Classic

The 23 vehicles in the category (including every single car and truck that started the race) came together for a family portrait on the occasion of the rest day in Ha’il.