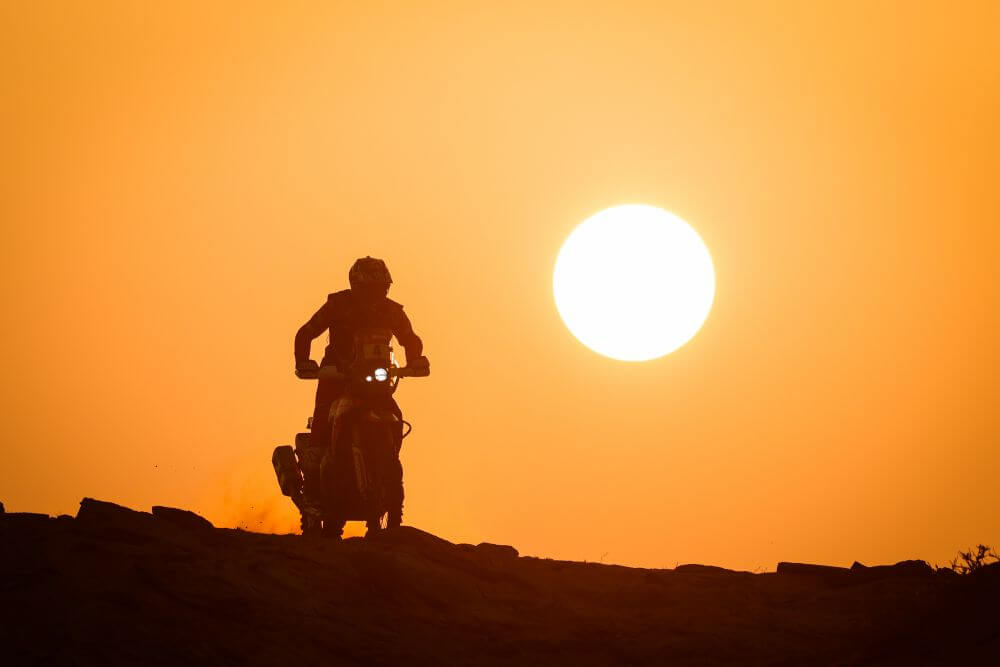 The ambitious “DakarFuture” energy transition plan has two main planks: the engines powering the cars and trucks in the race and the emissions related to the logistics of the organisation

By 2026, all the vehicles driven by Elite competitors in the car and truck categories of the Dakar will be subject to new ultra-low emission standards

A historical test run of a sustainable bivouac takes place here in NEOM. It is the first step in a transformational project that aims to create a bivouac 100% powered exclusively by renewable energy.

Since its inception in 1979, the Dakar has never shied away from exploring uncharted territories, from the deserts of Africa to the vast landscapes of South America and the arid expanses of the Middle East. Since the rubber first hit the road back in the 1980s, the Dakar has continued to innovate without sacrificing its sense of adventure, passion for exploration and determination to push the limits. In the course of 43 editions, the most noteworthy developments have led to a ban on GPS devices to emphasise the role of navigation —the life and soul of rally raids— as well as engine displacement limits. An unparalleled set of safety measures has been developed and expanded over the decades, leveraging the technological advances that have led to the use of Iritrack devices, SARSAT beacons, the Sentinel system and, starting this year, airbag vests for bikers. The Dakar is now demonstrating its pioneering spirit with a pledge to start building the future of rally raid without delay.

At a press conference held after stage 9 of the 2021 edition in NEOM, the organisers set out the Dakar’s vision for fostering green innovation in the world of rally raids. Redefining sustainability, NEOM’ s recent announcement of “THE LINE”, confirmed a city comprising carbon-positive urban developments powered by 100% clean energy, providing pollution-free, healthier and more sustainable environments for residents. Mixed-use communities will be built around nature, instead of over it.

The Dakar is launching the ambitious “DakarFuture” energy transition plan. This gradual energy transition has two main planks: the engines powering the cars and trucks in the race and the emissions related to the logistics of the organisation. The Dakar is determined to fully exploit its role as an open-air lab to stimulate, test and validate the technical advances made by the constructors in the knowledge that the race vehicles of today are the production vehicles of tomorrow.

These changes will be introduced at a gradual but steady pace:

– As soon as 2022, a specific “alternative energy” category will be created to put the focus on competitors racing in hybrid, electric or hydrogen-powered cars and trucks, as well as those who implement other emission-slashing technologies. The sporting rules will be adjusted to strike the right balance and make sure every project is competitive.

– In 2026, all elite competitors in the car and truck categories of the Dakar will be required to enter the race with vehicles that meet new ultra-low emission standards.

– After a few years, the development of these technologies is expected to enable amateur competitors to procure vehicles that meet the same standards in order to sign up for the Dakar from 2030. In 2030, both car and truck categories will fully be powered by alternative energy with zero emission.

Four ongoing projects chasing this ambitious goal have been presented:

– Sven Quandt, CEO of Q-Motorsport, the team running the cars for Audi Sport at the Dakar 2022 unveiled a project to develop a fully electric vehicle developed by Audi Sport.

– Cyril Despres and Mike Horn chose the same year to enter the race with their own hydrogen-powered car, Gen-Z.

– Finally, Christophe Gaussin, CEO of Gaussin Group, revealed the H2 Road Truck, a hydrogen-powered truck intended to be on the start line of the 2022 Dakar.

As important as it is, fostering the evolution of the vehicles in the Dakar Rally will not be the only leap forward in the use of clean energy sources. Building on its financial support for an anti-deforestation programme in the Amazon since 2009 (as part of its carbon offset scheme) and its rigorous approach to waste management, the Dakar is poised to undertake a wide-ranging transformation project with a view to creating a bivouac 100 % powered by renewable energy. A test run is being held in part of the bivouac of NEOM this year. For two days, the press room, the briefing room screen and the Competitor and Official areas will be powered by cutting-edge solar panel technology that combines energy production, storage and redistribution in one neat package. In the near future, it is the entire bivouac that will be concerned. Once again, the flame of innovation will burn bright at the Dakar to keep the adventure going.

« The many technical freedoms offered by the Dakar Rally provide a perfect test laboratory for us in this respect.» MARKUS DUESMANN Chairman of the Board of Management and Board of Management Member for Technical Development and Product Lines at AUDI AG.

« GAUSSIN recognises itself in values like overcoming and passionate commitment, that are reflected by the Dakar . Let’s be tomorrow’s adventurers » CRISTHOPHE GAUSSIN, C.E.O. of Gaussin Group.

« The presentation of the GCK e-Blast 1 is the first step towards what we believe to be the future of rally-raid: hydrogen vehicles » ERIC BOUDOT, C.E.O. of Green Corp Konnection

« My 21st Dakar, alongside my friend Mike Horn, with that project that might  revolutionize the world of motorsports. » CYRIL DESPRES.