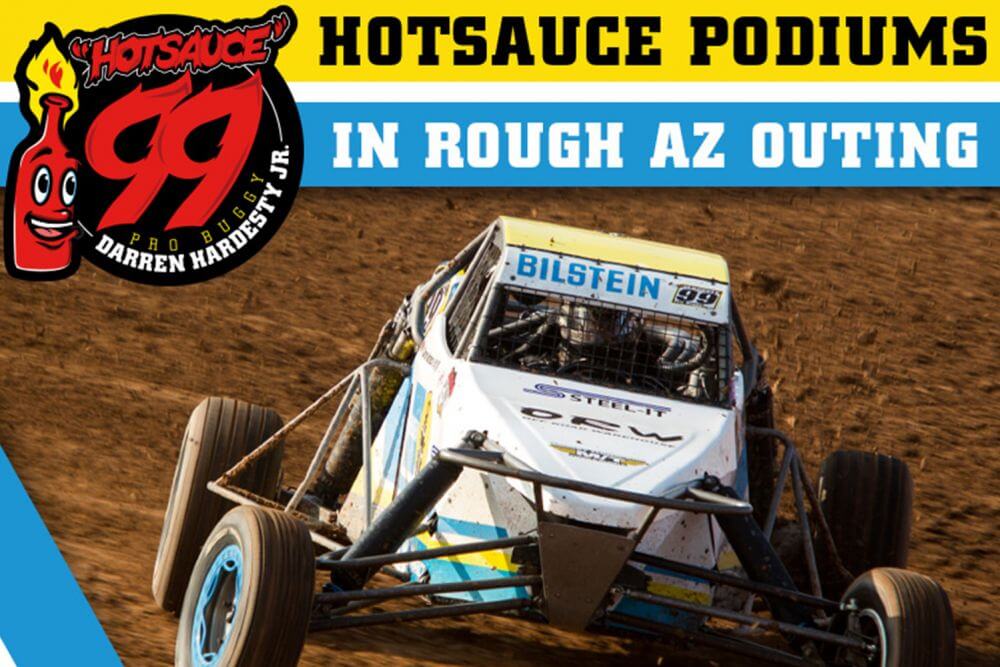 Darren Hardesty, a three-time Pro Buggy Champion, knows all about the up and downs involved in professional off-road racing. Hardesty raced the #99 Bilstein / Alumi Craft Pro Buggy to a 2nd place podium finish during Round 6 of the Lucas Oil Off Road Racing Series (LOORRS) but succumbed to troubles and rough racing in Rounds 7 & 8.

LOORRS officials implemented an all-new course design at Wild Horse Pass Motorsports Park in Chandler, Arizona. The new track stepped up overall speeds, bigger jumps, and saw increased passing zones. Everything was looking great at the beginning of the weekend but it quickly fell apart for “HotSauce” before it could ever really get started. “We were fastest during Practice 1 by 1.5 seconds,” Darren explained. “Then in the next practice we blew an engine and because of that we missed qualifying.”

This set up the #99 Bilstein Pro Buggy for a Round 6 rear row start. Darren, always one to overcome challenges, put his head down and made quick work to be in contention. “I started dead last and got an awesome start. By Lap 2, I was sitting in 4th or 5th. From there, I had a good battle going with Trey Gibbs and managed to drive my way up into 2nd place. It was a gnarly race. After the caution, I hammered down and brought home a podium finish. I want to thank everyone for making it happen and helping us get the car back on track.” stated Darren.

From here it all kind of rolled south. “Before the start of Round 7, I was lined up on the grid, parked on the front stretch, staging for the race. Things just started to shut down in the car. First the Parker pumper, then my radiator fans shortly after. The car startled to idle funny and just after that the Motec dash went out and the car died. We went to the hot pits and tried to fix it but the alternator was toast and I was not able to make the start of the race.”

Hardesty continued, “After this, we had high hopes for Sunday knowing how we did better starting in the back. Round 8 race got underway, and in between the first and second corners, another driver had a clear lapse in judgment and flipped my car. The blatant attempt to crash me out banged me up and the Alumi Craft pretty good. The car was mangled and twisted and for sure broken but amazingly still drivable.”

Darren went on, “Still in the race, I was able to make my way up into 5th place by the competition caution. On the re-start, another driver made a rookie mistake and hit me on the run-up to the step down causing me to almost roll again. I ended up getting a flat but lost the power steering too. That can likely be attributed to the impact of landing on the jump and the car previously being upside down. Despite all of this, the Alumi Craft kept moving and I limped it across the finish line in 9th.

Darren concluded, “This has been a tough 2020 season and with a heavy heart, I think the Hardesty Team will be out for the rest of it. I want to thank everyone who helped out this year. The Gibbs team, Watson’s team, Brister’s team, and there are a few others that went out of their way and lent a helping hand when we needed it the most. Also big thanks to Bilstein for making the car work so good, Mickey Thompson for their amazing support with their tires, and Off Road Warehouse for supporting us from the beginning. We wish it could have been better, but I believe the future holds something better. Just wait. We are looking forward to 2021.