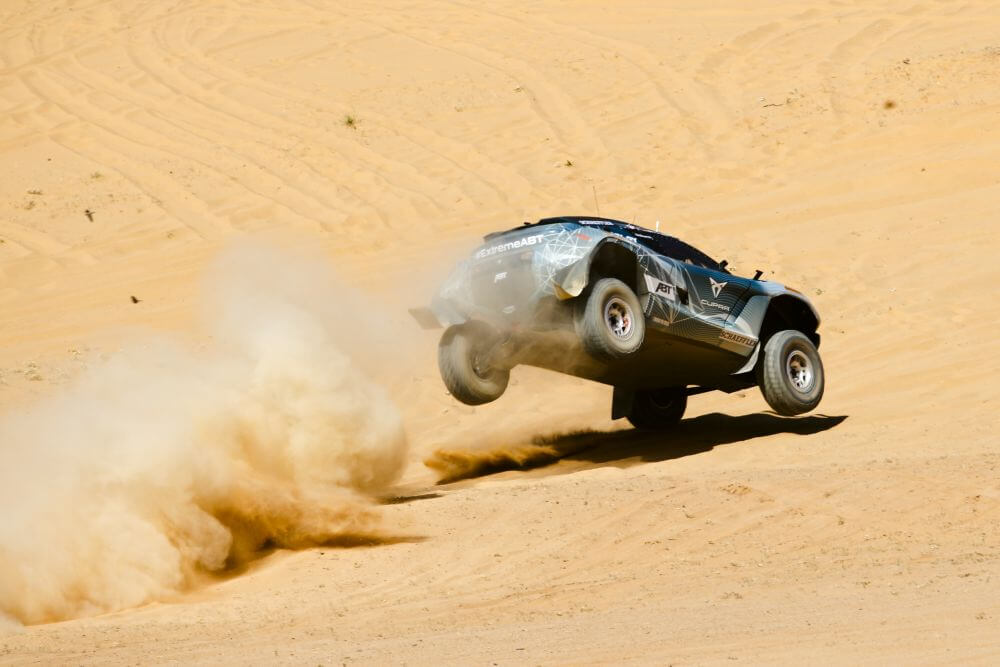 Dazzling desert duel as Extreme E gets off to spectacular start

3 April 2021, London: Extreme E had promised to bring the show in AlUla this weekend (3/4 April), and the opening day of the Desert X Prix did just that with jaw-dropping competition, stunning backdrops, high drama throughout including a heartstopping roll and a sensational scrap to top the Qualifying timesheets – one ultimately won by X44 duo Sébastien Loeb and Cristina Gutiérrez.

The pioneering electric SUV off-road racing series has ventured into the heart of the Saudi Arabian desert for its inaugural X Prix, and the challenging, high-speed 8.8km track layout – laid out in the midst of a breathtaking otherworldly landscape – was designed to push drivers and cars absolutely to their limits. It did not disappoint.

Winding its way spectacularly between canyons, through ravines, across deep sand dunes and punctuated by 33 waypoints, the rock-strewn course was bumpy and undulating in equal measure, with steep climbs offset by ‘The Drop’ – a 100m, 45-degree descent likened by some competitors to tackling a black ski run. For almost everybody, it represented a journey into the unknown – and it produced some memorable action. 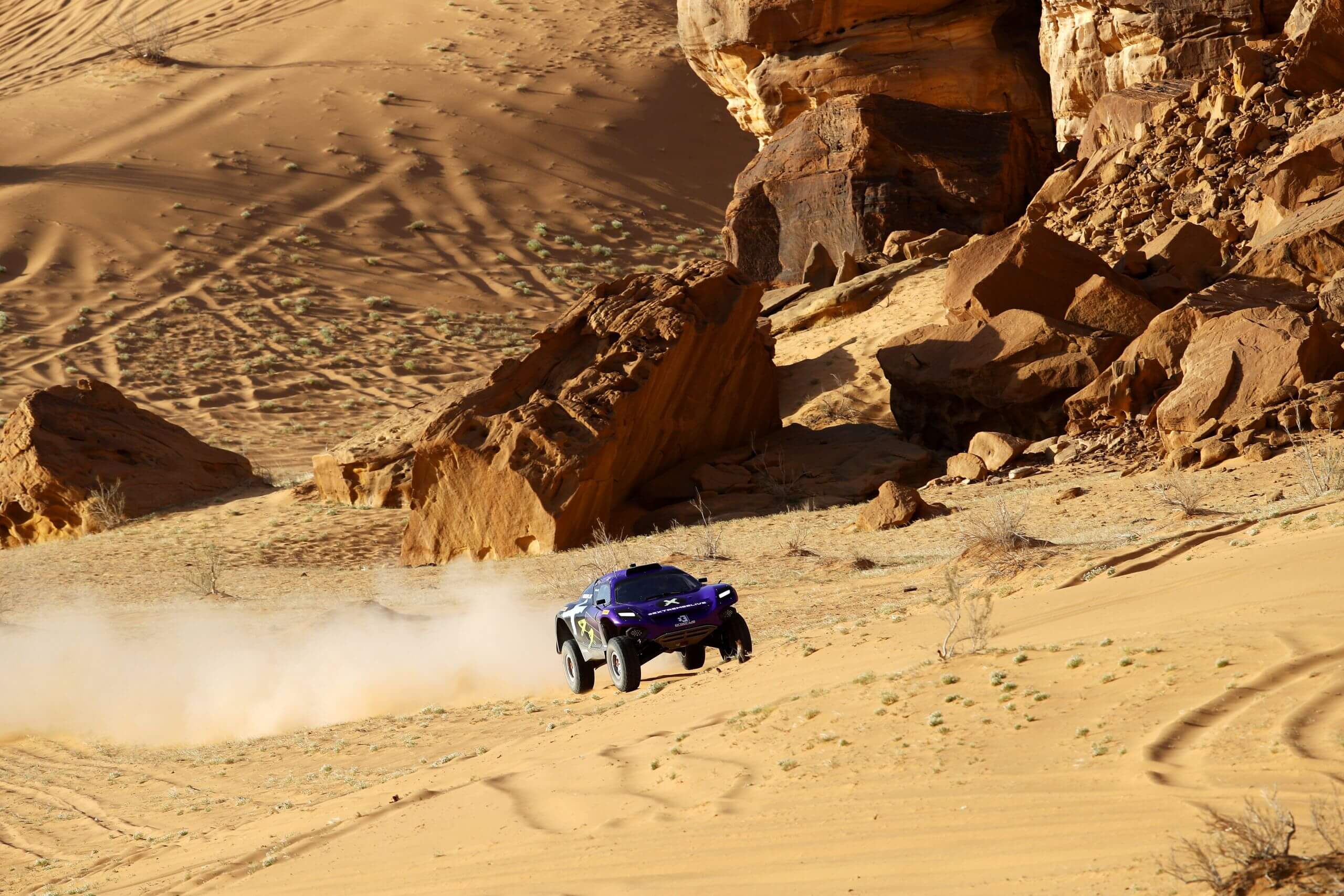 Alejandro Agag, Founder and CEO of Extreme E, said:  “I think the first day of Extreme E has been absolutely fantastic. I have been blown away by the action and the images – there was just so much to look at. It was even better than we expected, and the feedback on social media has been amazing – and this was only Qualifying! I really think we are onto something huge here.”

Three-time FIA World Rallycross Champion Johan Kristoffersson and former Australian Rally Champion Molly Taylor combined to set the pace in the first Qualifying session, with the former showcasing his effortlessly smooth style and the latter demonstrating her famed car control as she artfully held on to a wild ‘bucking bronco’ moment along the way. 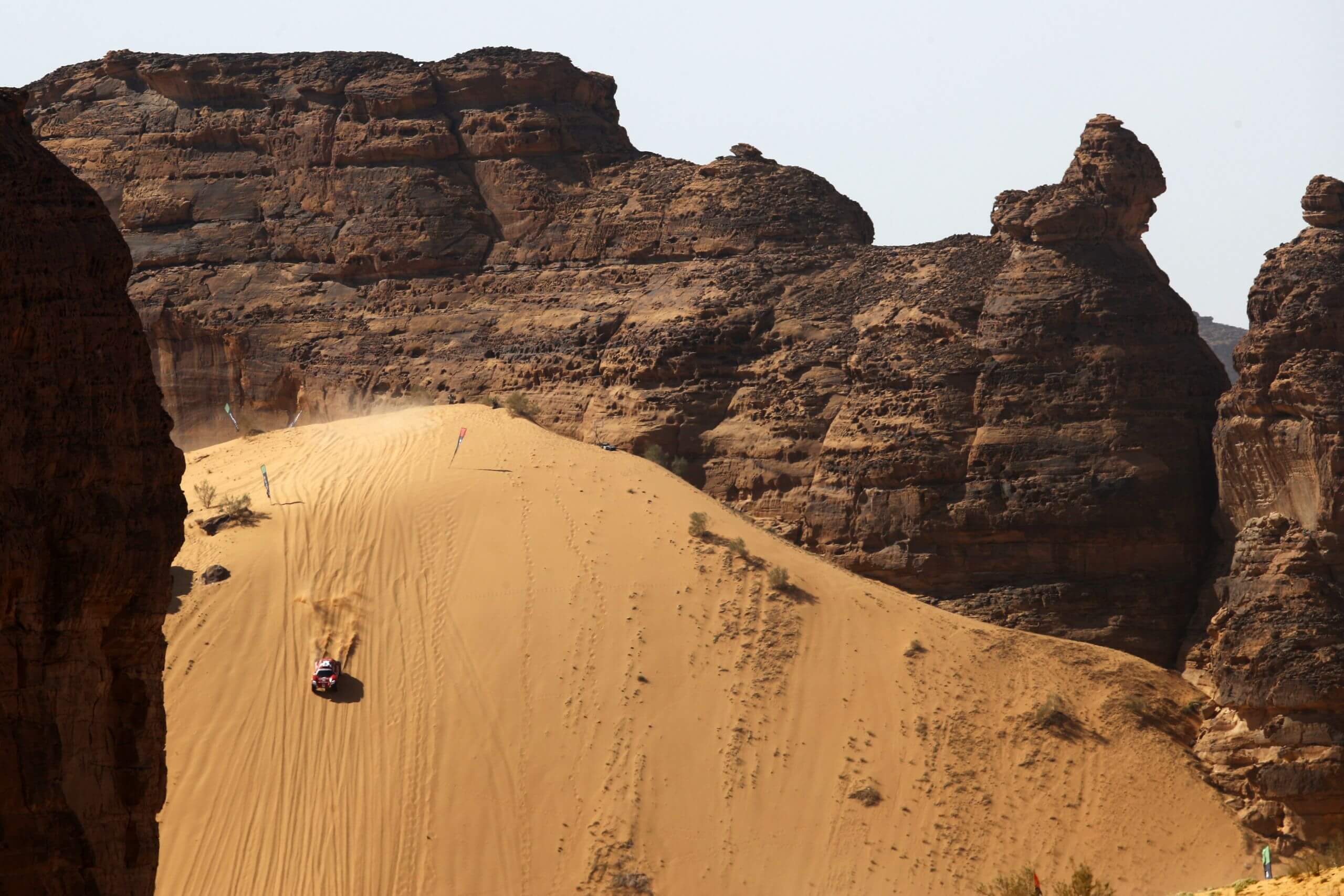 The Swedish/Australian pairing again posted the fastest time in Q2 – stopping the clock just under five seconds quicker than their X44 rivals – but a 60-second penalty for exceeding the 30km/h speed limit in the driver switch zone would cost them the top spot.

That elevated Loeb and Gutiérrez to the head of the overnight order. The French nine-time FIA World Rally Champion recovered well from an early error that required him to gather up a slide after hitting a dip, while his team-mate – the first female Spanish driver to finish the legendary Dakar Rally in the car category – increasingly hustled the ODYSSEY 21 as the day progressed. 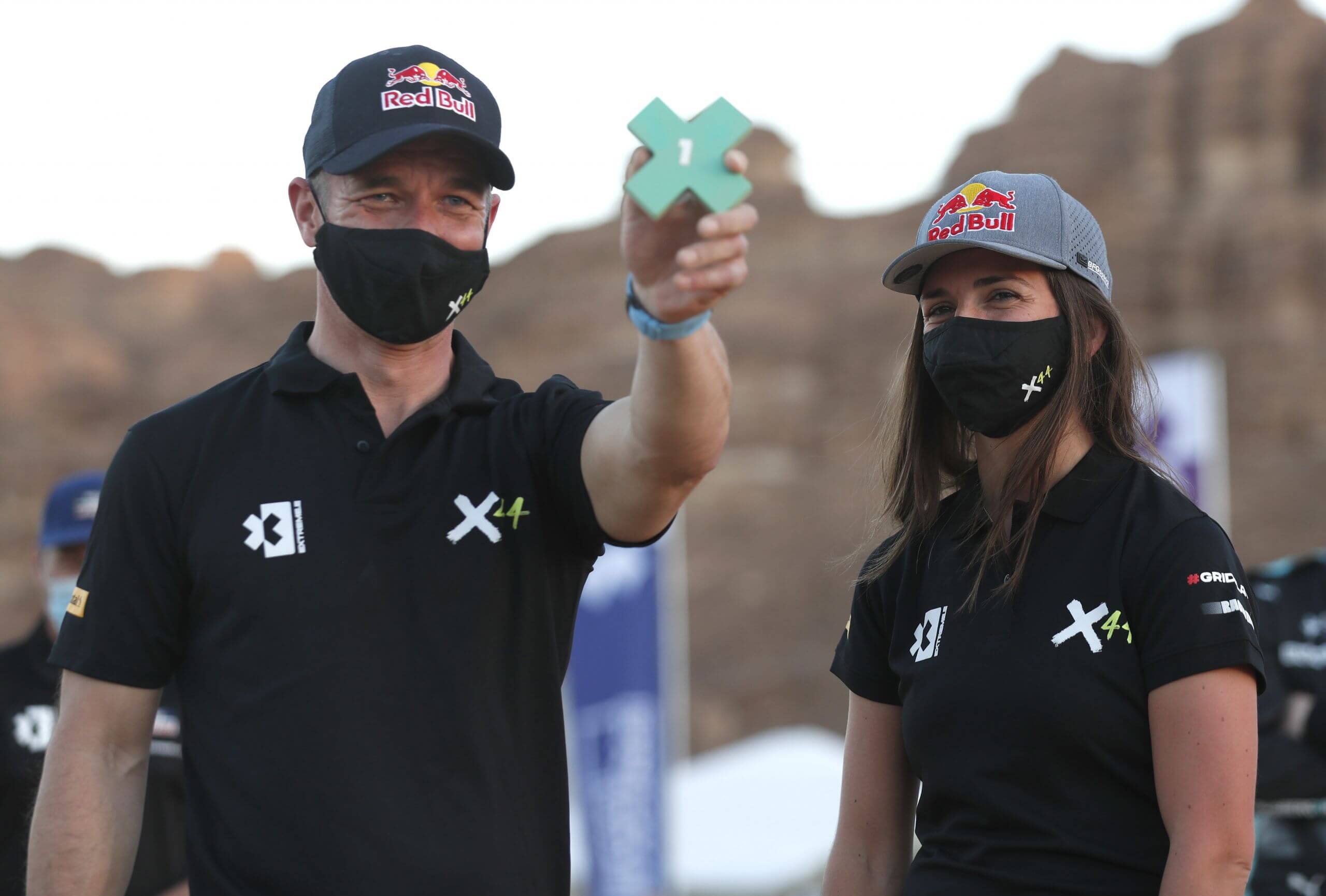 Sébastien Loeb, X44 driver, said: “We’re very happy to have finished Qualifying in first place. Today went really well and the whole X44 team did a great job with the car in difficult conditions. We were the first drivers to get out onto the track so it was hard to know what to expect in the first Qualifying round, but obviously our strategy paid off and we achieved the time we needed to. Tomorrow is a new day and the standard of the other teams will be really high, so we’re just going to keep doing what we’re doing and pushing to win.”

Cristina Gutiérrez, X44 driver, said: “We’ve had an incredible day, but it was also very challenging! We haven’t been able to spend any time in the car for the last few months so it was difficult to get used to it again, but we managed to fight and achieve a good time. To have finished first in Qualifying and have our car still in great condition is amazing; we’re really happy, and we can’t wait to go again tomorrow. We know the other teams are not going to be easy to race against, but we are confident and ready to go.”

Two-time FIA World Rally Champion Carlos Sainz might be the oldest driver in the field, but there was no lack of commitment from the 58-year-old on his first representative run for the ACCIONA | Sainz XE Team following a power steering pump failure during yesterday’s shakedown. The Spaniard impressively pegged Loeb throughout Q2, as his team-mate Laia Sanz – a 13-time Women’s Trial World Champion – demonstrated her rapid learning abilities on four wheels to secure second place for the squad.

Carlos Sainz, ACCIONA | Sainz XE Team driver, said: “Considering it is only the first day of racing, in general we are pretty happy. We set the second-fastest time overall and we scored good points. Tomorrow we will be in the first Semi-Final, from where only two teams will reach the Final. We will try to do a good job. The goal for Sunday is to make it into the Final. We know it will be tough judging by the lap times we have seen today, but the team is in good spirits. The start will matter a lot. It will be the first race we do with all the cars starting side-by-side in the dust, so it will be interesting…”

Laia Sanz, ACCIONA | Sainz XE Team driver, said: “Today was a positive day. There were many unknowns before Qualifying, but we were further ahead than I had expected and I am happy. It was a busy day, but we made it through quite well. Maybe I played it a bit safe in the first Qualifying, but we improved the car for the second session and the times were faster. Extreme E is particularly tricky because you have to be competitive from the very beginning and it is difficult to adapt that fast, but my feeling in the car has improved and we are heading in the right direction. The goal for Sunday is to do a good Semi-Final to finish in the top two, because that would put us into the Final, which would be a great result for this first weekend of racing.”

Rosberg X Racing did enough to hold onto third spot overall once the penalty had been applied, seeing Kristoffersson and Taylor safely through to tomorrow’s main Semi-Final.

Johan Kristoffersson, Rosberg X Racing driver, said: “It’s been an intense start to the weekend but the team has done a great job to help us go P3 in Qualifying, score strong points and put us into the Semi-Finals for tomorrow. Molly and I are both learning more about the car every time we head out on the course, and we have a lot of feedback to run through with the engineers to make sure we are in a strong position to go racing.”

Molly Taylor, Rosberg X Racing driver, said: “It’s been a strong start to the weekend for RXR, and I’m happy with our performance. The course is changing a lot during the sessions because of the ruts and new tyre tracks that are appearing, so every lap feels different to the last and is a new challenge. We had some wild moments in Qualifying 1, but we managed to keep it pinned to go fastest and have a strong run in Qualifying 2 to make it through to the Semi-Finals tomorrow.” 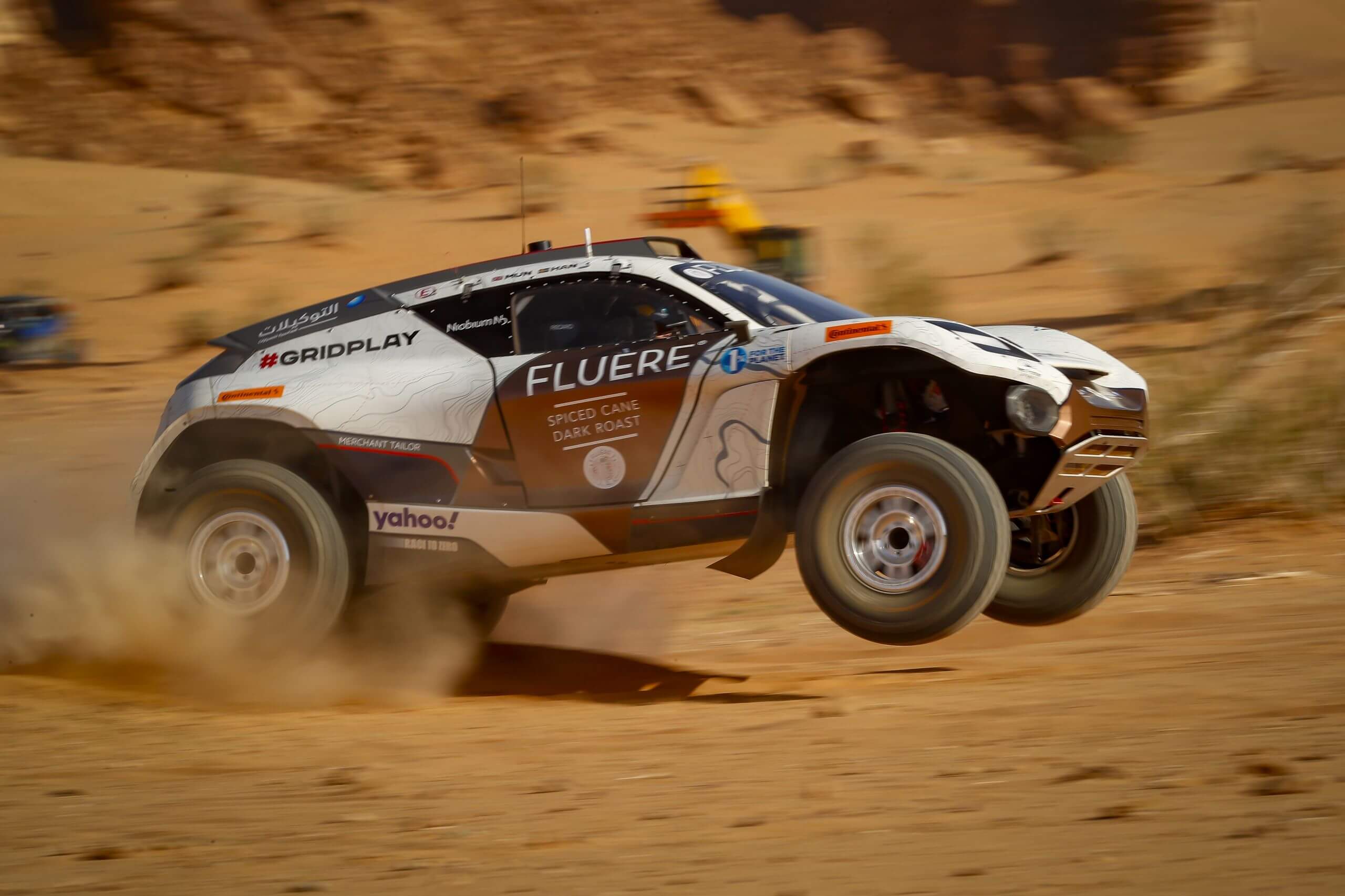 Andretti United was similarly right on the front-running pace, but a puncture in Q1 cost the team time and prompted a heroic effort from Catie Munnings, who completed much of her lap with the car crabbing as the right-rear tyre dangled precariously off its rim. That restricted the Briton and Swedish team-mate Timmy Hansen to fourth overall and means they will need to navigate their way successfully through tomorrow’s ‘Crazy Race’ if they are to reach the Final.

They will be joined in the Crazy Race by Hispano Suiza XITE Energy Team (Oliver Bennett / Christine Giampaoli Zonca) and JBXE (Jenson Button / Mikaela Åhlin-Kottulinsky), neither of whom had trouble-free days. The former picked up a 75-second penalty for speeding in the driver switch zone, while the latter lost time with a brief on-course stoppage after hitting a bump in Q1.

A promising run for Button and Åhlin-Kottulinsky in Q2 was then undone by penalties totalling just shy of three minutes for a switch zone infraction and speeding, although the 2009 F1 World Champion’s team was dealt a get-out-of-jail-free card by even greater problems for three of their adversaries.

Following a difficult Friday, Segi TV Chip Ganassi Racing’s woes continued into today in Saudi Arabia, with a power steering issue requiring Kyle LeDuc and Sara Price to physically wrestle their ODYSSEY 21 to the end of Q1 – a situation that the former described as ‘a fist fight’ inside the cockpit. Further gremlins then prevented Price from even reaching the start-line in Q2, meaning she and LeDuc will be restricted to the ‘Shoot Out’ tomorrow.

Other teams in the wars were ABT CUPRA XE – whose female driver Claudia Hürtgen thankfully emerged unharmed from a sizeable barrel-roll almost within sight of the Q1 finish line – and Veloce Racing, with Stéphane Sarrazin’s roll enough to rule the British outfit out of the remainder of the weekend.

Alejandro Agag: “There were some heart-in-the-mouth moments today, particularly for ABT CUPRA XE and Claudia Hürtgen. I think it’s safe to say we are all pleased to see her walk away from the crash – it is a testament to CBMM Niobium and their robust and tough chassis, which was put to the ultimate test today and delivered.”

Sunday’s racing will get underway at 09h00 local time, with the Shoot Out, Crazy Race, Semi-Final and Final (13h00 local time) set to determine who will walk away with the honour of being crowned Extreme E’s very first X Prix winner.