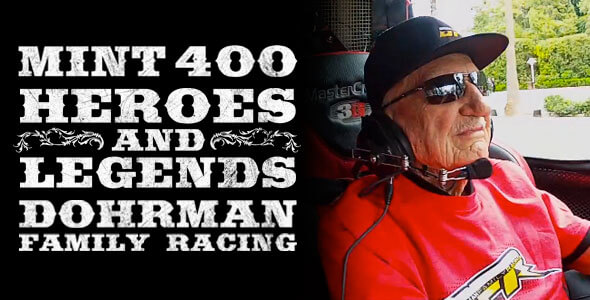 Dohrman Family Racing: Heroes and Legends of the Mint 400

There were a lot of firsts at the 2013 General Tire Mint 400 presented by Polaris.  Starting last off the line at this years race was 94 year old Paul Dohrman, aka #IronGramp. Grandpa drove the Dohrman racing Class 1800 car off the start line, making him the oldest driver ever to race in the Mint 400. For the Dohrmans, off-road racing isn’t just a past time. It has brought four generations of thier family closer together. Dohrman Family Racing began about eight years ago when they started getting heavy in to off-road but have been racing since 1977.

“I’m not nervous about it no but I am excited about it because when I came to California years and years ago, little did I ever dream that at ninety four years old I’d be sitting here talking to you about starting the Mint 400 at my age.  So I’m really excited about it and really thankful and blessed that I can do it,” said Paul Dohrman.