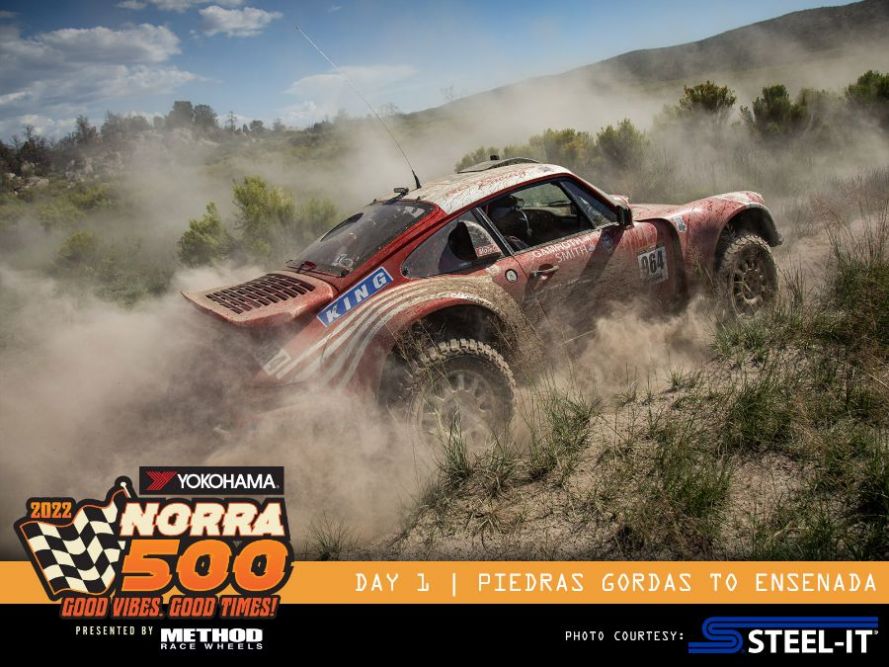 AGUA DULCE, CALIF. – After a full day of tech and celebration on Thursday, NORRA racers got their first taste of the dirt, literally. The route included two special stages where vehicles are going full speed, and three transit stages to connect everything together. Special stage one travelled from Piedras Gordas to kilometer 62; a distance of 70.7 miles. Stage two started at kilometer 54 and ran a big loop through the pine forest to the finish back in Piedras Gordas. Stage two was 114 miles long. The team with the lowest elapsed time, and no penalties, would be the leader. Rally rules give competitors a set time to navigate the transit stages. If you are early, or late, you incur a penalty. During the special stages, you are free to go as fast as you like. Rally racing is about navigation. They follow a road book that tells them where the course goes. It’s a speed contest, but also a challenging mental exercise. It’s one of the many things that make NORRA stand apart from other events. 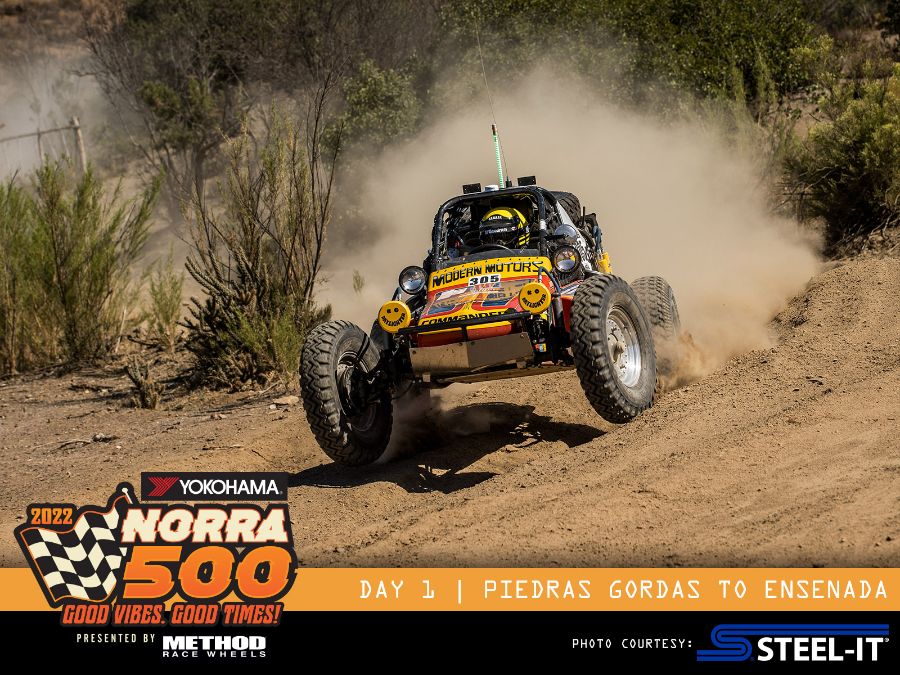 Remnants from Hurricane Kay were still everywhere in the form of ruts, and standing water. Vehicles were plastered with mud after completing the course. There is nothing worse than hitting dry silt, then water, followed by more dirt and mud. Racers were battered by the terrain, and battered with mud at the same time. The mud holes were only one challenge they would face. The route through the infamous pine forest was very challenging. The tight technical trail through the trees and rocks gave an edge to the smaller, lighter vehicles. Some of the UTV’s made up a lot of ground on the faster and more powerful unlimited cars and trucks.

Dave Mason had a great run in his Evolution Unlimited class buggy. He started 15th physically and crossed the finish line 4th on the road. His time was the fastest of the day putting him in the overall lead. “It feels good to be here,” said Dave. “We kept a smooth pace; no down time and no dumb mistakes. We need to do the same thing tomorrow. It was a tight, technical course. We love NORRA events.” 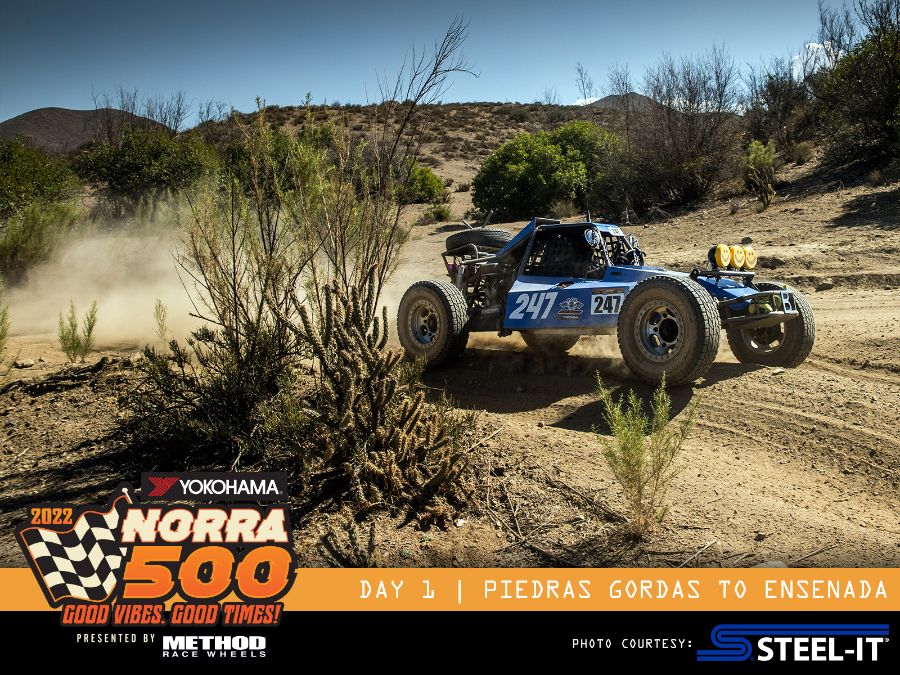 Darin Harris finished ahead of Dave Mason physically, but took the start ahead of him also. Darin’s total time on course put him in the 5th spot overall. He and his brother now own and race the infamous Total Chaos Toyota formerly driven by Dan Vance. “It was an epic day today,” said Darin. “We came across a rancher who had a rope across the trail. He wanted money to let us pass. We had to dig around to find some cash. That cost us some time, but it was a great day of racing.”

Matt Hylton was second fastest, and Brad Bauder third. The advantage of the smaller cars on the technical course was demonstrated by 4th place overall Thomas Purcell in his Evolution Open UTV class Polaris Pro R. Finishing in the top 5 against unlimited vehicles is quite a feat. “We did OK for the first time driving this new car,” said Thomas. “We spent a lot of late nights to get here. We had some gremlins that cost us some time. We were running in two wheel drive. We’ll fix the issues and hopefully move up the line.” 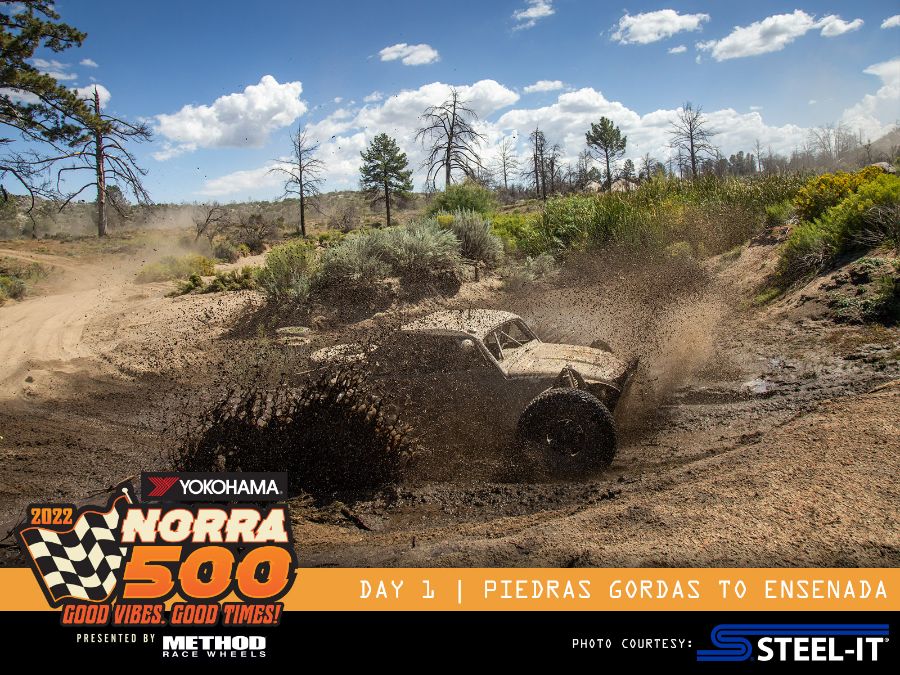 Craig McCarthy who hails from New Zealand had a solid day in his Geiser Trophy Truck. Craig started the race and then turned it over to one of his co-drivers while he navigated. They joked about hitting a rock that caused a flat tire; it was the rock’s fault. They said despite the challenging course their truck handles great and the road book was great. Craig also said the water was good for keeping them cool.

A very muddy PJ Jones took the 7th place overall in his PJ’s Performance Evolution Open UTV class Can Am X3 RR. He said they lost a CV boot, but the crew caught it and made quick repairs so they didn’t lose any time. The top finishers were a diverse group of trucks, buggies and UTV’s but were all racing in the Evolution Era that represents the latest technology. Finishing in 8th and 9th place overall were the Vintage Era class 5 cars of Hap Kellogg and Rick Paquette. The class 5 cars are always extremely competitive against each other, and the pace they battle at regularly puts them up into the fastest group of vehicles. The names change, but the VW based cars prove why they are so popular over the years. They are nimble, fun to drive and very fast in Baja terrain. Taking the 10th spot overall was Cameron Ornelas. He was also fastest in the Evolution Modified Turbo UTV class driving his Can Am XRS Turbo. 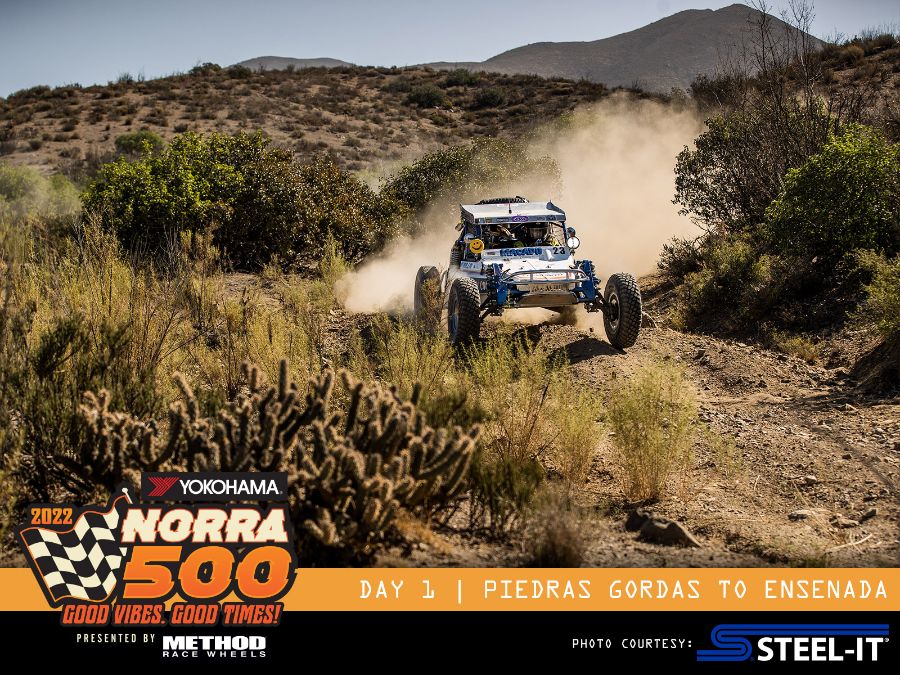 As competitors came across the line they had many interesting stories about their first day of racing at the NORRA 500. Charlie Peltzer was driving his 2008 Porter buggy with brother Nick calling out the directions from the road book. Nick said that Charlie was driving so fast that it was a challenge turning the pages fast enough to keep up. Trevor Glidden remarked that it was awesome, and so beautiful on the course. He said it wasn’t the best course for his big Vintage class truck, but was all smiles. Hap Kellogg who finished first in the Vintage class 5 category called it a wet one. He said it was muddy and technical, but there were a lot of fast spots. His co-driver added that it was technical and rough; they only missed a couple turns; well done NORRA. Kevin Adler said it was awesome, flawless, and all that mud up in the pine forest was no joke. Hall of Famer Mark McMillin, who has seen a lot of Baja during his many years of competition, said there were a lot of puddles but it was passable. “Our 1979 Chenowth has been with us for a lot of years. We had a lot of fun out there.” Mark and co-driver Rory Ward finished 26th overall in their Vintage Era 6 cyl. Buggy. Finishing 25th overall was Ryan Baillargeon in his Vintage Era 4 cyl. Buggies VW beetle. What it must feel like to say you beat Mark McMillin and Rory Ward racing in Baja. At least for today Ryan; congratulations.

When the racing ends, the celebration begins. Teams have plenty of time after the day’s competition to work on their cars, have some fun with their friends and drink a toast with fellow competitors at the finish line celebration before doing it all again the next day. The route on Saturday will be very technical in some spots, but have more open desert sections where the unlimited vehicles can stretch their legs it will be interesting to see the results. www.norra.com