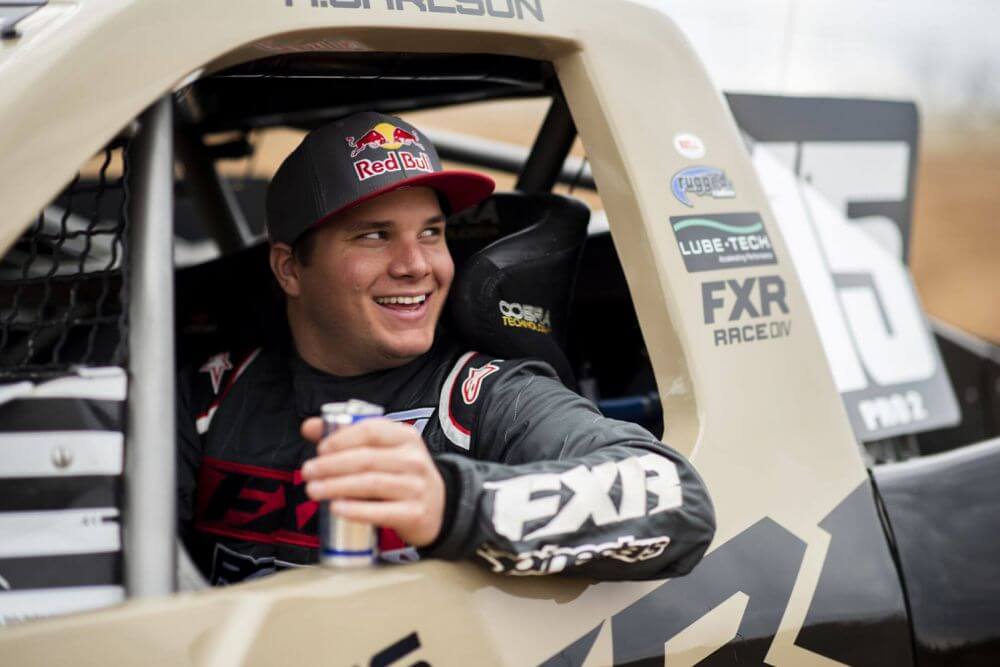 Located in the lush greenery outside Minneapolis, Minnesota, you’ll find one of the most electrifying off-road parks in America, quite possibly the world.  Boasting numerous tracks, year-round entertainment, and adventure riding, ERX Motor Park is the mecca for any off-road racing enthusiast. It’s also the headquarters for Carlson Motorsports, led by Pro-4 and Polaris RZR driver, Andrew Carlson. Carlson, a former professional Factory Polaris Snocross racer, began his off-road racing career in 2014 as a way to stay sharp in the off season.

As a high school graduation present in 2011, Carlson traveled to Bark River Raceway in the UP of Michigan to enjoy some off-road racing.  It was there he was bitten by the bug, and soon began an incredible racing career. He immediately became a student of the sport, studying the mechanics and logistics of off-road racing. “I just wanted to learn as much as I could, and how it all worked,” Carlson explained. A few years went by, and his UTV racing career began.

With backing from Polaris, Carlson had a very successful early career including his X-Games Snocross debut and UTV racing in the off season, but things really picked up when Carlson Moto went full throttle into the TORC series.  In 2015, after renting a Pro Lite truck from friend and fellow racer Doug Mittag, the dream of racing in the short course series would now become a reality, and it was time to race in St. Louis, MO.  While Carlson was no stranger to high speed off-road racing, as well as the winner’s podium, we can all agree the step up to the Pro Lite series was a big one.

Over the past several seasons, the team has amassed many wins at multiple venues, and Carlson continues to strive to be the best champion he can be. He has now become one of the top Pro-4 drivers in the Short Course series.  Hammering down the 900+ horsepower truck is Carlson’s office, and we are all a bit jealous.

We discussed any possible inspirations, or racers he may have looked up to over the years?

“To be honest there are a few that I have always enjoyed watching, and I’ve always studied closely why the top winners were so good.” Carlson said.  He continued by explaining, “Everyone has their own way of racing, and even though I study key points I wanted to have my own style. It takes so long to unlearn a bad habit and I didn’t want to learn any other way than on my own.”  He went on to explain a bit of a natural gift in giving highly-detailed shock and tuning feedback to his crew, which helps tremendously in fine tuning exactly the way things need to feel and perform.

While discussing his many wins and accomplishments, we asked what might be his fondest memory during his racing career?

“By far it has to be between my first Pro Lite win and first Pro 4 win, it’s very difficult to choose between the two.  What makes it even greater is that they were both at ERX Motor Park in front of my home crowd. Those two wins, I will never forget.” He proudly explained. It’s clear what a great feeling these two wins gave Carlson, his crew, and family.

Describe the feeling that goes through your mind just before the green flag drops?

“Typically I’m more of a quiet, calm, and reserved person.  It’s funny because people that don’t know me well ask me if I ever smile.  If I’m close to you, or you’re with me in the pits, I am a bit more outspoken.  I take my racing very seriously, and I’m there to win.  Just before a race I try to relax and stay focused without overthinking things.  The more I think, the more nervous I become, so I do my best to relax without any negative thoughts.”

Same question, explain a bit what’s’ going through your mind after taking the checkered flag?

“I’ve learned to not celebrate until the race is over, and I also can’t overthink anything either.  It’s a calculated balance of relaxation and high-speed maneuvering all at the same time. For the most part it takes a little while for the feeling to sink in after I’ve taken the win.  Eventually I let myself celebrate.” (laughing)

When Carlson isn’t on the track, both he and his father are avid hunters and anglers. In fact, his father Chris is a professional angler himself, so you can be sure Andrew grew up with the best tips and tricks to wrangle in the big ones. Being outdoors has always been Carlson’s best mental release, to completely clear his mind and refocus.  Another form of relaxation for Carlson is constantly making tracks.  Whether it be for pit bikes or UTVs, shoveling dirt and making courses is his form of therapy.

How have you stayed busy during this downtime of Covid-19?

“I actually haven’t changed a thing!  I’m at the shop nearly every day, and have been fortunate to get a lot done.  I have been able to focus, and continue to drive the track and hone my skills.” Carlson stated.  He continued explaining how he’s stayed busy, “I have been pounding more laps during Covid than I probably would have during a normal racing season.”

He continued to explain how thankful and fortunate he is for his relationship with Polaris.  “They have been incredibly supportive of me and the race team over the years.  It’s perfect since they are literally just up the road.  Our teams are able to work together and dial things in for our program as well as theirs.  It’s a perfect mutual relationship.” Carlson and his team have even dialed in his RZR cockpit to be an exact 1:1 mockup to his Pro 4.  The seating position and controls are a perfect match, which help him and the crew make adjustments on the UTV, then mock that same adjustment on the truck. The reason for this is constant driving and testing on the track is much less of a headache with a UTV.  There is a fraction of the moving parts, and with the UTV he doesn’t require a full team present.  Whereas testing the Pro 4 it takes many more resources.

Explain a bit  on how excited you and Carlson Moto are for the start of the race season, albeit a late start due to Covid?

“We couldn’t be more excited!  We have been so busy preparing for this.  It’s also really cool that ERX is the first short course to be taking place, as others have continued to be canceled or postponed. What’s really great is the amount of trucks we have coming out to race.  We always want to share the track, and it’s going to make the competition really eventful. We are all just so pumped to just get out and race!”  He exclaimed.  In speaking with a lot of racers over the past several months, that seems to be the consensus. IT’S TIME TO RACE!

Carlson wanted to also point out how truly great his sponsors have been during this shutdown. Their support has been phenomenal, in fact companies like Yokohama, Fox, Polaris and Bell helmets have all ramped up their support. “These incredible companies even doubled down in a sense.” Explaining they even put more into his teams program enabling him to keep pushing forward to be the best. While other racers have noticed the sponsorships have been put on hold.  He also points out the support from his family, and the entire race team has always been incredible.  He proudly told us, “It really helps to have so many amazing people around you that have the same goals.” Carlson Moto is indeed a family affair with Andrew’s parents Chris and Deb as team owners, and sister Taylor working hard as the Marketing Director. Andrew’s wife, Courtney, is also a big part of the team.

July 10th-11th kicks off the delayed race season at ERX Motor Park, and you can bet the crowds will be really for some intense competition, with Carlson and many more drivers on the track it’s likely they are going to get exactly what they paid for.  We can’t wait to see that green flag drop!