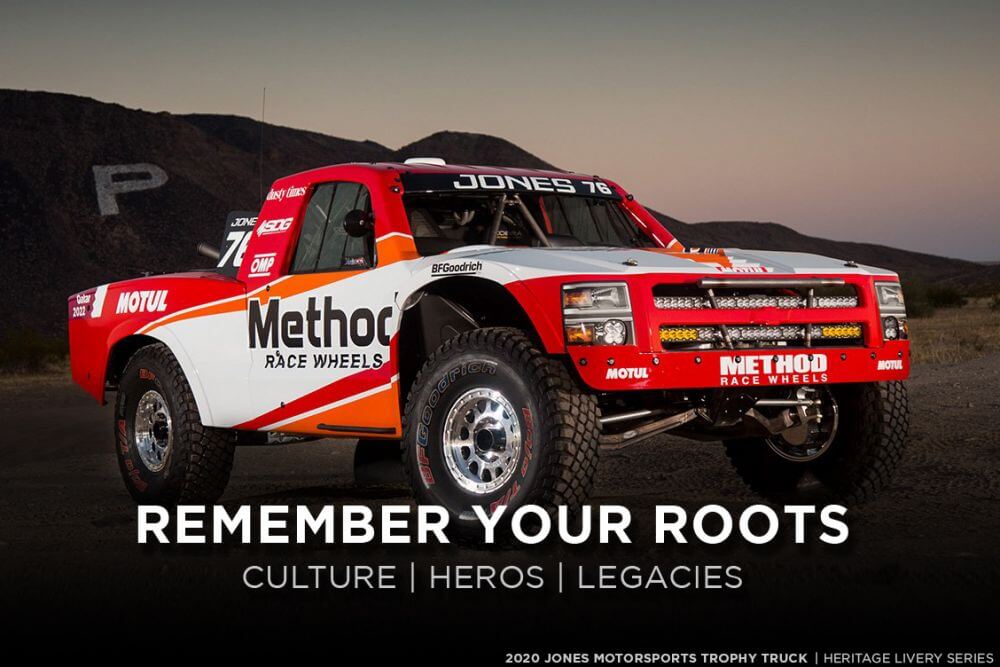 Everything you need to know about Jesse Jones’ Heritage Livery

Words by Rory Ward | Photos Bink Designs & Rory Ward
You could hear that raspy eight into one exhaust well before you could see it, then that bright red, orange and white paint job emerged only to flash by seconds later.  If I close my eyes I can still hear that motor singing across the desert.  That’s what I remember about the Dave Ashley/Dan Smith Enduro Racing Duralast Trophy Truck.

So why in the hell is Jesse Jones’ new Mason Motorsports 4 wheel drive Trophy Truck (TT) running the Duralast Livery?  Well, Method Race Wheels is doing this “Heritage Livery Series” thing. They Jedi mind tricked good ole’ Jesse Jones into using his TT as a blank canvas to do whatever they want for the paint job. Method’s idea is to do a throwback paint job on the number 76 unlimited truck whenever it races. The only drawback I can see is trying to figure out which livery to use. For the BITD Bluewater Desert Challenge race in Parker AZ, the Duralast livery was chosen.

Enduro Racing History
Enduro racing was owned by none other than Dick Landfield, a Ford dealer in Southern California. Dick started racing at the 1969 NORRA Baja 500 in a Ford Bronco and fell in love with the sport. His contributions to off road racing consist of being one of the founding members of this “First association of independent racers” (F.A.I.R.) pit support team, was the brainchild of one of the most successful desert motorsports “Super Teams” in off road racing, the Ford “Rough Riders” and also talked to Mickey Thompson into starting the Annual SCORE show on a bet! Dick was inducted into the Off Road Motorsports Hall of Fame (ORMHOF) in 2007 which was a no-brainer if you ask me.

Dave Ashley was a very successful motorcycle racer who won a gold medal at the Six Day Trials in Austria. He transitioned into desert racing in buggies, trucks and stadium vehicles.  Dave would end up managing and driving for the Enduro racing team with much success including behind the wheel of the single seat Duralast TT. His contributions to the sport consisted of being the chair person for the driver’s safety meetings, as well as working with promoters to avoid hidden hazards. You could also find Dave working with younger drivers and showing them the ropes so to speak. Some of his best work was working with Ford engineers to make their products better. Transmissions, steering, chassis development and Special Vehicle teams (SVT) were just a few of the things he consulted on for research and design. It’s no wonder why Dave Ashley was inducted into the ORMHOF in 2014, sharing a table with his boss.

Sal Fish called Dick and said he had a guy from Duralast batteries that was looking to sponsor a race vehicle. A deal was made for the 1996 season and the Enduro Racing Rough Rider Ford class 8 would run the Duralast logo on the rear quarter panel. In the first race of the season, in that 4-wheel drive Ford F-150, with that brand new sponsor, Dave Ashley and Dan Smith would push that Ford truck to its first win and a very impressive 5th overall at the Parker 400.

A championship would follow and Enduro Racing started looking for the next challenge, the Trophy Truck class. With a new truck not quite on the horizon just yet, they would rework that class 8 (originally built as a 4 wheel drive class 4) and turn it into a Trophy truck for the 1998 season. With great success the choice was made to have a new built truck.

Bill Savage had a chassis he had been working on and he and Dick worked out a deal. The single seat Baja Truck chassis was built and reworked with input from Dave Ashley and debuted at the 1999 SCORE Laughlin Desert Challenge.  Impressive as the truck was, the sound of it was even MORE impressive. That eight into one exhaust was mesmerizing. It took a while to work the bugs out but boy was it worth it. The biggest race ever for SCORE would be the Baja 2000 held in honor of the new millennium. The Duralast Trophy Truck would prove its worth and defeat a stacked field of drivers and factory teams to win the biggest race in off road racing history.

It’s only fitting that Jesse Jones and Method wheels would kick start this adventure at Parker with a Mason Motorsports 4 wheel drive unlimited truck with a Duralast livery. Can history repeat itself like it did with Enduro Racings entry at the 1996 Parker 400 with a 4 wheel drive Ford F-150 and its new sponsor Duralast? I guess we’ll just have to wait and see.