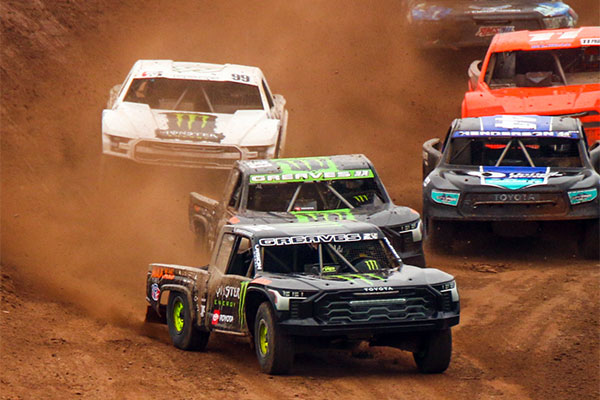 Bark River, MI ( August 14, 2022)–Bark River International Raceway is clearly many drivers favorite track. CJ swept last year’s Pro4 race and Johnny has won many races there too. The Greaves Duo, coming off of a somewhat disappointing weekend at Dirt City, were looking to grab some podiums and stay in the points battle in multiple classes. The weather was miserable and hampered most of the racing on Saturday but Sunday was much better. CJ Greaves took his 2nd consecutive win in his Monster Energy/ Polaris/Maxxis Tire/ Vision Wheel Pro Stock SXS on Saturday and followed that up with a 2nd place finish on Sunday. He came back from some bad luck on Saturday to win his first race of the year in Pro Turbo SXS. CJ also took a win and 2nd place in Pro-4. John Greaves had some trouble on Saturday but it was a Monster Energy sweep on Sunday with John filling the 3rd spot on the podium.

Pro Stock SXS
Saturday: CJ Greaves was anxious to dig into the points lead of Brock Heger as the 15 car field lined up for Saturday’s Pro Stock side-by-side race in Bark River. The Sportsman races did all they could do to squeeze out the mud of the rain soaked track earlier in the day. But the track was basically one lane with mud on both sides. With Heger starting on the pole, CJ would have to dig hard to work his way to the front from his 5th spot on the grid. He wasted no time moving up, passing Owen VanEperen in the cemetery turn to take over 2nd and go after the front running Heger.

As the top two checked out from the field, Greaves was right on the rear bumper of Heger at the halfway point of the race. As they took the competition caution, Heger had a right rear flat but chose not to get the tire change during the caution. On the restart, CJ quickly took his Monster Energy Polaris to the lead as Heger began to go backwards. Greaves’ Maxxis tires were hooking up great with the track conditions that propelled him to a 3-second lead over 2nd place. He cruised on to take his 3rd win of the season and his 2nd in a row.

Sunday: CJ rolled off from the pole position but points leader Brock Heger was right behind him for the 2×2 start Sunday. When the green flew, CJ and Heger went nose to tail and checked out from the field by 8 seconds. CJ held the top spot through the first 3 laps but Heger pushed him into the soft dirt and took the lead. The two continued their dominance by again pulling away to a sizeable lead in the second half of the race. They crossed the finish line with Heger taking the win and CJ coming in 2nd.

Pro Turbo SXS
Saturday: CJ started on the pole of the turbo side-by-side class on Saturday in hopes that his luck would change as his team continued to dial-in his Monster Energy Polaris. CJ took the green flag with the 29 car field in tow. His string of bad luck in this class continued as he ducked into the hot pit for a tire change early in the race. He was able to work his way back up to a respectable 13th by the end of the race.

Sunday: CJ Greaves was hoping for just a little luck to make it to the end in the Sunday Pro Turbo UTV class race and rebound from Saturday. He started on row 2 and was able to win the early battle with Rodney VanEperen for the the lead as they exited the sweeper turn. A red flag however stopped the racing and gathered the field up for another restart after only about 3 laps. On the restart, Greaves and VanEperen took up where they left off with a lot of time left on the race clock. It was Rodney’s turn for bad luck as his safety net came loose which required him to pull into the hot pit. This left CJ unchallenged up front and he completely checkout from the rest of the field. He continued to dominate and took the much needed win.

“That was the longest second half race,” said CJ following the race. “The white flag could not come soon enough but we made it to the end!”

Pro-4
Saturday: The Johnny and CJ Greaves Duo started on the front row of the Pro4 race on Saturday. With LeDuc on row 2, it would not take long for the fierce rivalry to heat up. The 10 truck field continues to get more competitive each race weekend. The Bark River track is a perfect test of the racing skills with long runs, sweeping turns, and big jumps. The 2-by-2 rolling start, in lieu of the normal landrush, put the Greaves Duo out front early. But Johnny got crossed up, taking a ride off track that sent him to the back of the field. CJ and LeDuc were already mixing it up. LeDuc pushed CJ out of the race line into the rough which gave him the lead and dropped CJ back a couple positions. The younger Greaves was able to battle back and reclaim 2nd in the cemetery turn.

As Greaves and LeDuc battled, LeDuc blew a right rear tire. He literally was riding on the rim of the wheel before he could get to the hot pit for a tire change. He was able to make the change ahead of the competition caution and rejoin the field, still on the lead lap.

Following the competition caution, the “wild man” Adrian Cenni made a run for the top spot which he was able to take momentarily. CJ lost 2 spots in the exchange but Jimmy Henderson and Cenni got into each other, spinning Cenni out. Greaves took advantage and regained the lead. Meanwhile, Kyle LeDuc was making his way back up to the front. CJ was able to stretch his lead and took the win. LeDuc came back to claim the 2nd place spot.

Sunday: All of the races on Sunday produced a lot scrap pieces of fiberglass. Mayhem, bumping and grinding were the name of the game. The Pro-4 would feature much of the same. LeDuc started on the front row and was untouched throughout the race. John and CJ had to battle hard and shed some body panels to get to the podium. On the first lap, Cenni spun-out in the cemetery turn just in front of John Greaves. With nowhere to go, Johnny tagged Cenni with his left front fender, bending his A-arm and making for a poor handling truck the rest of the race. CJ ran out of patience and went on the attack. He had to get around Cenni who was running in 4th. He pulled a great crossover move to takeover the spot.

A full course caution came out due to the overturned truck of Ben Passa. It turned out to be a piece of luck for Johnny as he over rotated and went over the berm and off the track just as the caution was coming out. This allowed Johnny to go back to 3rd and CJ behind him in 4th for the restart.

On the next lap, Johnny and Jimmy Henderson tangled up with Henderson’s machine spinning out. CJ was able to take advantage and passed both machines into 2nd. Johnny followed CJ around Cenni to take over 3rd which is where they finished the race. The podium was another all Monster Energy sweep.

Next Race
The season finale will take place on Labor Day weekend at Crandon International Raceway. CJ will be vying for his 2nd Pro4 championship in a row. It will likely produce some very exciting and intense racing.