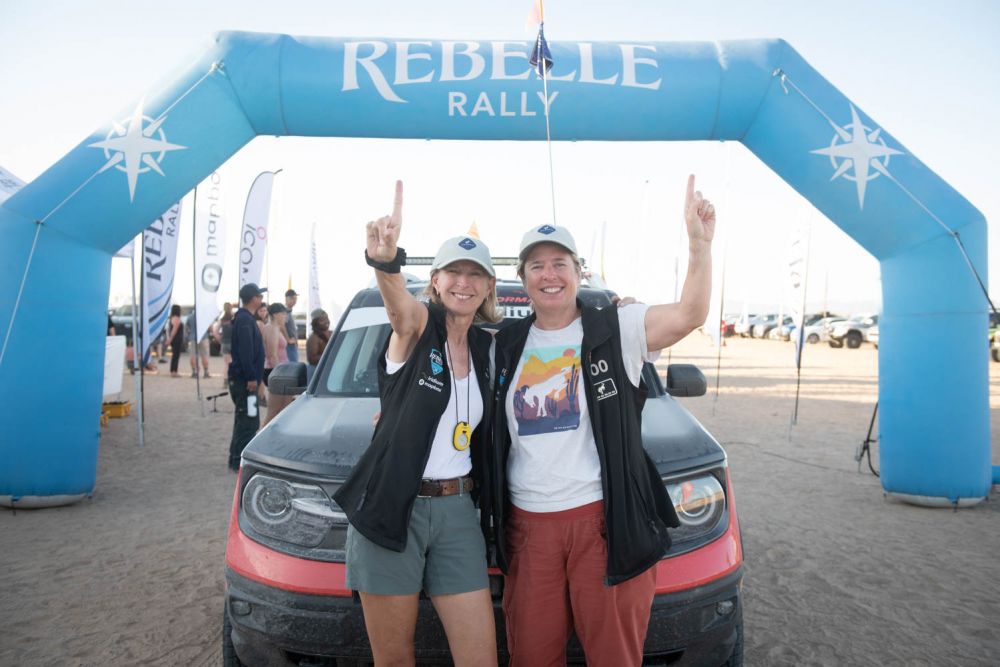 October 16, 2022
Rebelles spent yesterday relaxing in the Imperial Sand Dunes (Glamis) following the completion of the seventh edition of the Rebelle Rally. Guests were treated to massages, TOTAL Chaos hot laps, and competition demos before gathering together for Rebellation, an awards ceremony and gala in the desert presented by Jeep. Final Standings were posted earlier in the day and are as follows:
2022 Rebelle Rally Results 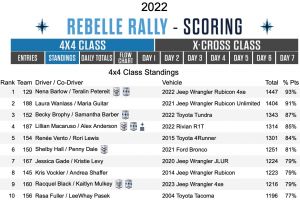 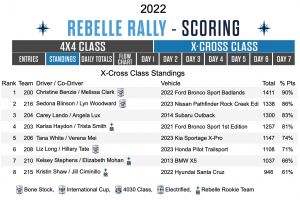 Once again Team #129 4xEventures (Nena Barlow / Teralin Petereit) won the 4×4 Class in their Jeep Wrangler Rubicon 4xe, earning a custom trophy and $5,000 each towards next year’s Rebelle Rally as their prize. They also were the top-placing team in both the 4×4 Bone Stock and Electrified designations. Electrified is a special designation that was started in 2020 for EVs and PHEVs that are charged during the rally via Renewable Innovations. Bone Stock, as the name implies, requires vehicles to be exactly as delivered from the manufacturer, with the only allowance for factory-sized aftermarket tires and wheels. 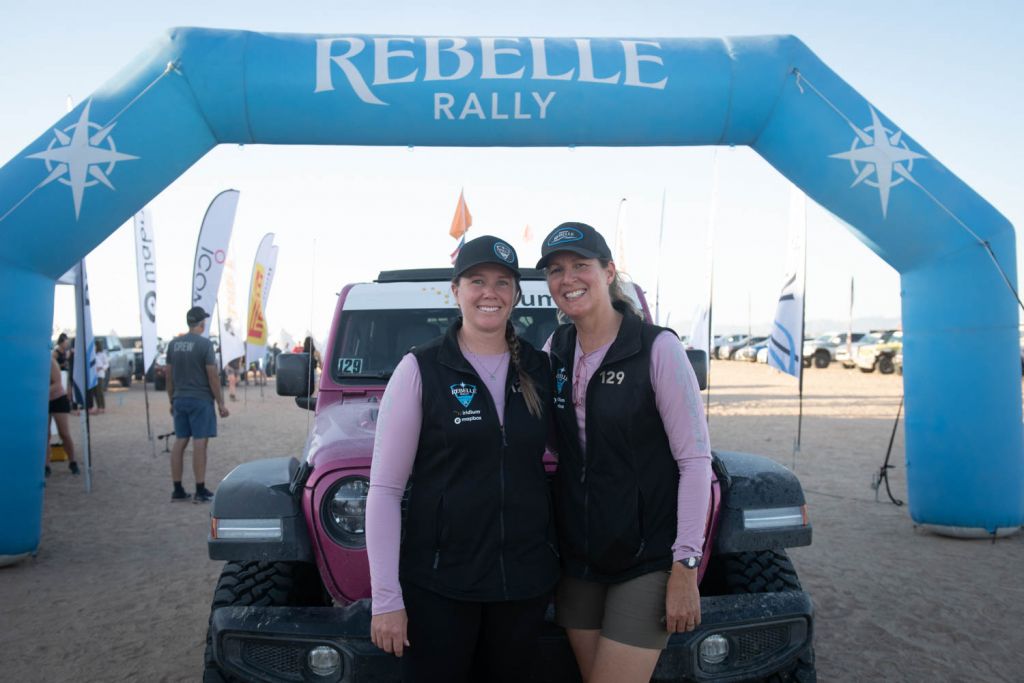 Team #188 Dirt Hustle (Laura Wanlass / Maria Guitar) finished second in the 4×4 Class in their 2021 Jeep Wrangler Rubicon Unlimited and also won the Pirelli Scorpion Tire Challenge contingency program. This program awards the top three Pirelli-equipped finishers with donations toward the registered non-profit of their choice. Laura and Maria will win $1,000 toward Destiny Rescue and in addition, because they were a podium finisher, will win an extra $500 for them to use as desired. The other two Pirelli-equipped finishers were Team #187 Limestone Legends (Lily Macaruso / Alex Anderson) winning $500 to the charity of their choice followed by Team #186 Yellow Yetis (Rosanna Nuch / Nicole Johnson) taking third place with $250 to the charity of their choice.

For the first time in Rebelle history, a Toyota has graced the podium with Team #152 Toyota Way-Finders (Becky Brophy / Samantha Barber) in a 2022 Toyota Tundra. They were the 2021 Rookies of the Year and returned to solidify their place in the Rally. The only modifications the women did to their Tundra were to add a skid plate and swap out their wheels and tires. As a personalization, Toyota also stamped the 2022 Rebelle Rally and Toyota Way-Finders logos into the metal of the truck making the vehicle truly one-of-a-kind.
In the X-Cross™ Class, Team #200 Team Built Wild (Christine Benzie / Melissa Clark) finished first to also take home $5,000 each towards the 2023 Rebelle Rally for their efforts. The duo also took home the X-Cross™ Bone Stock award. This is the third year that the Bronco Sport has been at the top of the podium and continues to dominate the class. Team #216 Wild Grace (Sedona Blinson / Lyn Woodward) and Team #204 MtnSubie (Carey Lando / Angela Lux) battled it out to finish second and third respectively with only 38 points separating them in the final standings. 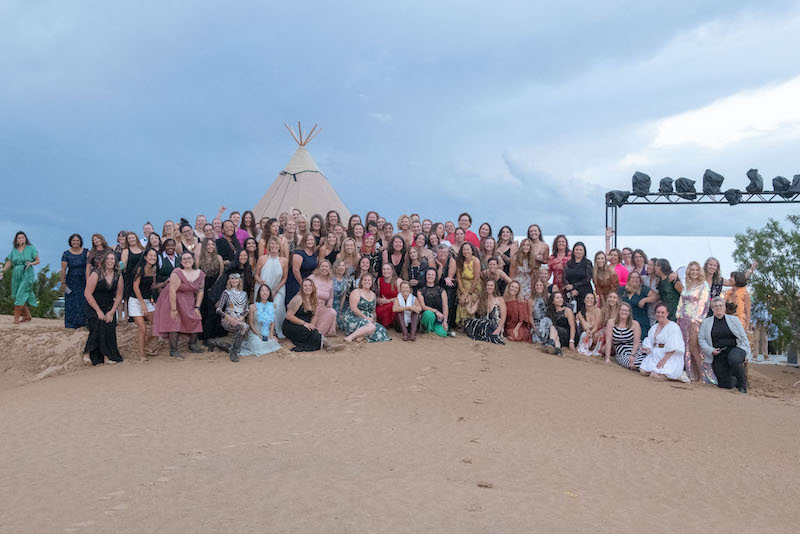 Rochelle Bovee and Melissa Vander Wilt of Team #141 Roaming Wolves were the only entries this year in the 4030 designation, which is specifically for vehicles that are at least 40 years old. Just like in 2020 and 2021, they competed once again in their late father’s 1969 Ford Bronco to honor his legacy.
Team Pawsativity – #144 (Katerina Gardner/Liza Tough) took home the International Cup for 2022, coming all the way from Canada to compete in the Rebelle Rally. Liza Tough has been a part of the winning International Cup team for the past three years. The team will have $2,500 donated to the charity of their choice, with Team Pawsativity choosing the Paws it Forward Dog Rescue Society this year.

Rookie of the Year went to the fourth place team who were contenders throughout the week for a podium finish. They came close but were just edged out by last year’s ROTY. Team #187 Limestone Legends (Lily Macaruso / Alex Anderson) in their Rivian R1T won the title after an impressive showing including winning Stage 4. These team members were selected to compete by the company through a series of trials and training. Both are engineers within Rivian and have deep ties to the outdoor lifestyle, off-roading and camping. 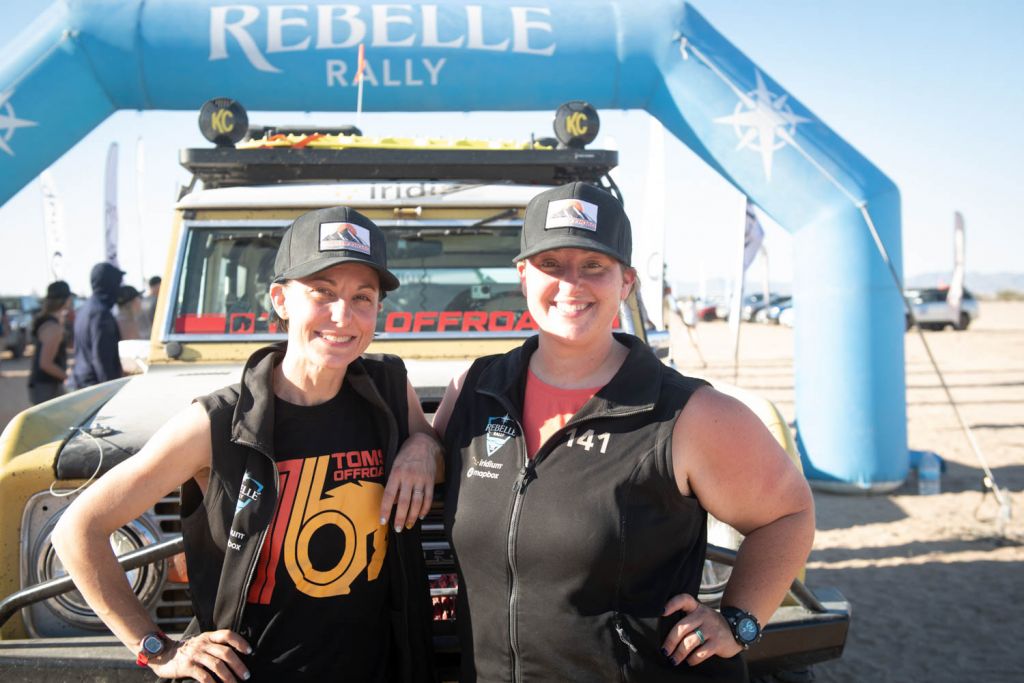 Additional contingency competitions this evening were awarded to the following. The top-scoring team running MAXTRAX received $1,000, this went to Team #129 4xEventures of Nena Barlow and Teralin Petereit who rely on this essential piece of equipment for all their vehicle recovery. MAXTRAX also sponsored its own Team Spirit Award to the team that assisted the most stuck vehicles using MAXTRAX, and that award went to Team #159 Whips & Waypoints (Alex Gilman / Erica Stevens) for helping out numerous teams throughout the dunes and sticky situations. The rookie team running a 2020 Jeep Gladiator may have been new to the Rebelle but knew they needed to help other teams out with whatever obstacles came their way.

Scrubblade also offered up a contingency competition for all teams who were using Scrubblade wipers on their vehicle. X-Cross winning Team #200 Built Wild (Christine Benzie / Melissa Clark) lead this award by earning $1,000 to their non-profit, The Youth Garden Project in Moab. Rounding out the X-Cross Scrubblade contest was 2nd place Team #204 MtnSubie (Carey Lando / Angela Lux) with $500 to their charity and 3rd place to Team #203 Baby Bronco (Karisa Haydon / Trista Smith) with $250 to their charity. For the 4×4, Scrubblade’s top winner was Team #188 Dirt Hustle (Laura Wanlass / Maria Guitar) with their $1,000 award going to their non-profit, Destiny Rescue. The remaining 4×4 Scrubblade contest winners were for 2nd place Team #152 Toyota Way-Finders (Becky Brophy / Samatha Barber) with $500 for their charity and 3rd place Team #154 CHAOS (Rene Vento / Rory Lewis) with $250 to their charity. 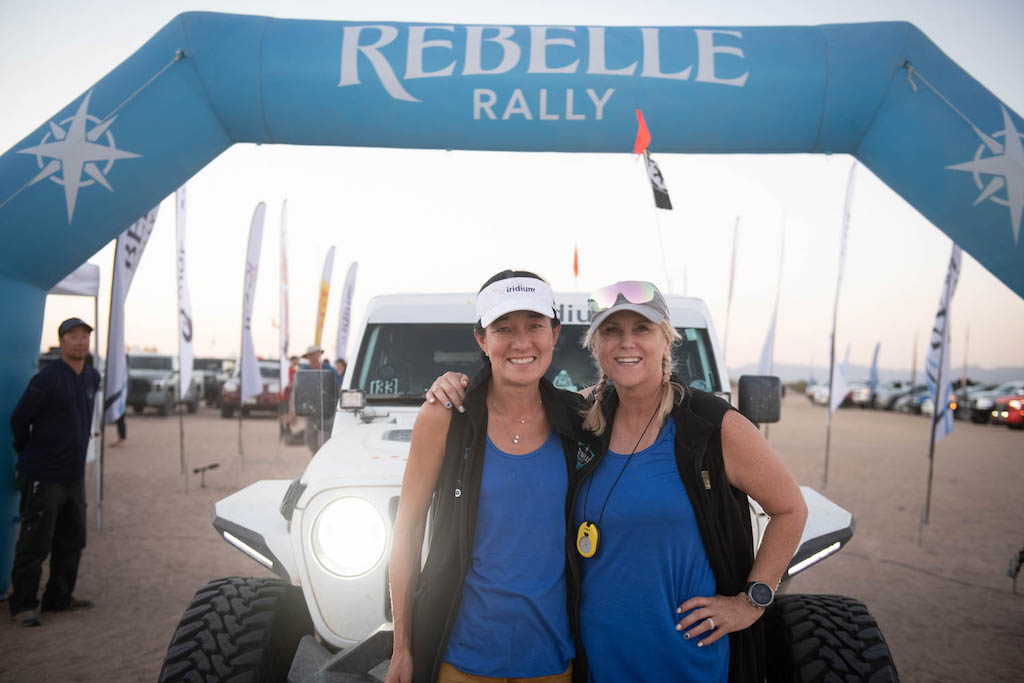 The final award of the evening was the Team Spirit Award, presented by Rebelle Impact. Voted on by the competitors and course staff, this year the prize went to Team #133 Stormtrooper (Suzi McBride / Heidi Dillard) who won the award after numerous stories of support and inspiration submitted by their fellow Rebelles. The Team Spirit Award winner receives $5,000 in their name to the charity of their choice, with Team #133 choosing Girls Who Code as the recipient.

After 2,320 grueling kilometers, Rebelle Founder Emily Miller left the competitors and guests with a few thoughts about their new life post-Rebelle. “The world is more distracted these days, relationships are more separated. You have to make an effort to be present,” said Miller. “Take what you’ve learned from the Rebelle, put the phone down and look up. Enjoy every sunrise and enjoy every sunset.”