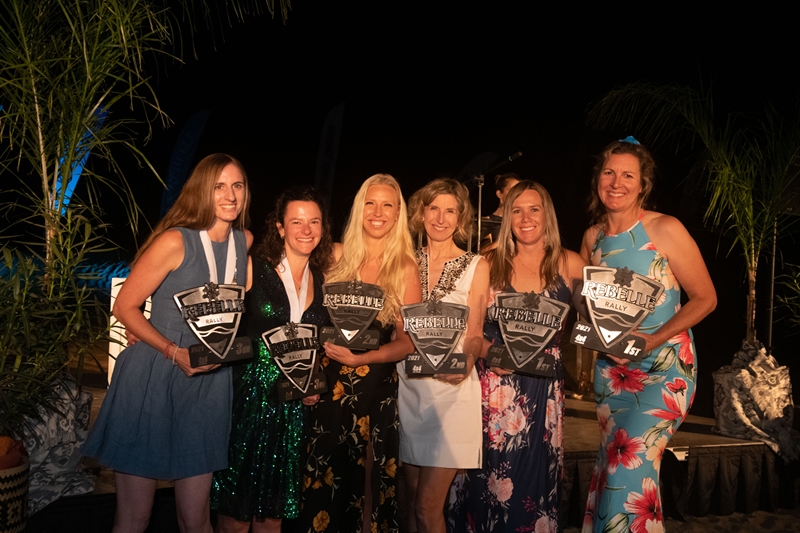 October 17, 2021
Rebelles spent Saturday relaxing in the Imperial Sand Dunes (Glamis) following completion of the sixth edition of the annual Rebelle Rally. Instead of being woken at 5:00 AM by Rebelle Founder Emily Miller’s infamous cow bell, the competitors slept in before being treated to a breakfast of chilaquiles and eggs benedict from Michelin star chef Drew Deckman and his talented staff. With their appetites satiated, the teams took part in a Driver Challenge and a series of games conducted by Fuel Tech Brian Busby called the “Busby Games.” The Busby Games consisted of a bracket style, single elimination competition consisting of bocce ball and corn hole with prizes from Yeti, Wagan Tech, Big Agnes, and Scrubblade up for grabs. Technical Director Chris Woo directed the Driver Challenge, which required Rebelle navigators to drive backwards through an obstacle course while their driver provided instructions. Team #219 Wunder On (Kaitlin Mason / Renée Vento) posted the fastest time in the driver challenge in their Porsche Cayenne, while Kathleen Salvo of Team #122 Prosciutto Babes and Alicia Trigeiro of Team #117 Rescue Ranger won the Busby Games. 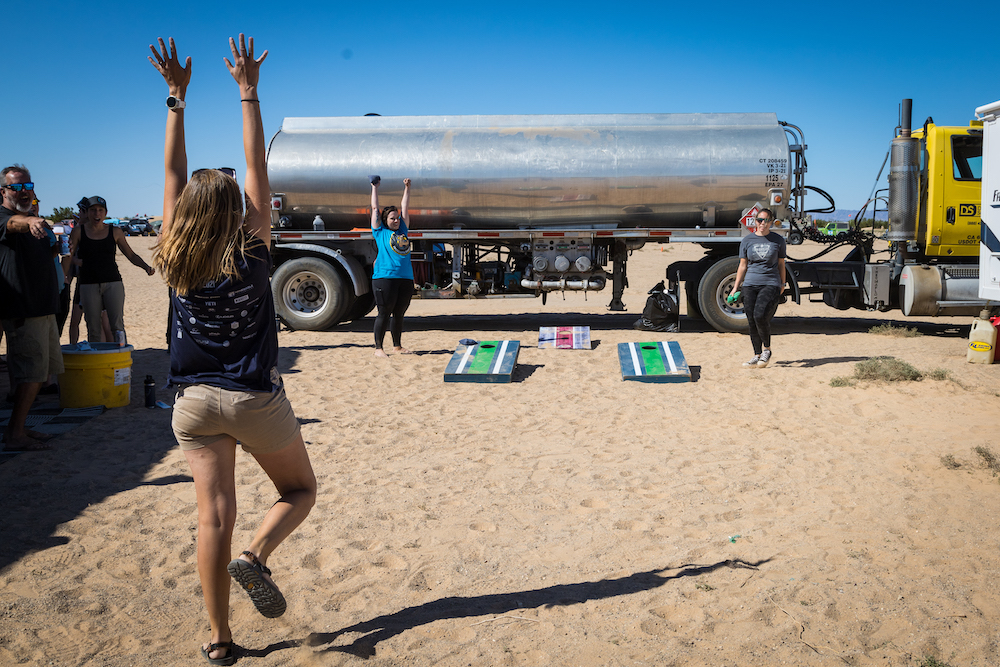 Team #129 4xEventures (Nena Barlow / Teralin Petereit) won the 4×4 Class in their Jeep Wrangler Rubicon 4xe, earning a custom trophy and free entry for next year’s Rebelle Rally as their prize. They also were the top placing team in both the Bone Stock and Electrified designations. The overall winners have driven Bone Stock vehicles in the past, but this was the first time an Electrified vehicle has taken the overall victory. Electrified is a special designation that was started in 2020 for EVs, hybrids, and PHEVs that are charged during the rally via hydrogen power supplied by Renewable Innovations’ Mobile Energy Command. Bone Stock, as the name implies, requires vehicles to be exactly as delivered from the manufacturer, with the only allowance for factory sized aftermarket tires and wheels. Team #177 Jeep Thrills (Emily Benzie / Christine Benzie) finished second in the 4×4 Class in their own Jeep Wrangler Rubicon 4xe, and the podium was rounded out by Team #188 Dirt Hustle (Laura Wanlass / Maria Guitar) in a diesel Jeep Wrangler Rubicon, making for an all-Jeep podium. 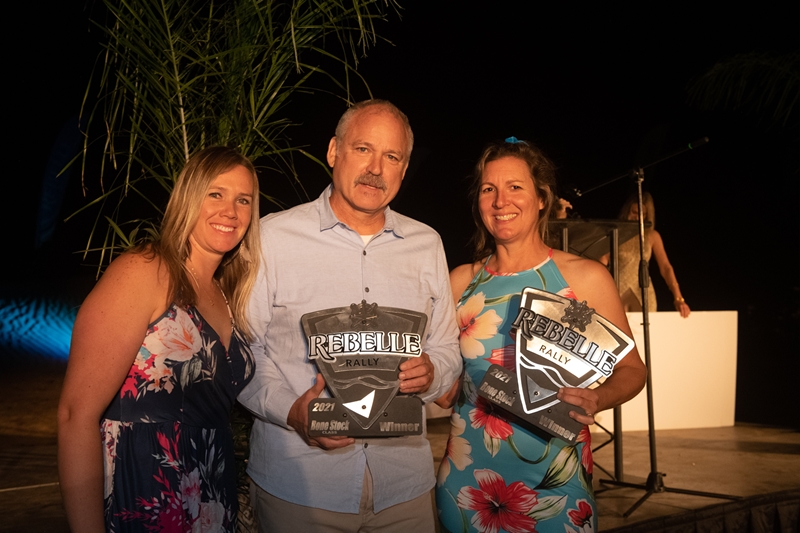 Rochelle Bovee and Melissa Vander Wilt of Team #141 Roaming Wolves were the only entries this year in the 4030 designation, which is specifically for vehicles that are at least 40 years old. Just like in 2020, they competed once again in their late father’s 1969 Ford Bronco to honor his legacy. Team CanToy Divas – #144 (Sue Chapin/Liza Tough) took home the International Cup for the second year in a row after coming all the way from Canada to compete in the Rebelle Rally. Winners of the International Cup have $2,500 donated to the charity of their choice, with the CanToy Divas choosing the Kelowna Women’s Shelter this year. The Kelowna Women’s Shelter provides individualized domestic abuse support, domestic abuse education, shelter, and basic needs including food and personal items, to women and children leaving abuse and violence. 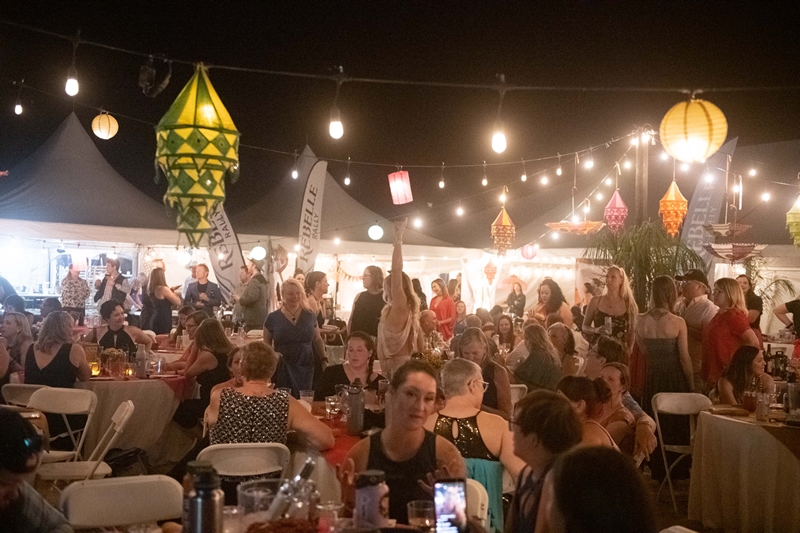 The only rookies who finished in the top ten in the 4×4 Class were Team #152 Toyota Way-Finders (Samantha Barber / Becky Brophy). The two engineers from Toyota’s Production Engineering division piloted their 2021 Toyota “She-Quoia” TRD Pro to a ninth-place finish overall. Brophy grew up in Northern Kentucky and graduated from University of Kentucky with degrees in Electrical and Computer Engineering. Barber earned her Bachelor of Science in Motorsports Engineering and Mechanical Engineering from IUPUI and has Baja racing experience on her resume.

The evening ended with a six-course meal by Drew Deckman and his staff delighting competitors’ taste buds with Baja oysters, fresh sashimi, rabbit, goat, and more during the award ceremony, presented by Jeep. The final award of the event was the Team Spirit Award, co-presented by Rebelle Impact and Jackie Hickman of Rebelle partner Scrubblade. Voted on by the competitors and course staff, this year the prize went to Team #145 Fast n’ Curious (Kristian Vockler / Andrea Shaffer) who battled electrical issues all week long but never let it dampen their spirits, or their ability to reach checkpoints (CPs). This year there were 17 team nominations for the award, more than any previous year and signaling the great sense of camaraderie in this year’s edition. The Team Spirit Award winner receives $5,000 in their name to the charity of their choice, with Team #145 choosing Record the Journey as the recipient. Record the Journey provides outdoor photography adventures to military veterans and their families. Participants capture moments that inspire them and share their images and unique stories. The goal is to help their service members process who they were as a person before they left, with who they are as a returning veteran. 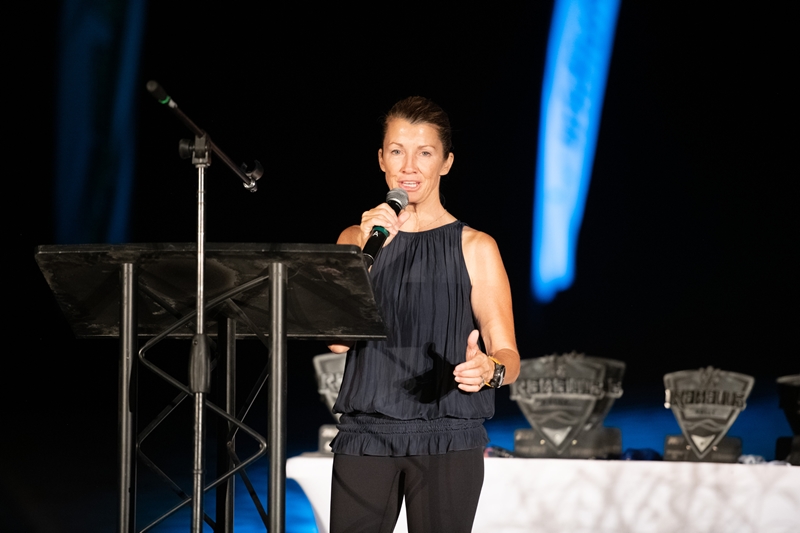 Rebelle Founder Emily Miller gave an inspiring speech reminding all of the women in the room that change is inevitable, but progress is not. “Progress takes concerted efforts to fall forward with passion,” Miller explained. “Success is hard, but failure is hard too, you choose your hard.” After covering over 2,275 grueling kilometers of competition and triumphing over a sandstorm in the middle of the rally, it was clear that these women had chosen which hard was for them. Emily Miller continues to distinguish the Rebelle Rally as not only a world-class competition that is the longest navigation rally in the United States, but also a force for good in local communities and the larger global community as well.

About the Rebelle Rally

The Rebelle Rally is the longest competitive off-road rally in the United States. Traversing over 2,500 kilometers through Nevada and California’s iconic terrain, it is an endurance competition for women consisting of precision driving and navigating – not fastest speed. The competition is innovative and unique, using maps, compass, roadbooks and strategy – known as Rebelle Format. GPS and other electronic devices are strictly prohibited. Remote and off-grid for eight competition days, the Rebelle Rally is considered a providing ground for people, products and stock manufacturer vehicles.
To learn more, visit rebellerally.com
CODE MexLog 300 Highlights! Previous post
2021 Rebelle Rally Recap Next post