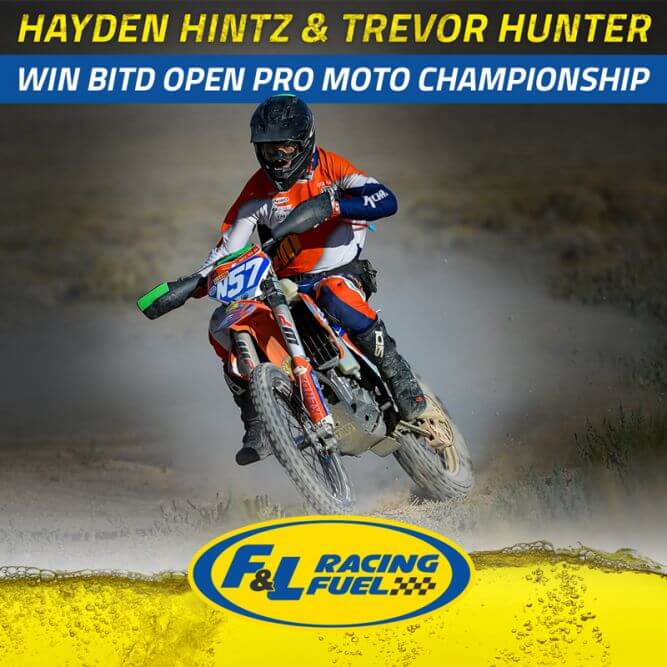 Powered by F&L Racing Fuels fast burn SP-3, the #N57 team earned 4 podiums, including 1 win at the National Desert Cup and a 2nd place finish at the BlueWater Desert Challenge season finale. Hayden & Hunter’s 2020 Best In The Desert Championship adds to a long list of winners from all racing disciplines who rely on F&L Racing Fuels to achieve top performance and high accolades. Trusted by engine builders in the world’s most demanding motorsports, F&L Racing Fuel has been there and won that!

“We want to congratulate Hayden / Trevor and the entire team on their BITD Championship!  As a longtime customer, it is gratifying to see Hayden and his team’s growth and success in 2020.  It shows what you can accomplish with dedication and hard work! F&L looks forward to supporting Hayden on an even more successful campaign for Team Hintz in 2021.” – Matt Cullen / President – F&L Racing Fuels

“The Best In The Desert Championship, and the Open Pro class, in particular, is one of the hardest championships to earn in American Off-Road racing. Spanning five events and over 20 hours of physical race time, the series lends itself to failures and mistakes, but we were able to limit the lows and rebound quickly. We started the year off on a brand new bike with less than an hour of break-in time before heading to the Parker 250, the season opener. Our riding suffered as a result, though we still managed a podium and gained valuable championship points. From there, we rode better and better as a team. We overcame some small but significant mechanical problems at every race before culminating with an Open Pro class win at the National Desert Cup and solidifying our points lead with one race left. At the series finale, we posted the fastest time on Day 2 of racing to finish 2nd O/A on the weekend and wrap up the Open Pro Championship, the Adventure Series Championship, and the Maxxis Triple Crown Championship. Thank you to everyone involved for putting this one together, especially KTM, 3 Brothers Racing, Kenda Tires, Klim Motorcycle, and F&L Racing Fuels. We could not have done it without them.” – Hayden Hintz, BITD #N57 Open Pro

“Coming into the final round of the Best In The Desert championship, Hayden Hintz and I held the points lead but still needed to have a good ride to secure the Open Pro championship. We finished 2nd overall on the weekend. We were successful in winning the Open Pro Championship, the mini Adventure Series Championship, and the Maxxis Triple Crown Championship, which netted us an extra $3,500 cash award. By finishing 2nd this weekend, we lost out on an extra $2,500 in prize money, but we aren’t complaining too much! Now, we look forward to finishing out the GP season and will head into 2021 with hopes of defending the N1 plate!” – Trevor Hunter, BITD #N57 Open Pro

One of the ingredients to the core performance of Hayden Hintz and the #N57 is F&L’s SP-3 Racing Fuel. This fast burn formulation is specially designed for today’s sophisticated race engines such as the KTM 450 XC-F 4 stroke engine and is proven to increase horsepower up to 15%.

Founded in 1978, on the principles of Quality, Integrity and Performance, F&L Racing Fuel is committed to providing customers with the best performance racing fuel possible. With firm roots established in off-road racing, F&L Racing Fuel has been in the tanks of many winners of the SCORE’s Baja 1000 & Baja 500, BITD’s Vegas to Reno, Nevada 1000, Parker 425, and many more.

About F&L Racing FuelWe fuel everyone from professional race teams, high performance motorsports enthusiasts and weekend warriors! On-road, off-road, four-wheels or two-wheels, on the water or the snow, on the track or racing your buddy on the weekend, we have the right performance racing fuel for all your motorsports needs! F&L Racing Fuel is dedicated to providing you with a high quality, trusted, performance product!