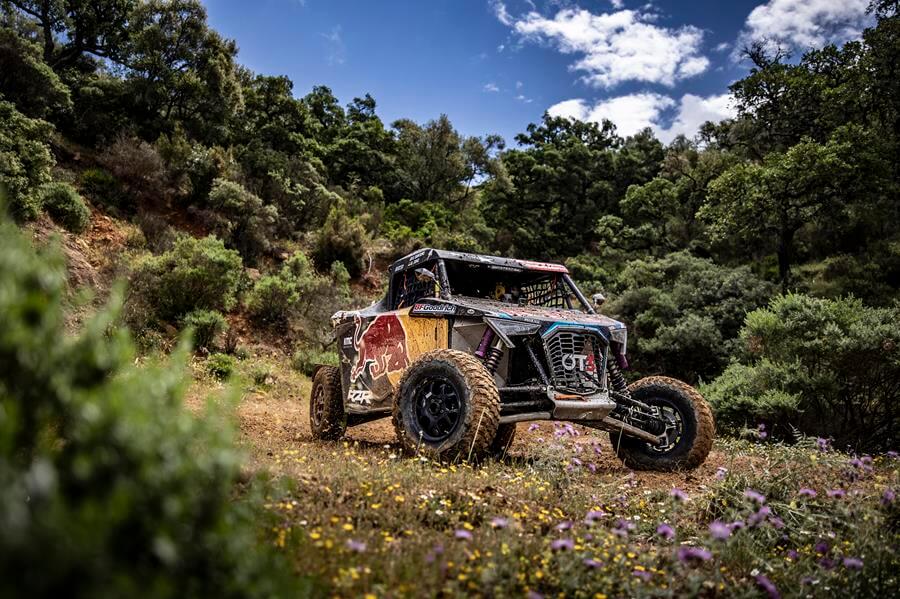 The Red Bull Off-Road Junior Team are back in action this week after rewriting the record books at the Dakar Rally earlier in the year. Rally Andalucia is the first-ever race to have FOUR Junior Team crews entered and expectations are high that they can build on their impressive performance in Saudi Arabia.

This January saw the Junior Team claim Dakar records including the youngest ever stage winner and the first female stage winner since the rally left Africa. At last year’s inaugural Rally Andalucia the young team took a stage win and secured two spots in the Top 4 of the side-by-side category. Now the enlarged squad returns to chase more glory in southern Spain, May 12-16.

The four crews at the controls of the team’s custom built OT3 machine at this week’s Rally Andalucia are; Seth Quintero (USA) / Dennis Zenz (GER), Cristina Gutiérrez (ESP) / Francois Cazalet (FRA), Mitch Guthrie Jr. (USA) / Ola Floene (NOR) plus new additions Guillaume de Mevius (BEL) / Tom Colsoul (BEL).
26-year-old Guillaume de Mevius joins the team after strong results in the T3 category at last year’s Baja Portalegre as well as both Hail Bajas. The Belgian also has experience in the WRC and will be linking up with his countryman Tom Colsoul.

“Joining the Red Bull Off-Road Junior Team is a massive opportunity for me.” – Guillaume de Mevius

Although De Mevius will be making his debut for the Junior Team this week he will feel right at home. The all Belgian crew will be racing the Belgian built OT3 by Overdrive as they look to secure success for their nation.
Before he was old enough to hold a driver’s licence Seth Quintero had already won pretty much all the off-road races there are to win in the United States. Still only 18 years old, Quintero holds the record of the Dakar’s youngest stage winner. Now the young American returns to Andalucia, where he made his rally-raid debut last year.

Alongside co-driver Dennis Zenz, Quintero briefly led the side-by-side category at the Dakar earlier this year. An overall win is due one day soon for the pair and that win could happen in Spain this week.

“The team scored a podium last time we were here and we’ll be pushing to get the win this time.” – Seth Quintero

29-year-old Cristina Gutiérrez produced one of the standout moments of the 2021 Dakar. On the opening day of the rally she became the first female stage winner since Jutta Kleinschmidt’s last stage win in 2005. It was another sign that the Red Bull Off-Road Junior Team and their OT3 could hold their own against anyone.

“In Andalucia I want to carry on learning about our OT3 car and building understanding with the team.” – Cristina Gutiérrez

Gutiérrez now comes home to Spain to race Rally Andalucia after securing a podium at the inaugural Extreme E race last month alongside Sébastien Loeb. Frenchman Francois Cazalet will be reading the roadbook for Gutiérrez in Andalucia.

Mitch Guthrie Jr. has driven two editions of the Dakar as part of the Junior Team and now the 24-year-old is looking forward to competing in his first full FIA World Cup for Cross-Country Rallies. Just like his team-mate Quintero, Guthrie Jr. has a long and impressive list of wins at races in the States. Now the Californian is focused on adding international honours to his resume.

Co-driving for Guthrie Jr. in Spain will be Norway’s Ola Floene, the same combination that took third place overall in the side-by-side category of Rally Andalucia last year.

“This year the sky is the limit and the whole team is coming in swinging.” – Mitch Guthrie Jr.

The racing in Spain starts on Wednesday, May 12 with a short prologue stage. Then comes four long days covering 1,200 kilometres of challenging off-road routes around the Andalusian town of Villamartín. The chequered flag will fall on Sunday, May 16.

Rally Andalucia is round one of the seven round 2021 FIA World Cup for Cross-Country Rallies. The Red Bull Off-Road Junior Team are targeting overall World Cup glory as well as race wins over the course of the season.