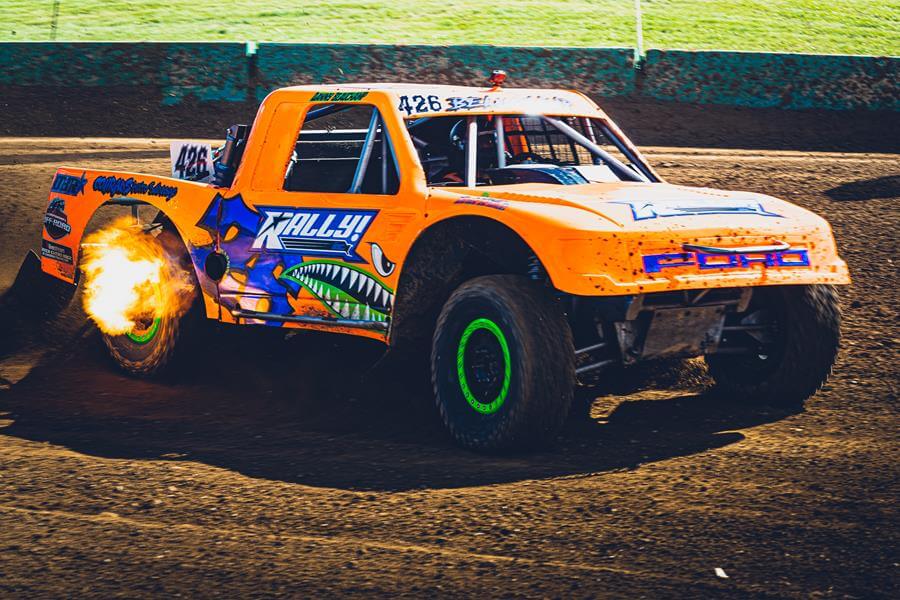 Friday Night Thunder Opens Up Racing at the Big House

Crandon, Wis. ~ Racing in Crandon is finally underway in 2020. After a postponement of the annual June event at the famed Big House, Championship Off Road opened up the 51st year of racing at Crandon International Raceway with Friday Night Thunder, a full evening of sportsman racing that filled the hillside and showcased the heart and soul of off-road, short course racing in the Midwest.

After the annual trip to downtown Crandon for a full morning of festivities, teams headed back to the racetrack for a complete day of sportsman racing. Season long battles intensified on Friday night as several drivers were able to tighten the championship gap.

Dale Chestnut took home the win in Classix, besting Ronald Kosciesza by 6.828 seconds. The moved helped close the gap on Aaron Kontizer, with just one point now separating the two heading into Saturday. Statezny worked his way around Konitzer on lap four to finish in the final podium spot.

Danny Beauchamp made it seven for seven in Formula 4X4 wins on Friday night. Codie Sommers kept pace and his second place finish allowed him to inch closer to Randy Schaitel in the points race for second overall. John Holtz found the final podium spot in just his first race of 2020.

Hunter VanZile grabbed the lead on lap four and was able to hold off Andy Johnson for his third win of the season. Johnson was able to open up his season points lead over Ava Lawrence. Early race leader David Krause finished third.

It looks like it will take a full season of racing to figure out the best driver in the ultra-competitive Super Stock Truck class, with five drivers within striking distance of the top spot. The class has been extremely competitive all season, long and the dripped over into the series’ first stop in Crandon.

Nick Visser has been tough to beat when he has a lead, and the veteran got the drop on the field coming out of turn one on Friday night. Visser lead from start-to-finish for his fourth straight win.

Ben Holtger did everything he could to try and catch Visser, coming from fourth on the first lap to finish second. Point’s leader Kyle Cooper held of Nick Byng after a last lap battle for the final podium spot.

Cooper’s lead is just two points ahead of Joe Maciosek, who finished fifth. Holtger is now tied with Visser for third overall, four points behind Cooper. Byng is fifth, just 20 points away from the top spot.

It was win number four on the season for Carson Greco on Friday night.  Greco grabbed the lead over Kody Krantz on lap three, and then held Krantz off at the line to pick up the win. Raymond Deininger finished third.

Sam Marquardt went wire-to-wire for his sixth Mod Kart win this season. He was able to extend his lead over Easton Sleaper, who had a mid-race incident that pushed him to the back of the back. Chase Moeller and Michael Funk battled it out over the past three laps for the final two spots

The top three in the Stock Truck class kept it a uniformed podium as points leader Collin Wichman notched his first win of the season.  Diesel Shanak kept pushing through the eight lap race to finish second ahead of Travis Peterson. Wichman, Shanak and Peterson sit 1-2-3 overall.

John Fitzgerald had his work cut out for him in the competitive 1600 Single Buggy race on Friday. Fitzgerald started seventh but quickly picked his way to the leaders by mid-race. He was able to get past Travis Trelstad on lap six, ran the fastest lap of the race on lap seven to score his second win of the year.

Trelstad finished strong second, with Luke Allcox coming across ahead of Dylan Parsons for third. Points leader Billy Buth had a tough race, leaving the circuit on lap four after leading one lap earlier. His 13th place finish, along with Fitzgerald’s win tightened the overall points lead, with Buth now leading by just two points.

Everyone wants to race at Crandon, and the Pro Buggy class increased thanks to a number of drivers making their 2020 Champ Off Road debut. One of those making laps for the first time this year was Michael Meister, who worked from a third place starting spot to a dominant win by more than nine-seconds over West Coast driver Brady Whitlock.

Whitlock had an intense battle for second with JD Koran and Ryan Schwalbe. Koran just missed the second rung by .9-seconds, with Schwalbe less than .3-of-a-second behind Koran in fourth. Points leader Michael Hester finished fifth.

The 450 Mod Karts are always a face-paced, action packed show on the big track at Crandon. Bronsen Chiaramonte led from start-to-finish, setting a blistering pace early on for the win.  Braden Chiaramonte worked his way up from fourth to finish second ahead of Jaden Uribe and Ethan Ebert.

Mike LeTourneau picked up the lead on lap won and led wire-to-wire for his first win of the season. LeTourneau held off all comers in the deep Sportsman SxS race, besting Tim Christiansen at the line by .5-of-a-second. Two-time race winner Jonny Hentges was less than a half-second behind Christiansen in third.

Thirty-two Light Buggies lined up for Friday Night Thunder, and when the dust settled it was Colin Schulz sitting on the top spot of the podium. Schulz grabbed the lead on the first lap and never relented, holding off Connor Schulz for his third win of the season. Veteran Greg Stingle maneuvered through thick traffic to round out the podium.

Tyson Marquardt nudged ahead of Billy Buth for fourth, and in doing so created a tie with Buth for the overall points lead.

Saturday will continue to showcase the spectacular racing that Crandon has been known for over the past 51 years. Along with the sportsman, fans will get to see the best professional off-road drivers in the world go head-to-head on the big track. Championship Off Road will live stream the entire day of action on its website, www.champoffroad.com.