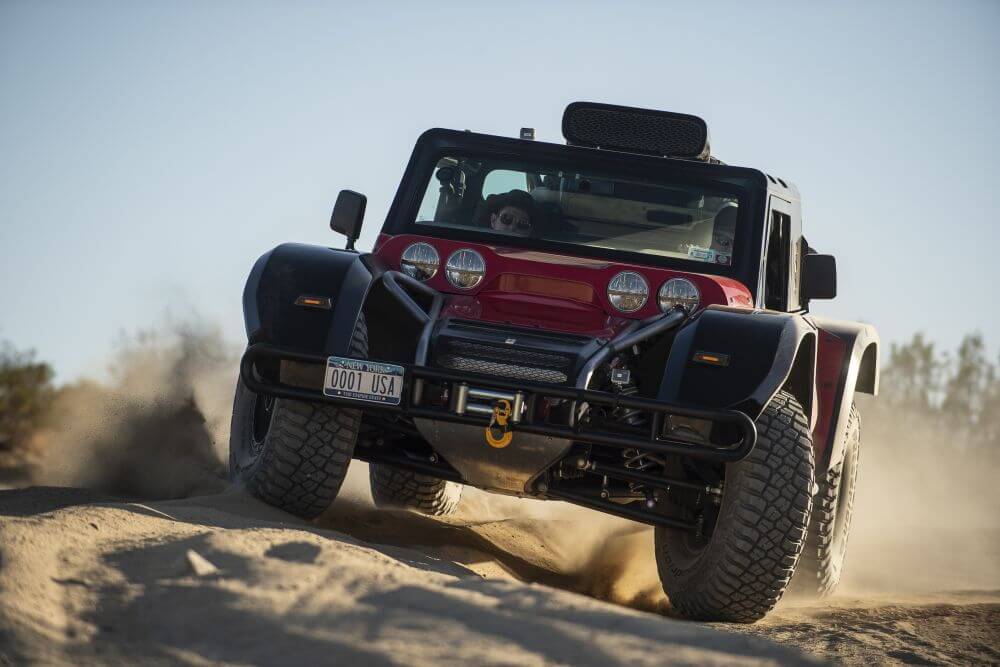 If you are not familiar with the original “Baja Boot” let us help to refresh you. In 1967, the top brass at General Motors decided they wanted to go after Jeep and battle the off-road market.  They soon recruited Vic Hickey, who was at the time most noted for building the Lunar rover that’s currently sitting on the moon.  GM figured, if the guy can build a vehicle to drive on the moon, surely the open Baja desert shouldn’t be an issue, right?  So the process began, and 30 days later the original Baja Boot was born, and would soon be piloted by actor Steve Mcqueen.  Mcqueen took the vehicle to Baja, CA for testing, but was afraid he would be too recognized, so he grew a mustache.  When you are one of the most popular actors in the world a simple mustache probably won’t cut it, and it didn’t. Mcqueen was recognized all around the Baja region, making testing the vehicle quite difficult. Yet the Baja Boot would soon enter several races including the 1969 Baja 1000, in which Mcqueen and co-pilot would battle legendary driver Rod Hall and his infamous Ford Bronco dubbed “The Purgolater”.  Unfortunately Mcqueen would be forced out on race mile 237 due to transmission issues. The vehicle did however win the inaugural Baja 500 earlier that same year, quite an accomplishment nonetheless.

Nearly 50 years later the Baja Boot was purchased at auction 10 years ago by race car builder and enthusiast Jesse Glickenhaus, who by his own admission “Finds the toughest races in the world like the Baja 1000, and The 24 Hours of Nürburgring, and builds cars to compete in them”  Jesse is a car guy through and through, with the love of racing in his blood.  Soon a wild plan was building.  Could it be done again? Could a single one off vehicle inspired by the Baja Boot be built once again to conquer the world famous SCORE International Baja 1000? Glickenhaus soon reached out to SCORE’s race director, known affectionately as Jose G.  Glickenhaus explained his wild plan, reminding him it was done before in ‘69, to which Jose was all too familiar with.  Jose realized quickly the idea could be massive, and put him in contact with accomplished rally car, and off-road champion driver Darren Skitlon.  If there was ever a man to reach out about this idea, and perhaps bring him on as a driver it would be Skilton, who knows Baja like the back of his hand.   After some detailed discussions Glickenhaus and Skilton agreed, it was go time.  They will battle the brutal desert in Baja in an all new Glickenhaus Baja Boot with Skilton and team at the wheel!

In Mid 2015, the drawings, renderings, and engineering began at renowned race car builder Armada Engineering Headquarters in Chatsworth, CA.  Known for their impeccable quality Trophy Trucks, Ultra 4’s, Class 10’s, and prerunners Armada was the only choice for this team.

After nearly 6 months of engineering was complete, the building began.  The technology and engineering this build involved surely wasn’t going to take the 30 days it took to build the original. After a year of building, and 50 years after winning the inaugural Baja 500, the original Baja Boot’s family tree has emerged a brand new 650 horsepower Baja 1000 ready vehicle, racing the same class as it’s predecessor 5 decades before.

After 18 months of designing, and building – So much hard work had come together. the fun part of testing began.

As the team arrived just south of the U.S. border in Ensenada, it’s interesting to point out the Baja Boot would once again go to battle against Ford’s all new Bronco.  The Ford Bronco took a nearly 25 year hiatus, and in 2019 the concept version (that would be released a year later) entered the race.  It was never intended to work out this way, but 50 years later the all new Bronco, would battle the Baja RE-Boot once again, like a prize fight rematch.  None of this was planned, but seemed meant to be.  And so the battle of determination, engineering, machinery and pure will begins, the 2019 Baja 1000 is underway with the Glickenhaus Baja Boot battling the Ford Bronco in class 2.

The green flag had dropped, and the vehicles began storming the desert like soldiers going to battle.  Skilton was first up behind the wheel, and at mile marker 330, he pulled into the pits.  He climbed to let the next driver hop in while the crew did a complete maintenance check, and found nothing at all major that needed to be addressed.  “We just gotta keep pushing!” Skilton proudly said, (covered in fresh Baja dirt) during a short film the crew made at the race. The race continued on with a fresh driver, fuel and tires.  After 1000 miles of brutal desert terrain, and everything Baja could throw at them the team finished.  A typical desert race has an approximately 60% finished rate, with race proven vehicles that is.  To finish with a brand new one off vehicle is nearly unheard of.  Tensions were running a bit high, until they found out where they placed in their class.  They finally got the word they had WON!  They took top dogs in their class!  Unfortunately for their nemesis of 1969, 2019 wasn’t the Bronco’s year. The updated version of the Bronco’s DNF’d but will return to race the Baja 1000 later this year.

Jesse Glickenhous had an idea, then a plan, then put forth that plan. The team was victorious. They had completed and won something very few people ever have. It was a true test for everyone involved. “It was a huge press, and a huge success” – Jesse said.

So you’ve seen what these things can do when tested, and maybe you are looking to have one just like it? The team at Glickenhaus have decided to move forward in producing these and offer the incredible vehicle to be purchased by the public in a 2/4 door option. These will replicate the exact same design and chassis as the 2019 Baja 1000 Class 2 Winner. With slight dimension changes from to 2 to 4 door option.

For more info about Glickehaus, and ordering information visit: HERE