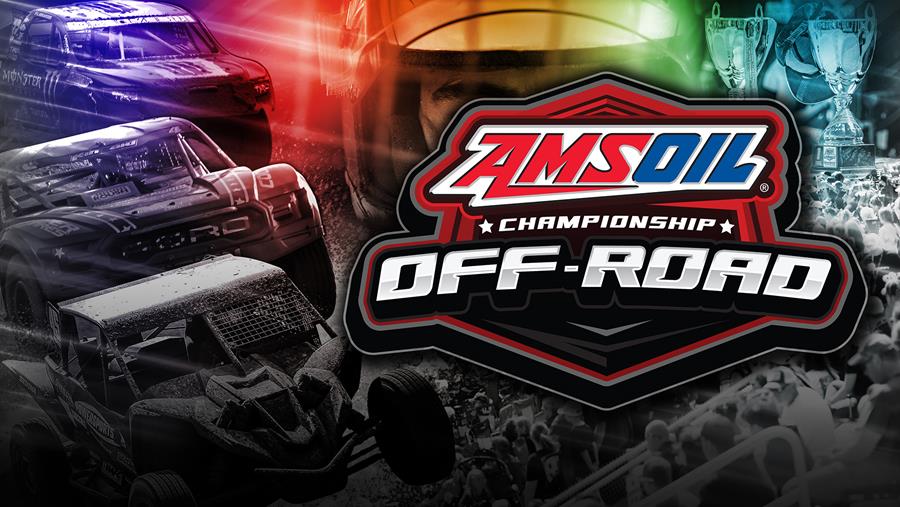 Antigo, Wis. ~ The opening round of AMSOIL Championship Off-Road featured a renewal of rivalries on Saturday. Off-road heavyweights such as CJ Greaves and Kyle LeDuc in Pro 4, wide-open Pro 2 and Pro Lite classes and a large number of come from the back wins set the tone for a spectacular weekend of racing.
Round two on Sunday was just as electric as the best off-road racers in the world put on a world-class show in front of a packed house in Antigo, Wis. 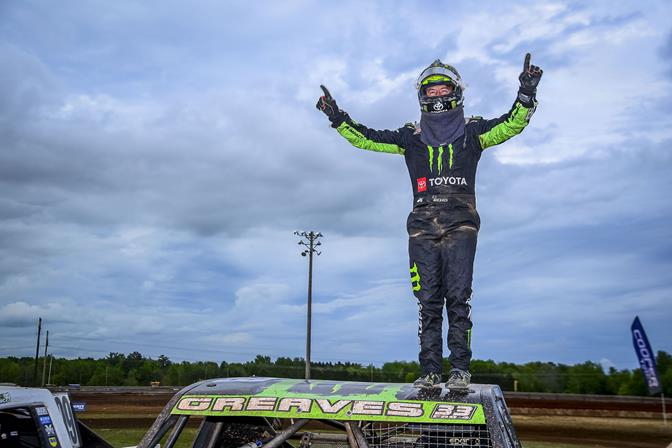 Greaves Gets Weekend Sweep
Sunday’s had the making of a mad dash between two of the best off-road drivers on the planet. CJ Greaves and Kyle LeDuc sat side-by-side on the front row as the power Pro 4’s rumbled towards the start line.
The two blasted off the start and for the next six laps it was a chess game for the lead, with LeDuc holding the slightest of edges each time around the track. But on lap seven, LeDuc tucked into pit row to get a flat tire changed. That left Greaves out front, alone and in the same position as his opening round win on Saturday. Even when LeDuc got back on the lead lap, Greaves held the advantage and motored to the weekend sweep.

“Kyle and I were ready to do battle and we were right there on speed and all of a sudden he got a little loose there and he said he got a flat,” said Greaves. “After that we just worried about doing our race and my dad came on the radio and said, ‘don’t wreck this win trying to chase him down’.”
LeDuc has never quit pushing in a race if he thinks he has a chance. He was able to get the tire changed and worked his way back onto the lead lap. With two laps to go, LeDuc was fourth and the race was restarted after a red flag incident involving Adrian Cenni. LeDuc advanced two spots but couldn’t catch Greaves before time ran out.
Andrew Carlson kept within striking distance throughout the race. A day after flipping his truck and exiting early, Carlson rebounded to keep pace in the points race by finishing third. 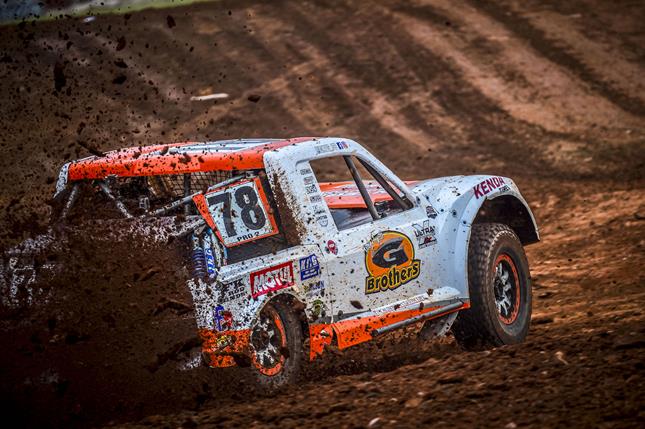 Gutierrez Wins, Takes Points Lead
If the first weekend of racing is any indication, Ricky Gutierrez plans to be in the Pro 2 mix all season long. Gutierrez swapped fiberglass with the leaders on Saturday before finishing fourth. It was a repeat performance on Sunday, but this time with a better outcome.
Kyle Kleiman and Gutierrez led the field into the first turn, but it was Kleiman who held the early lead with Jerett Brooks in tow. But Gutierrez was able to slip past the pair when both spun on the same turn. Brooks would get back into the mix, but he abruptly pulled off with a flat with a minute remaining on the running time. That gave the spot back to Ricky G, who kept a hard-charging Ryan Beat off his bumper for the win, and the early season points lead.

“Coming into here we knew we were going to be a top team,” said Gutierrez. “My crew had been working so hard this offseason and I’m just doing so much testing, getting this truck dialed in. It showed yesterday, but we had some tough luck, but we did a ton of work on the truck and came away with the win.”
Ryan Beat stalked the leaders all race long, never dropping lower than fourth. He was able to find another gear late in the race and did everything in his power to chase down Gutierrez over the last few laps. The runner-up spot was a nice rebound after an early exit on Saturday.
Kleiman held his truck together after a physical day at the office. He followed up his podium finish in the opener with another third on Sunday. Kleiman was the only Pro 2 driver to finish on the podium both days in Antigo. 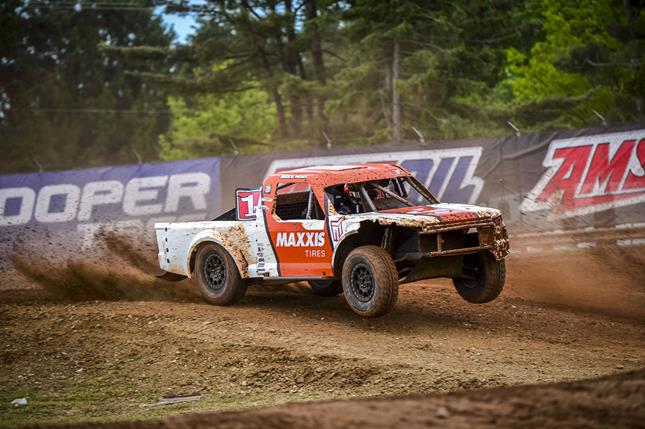 Heger Handles Pro Lite with Weekend Sweep
Brock Heger swept the opening weekend in 2021 on his way to seven wins and the Pro Lite title. Heger had history repeat itself in Antigo this past weekend as the defending champ opened up the 2022 season with a pair of dominating performances.
For the first half of the race, it was a three truck race out front with Kyle Greaves leading the way over Connor Barry and Heger. Barry and Heger were able to get past Greaves after the race leader drifted wide. On lap ten, with just over a minute left on the clock, Heger slipped past Barry and just like the opener, pulled away from the field for the win.

“I knew I had a good truck, I just had to put it all together and make my way up through the field,” said Heger. “We threw some different shock set-ups at it today, so at the beginning it was a little risky just trying to see what it could do. I ended up making the pass on Connor stick and made it out to the front and got some clean air, which was nice.”
Barry would drop back after the Heger pass and Greaves was able to get into the second spot. But Trey Gibbs did Trey Gibbs things for the second straight day, blitzing the rhythm sections to get around Greaves on the final turn to secure the runner-up spot. It was his second podium of the weekend, with Greaves getting on the box in third. 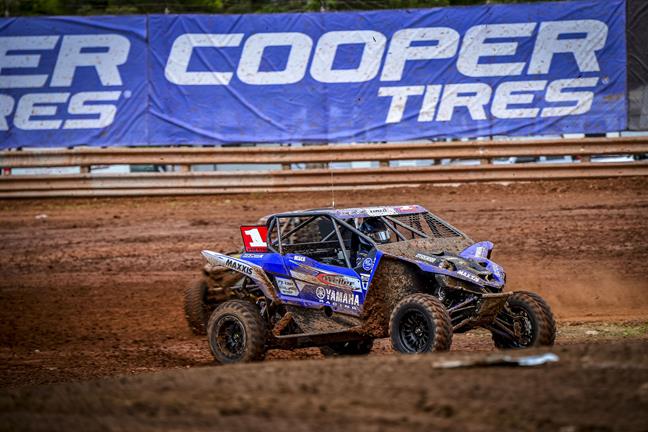 PRO TURBO SXS: On Saturday, it looked like it was going to be the triumphant return of Kyle Chaney to the top of the Pro Turbo SXS class. The former class champion was way out front in round one before having to pull off the track. It was a no-doubter for the Can-AM driver on Sunday.
Chaney led from the start and built up time on his lead over the field lap-after-lap on his way to a near six second win. Just like last season, Chaney overcame a first day struggle to win round two.
It wasn’t until the end of the race that brought clarity to the final two podium positions. Round one winner Rodney VanEperen held down the second place spot behind Chaney, even with CJ Greaves breathing down his neck. It looked like they would fill out the podium, but Greaves pulled off on the final lap and that opened the door for New Zealand’s Hamish Kelsey to make the podium in his Champ debut. 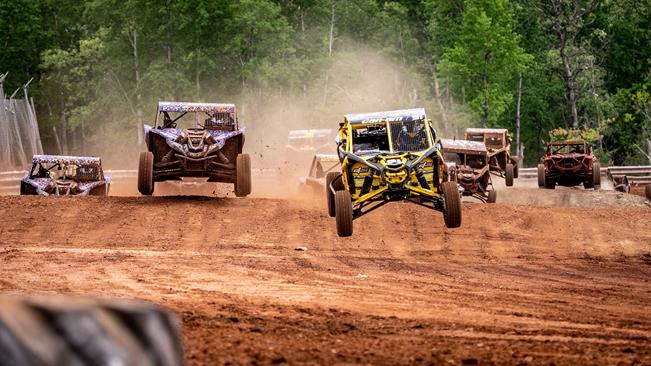 PRO STOCK SXS: The drama left the Pro Stock SXS race right from the get-go. Round one winner Brock Heger got the jump on the field and proved why he put his Yamaha into the winner’s circle eight times in 2021.
Several restarts made things interesting and with two laps to go, CJ Greaves lined up his new Polaris behind Heger. Greaves couldn’t make it around the defending champion, settling in for his second runner-up finish on the weekend. Owen VanEperen worked his way through traffic to position his Yamaha in the third spot of the podium. 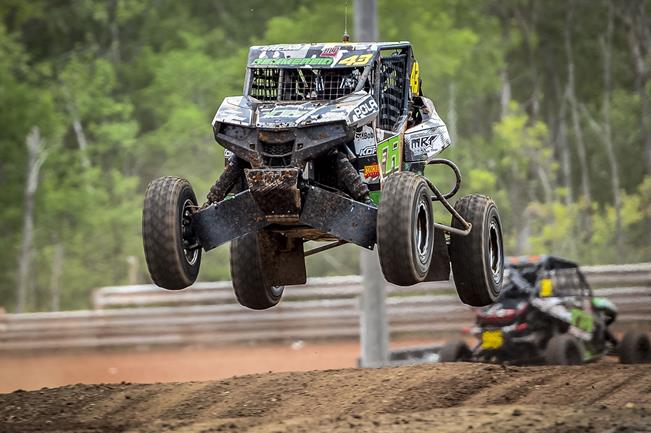 PRO SPEC: Gray Leadbetter took the opening round Pro Spec win on Saturday, but it was the Nick Visser show on Sunday.
Leadbetter led the field for the first five laps, but Visser got around after that and powered the spec-built truck to his first career Pro truck victory. Leadbetter kept Visser honest, finishing in second. Chris Van Den Elzen rounded out the podium in third.

SPORTSMAN SUNDAY
PRO AM SXS: It was Tyler Remmereid’s Pro AM SXS race to win on Sunday, and he had to continuously battle back to earn it. Remmereid led three separate times before pulling away over the final two laps. Colin Kernz held off Sunday’s race winner Logan Christensen for second.

SUPER BUGGY: After finishing in a close third in Super Buggy on Saturday, Mark Steinhardt took home an extremely close win on Sunday. Steinhardt led from the flag drop but finished just .122 of a second ahead of Michael Hester. Round one winner Michael Meister was also in striking distance for the win, finishing just a second behind Hester in third.

1600 LIGHT BUGGY: After winning four races in 2021, Connor Schulz found the winner’s circle for the first time this season on Sunday. Schulz got out in front of the field on the second lap and remained there for the duration. Last season’s champion, and Connor’s brother, Colin Schulz finished second. Joe Jorgensen rounded out the podium.

SHORT COURSE KARTS: Reed LeDuc led for the first six laps before Finley Holtger found the right line and mashed the throttle to his second Short Course Kart win of the weekend. LeDuc would stay close before finishing second Carter Zahara was third for the second day in a row.

STOCK TRUCK: Cory Holtger was quick all race on Sunday, and after taking the lead on lap five, he motored to his first win, and the early points lead, in Stock Truck. Saturday winner Brian Peot crossed the line in second, narrowly beating Troy Ringelsetter at the finish.

170 SXS: Ashton Dreher went wire-to-wire in the 170 SXS race to pick up his first podium of the season. Saturday’s winning driver Wyatt Olson just missed his second straight win, finishing .05 of a second behind Dreher. Greyson Arneson finished third for the second time this weekend.

570 SXS: Ethan Dressel worked his way through traffic after starting fifth to win the 570 SXS race on Sunday. Round one winner Chase Braun led late before finishing second. Ellah Holtger picked up her second podium of the year in third.

1600 SINGLE BUGGY: It took far less time on Sunday than it did on Saturday for John Fitzgerald to put his 1600 Single Buggy into a winning position. Fitz moved into the lead and never looked back on his way to the weekend sweep. Dylan Parsons finished second to Fitzgerald for the second straight day. Tony Keepers hit the podium for the first time in 2022 by finishing in third.

SUPER STOCK TRUCK: Joey Maciosek looked prime for a weekend sweep, but Ben Holtger spoiled the party late in Sunday’s Super Stock Truck final. The defending champ Maciosek led for nine laps before Holtger got around him and into a lead he wouldn’t relinquish. Maciosek would finish second to keep the points lead with Kyle Cooper finishing in third.

SPORTSMAN SXS: Matt Vanderheyden flipped the script on a disappointing opening round by taking the win in Sportsman SXS on Sunday. Sam Brazee led for a majority of the race before Vanderheyden was able to grab the lead on the final lap. Brazee would cross the line in second and Dustin DeGrand finished in the third position.

MOD KART: It was the Porter Inglese show in Mod Kart’s in Antigo as the Felch, Mich. native won for the second time this season. Chase Moeller set the quickest lap time on his way to second and Hunter VanZile notched his first podium of the year in third.

The AMSOIL Championship Off-Road series heads to Crandon International Raceway for two rounds of racing on June 25-26. Each race weekend features PRO Truck classes, various sportsman classes including open-wheel buggies and both sportsman and PRO side-by-side classes. Every round of racing is aired via live stream exclusively on FloRacing.com.