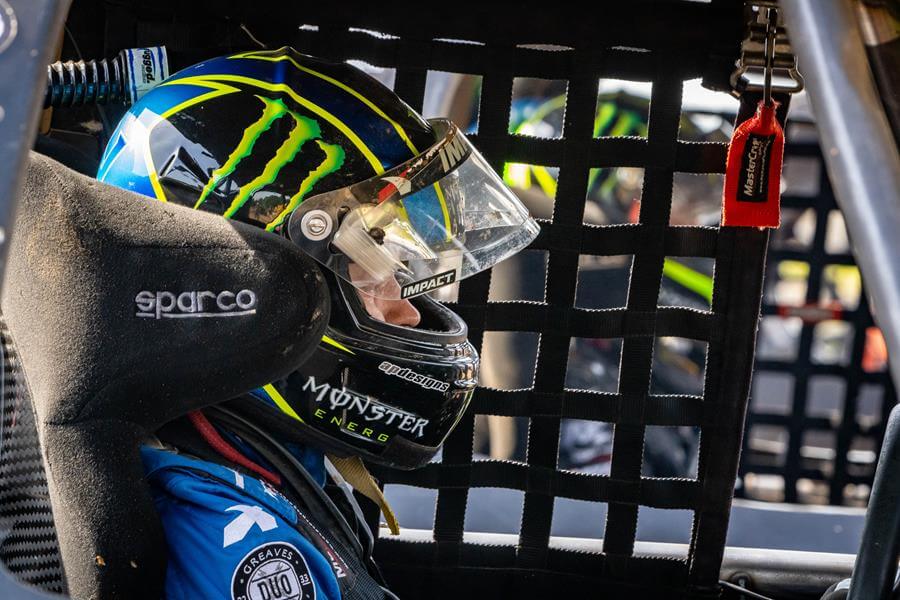 Lena, Wis. ~ Just two weeks after opening the 2020 season, Championship Off Road headed east to Wisconsin, where it was greeted by a tight, twisting track carved into the countryside of Lena, a small town just north of Green Bay.

In just a few years, the Dirt City Motorplex has become a favorite of many sportsman and side-by-side racers but had never hosted the bigger and faster pro classes. After one full day of racing, Dirt City proved it was worth the accolades, offering up a fast track that tested a drivers patience and their vehicles ability to maintain.

Kyle LeDuc came to Championship Off Road this season with a great amount of fanfare. His championships out west, nearly 100 career wins and cup wins at Crandon put him at, or near, the top of any list debating who’s the best off-road driver in the sport today.

CJ Greaves is also on that list. Greaves has been the best driver in the Midwest the past few seasons and was less than excited that LeDuc came into his realm on a winning note by taking the first two rounds at ERX Motor Park two weeks ago.

LeDuc was the top qualifier on Saturday, and after drawing a zero for the invert, he was once again on the front row for the start of the main event. Next to him was Adrian Cenni, who got the jump on the green flag and led the field around the first lap. LeDuc would need much of that first lap to real the Wildman in, but he grabbed control of the race before the field reached the finish line.

In tow was CJ Greaves, who entered the year with a new truck and admitted that they were still working through some things at ERX. But even with LeDuc leading, it was obvious that Greaves had figured quite a bit out and was constantly pressuring LeDuc on the tight, twisting track. That pressure paid off late, when LeDuc hooked a rut on turn five, twisting his truck into the air just in front of Greaves. It was the opening Greaves needed, as he didn’t miss a mark on his way to his first win of the year.

Johnny Greaves, who is on a quest of his own to join LeDuc in the century win club, was able to move up one podium spot to finish second ahead of Jimmy Henderson, who picked up his second podium of the year. Despite getting put to the back on the restart after his crash, LeDuc almost made it back on the box, as he tried to find any line that would work to get around Henderson, who didn’t back down and held on for third.

Kyle Kleiman was wondering how the Dirt City track was going to play out heading in the Pro 2 showdown. After winning round two at ERX, he was ready to go head-to-head with defending class champion Keegan Kincaid in Lena.

Mickey Thomas set fast time in qualifying but pulled a six for the invert. That put him in the third row next to Kincaid, and one row behind Kleiman. The slight separation was all Kleiman needed, as he got around the leaders quickly, and set the pace in what turned out to be an eventful Pro 2 race. Known as a closer, Kleiman lived up to the billing. He ran the fastest lap time on lap 11, a blistering 52.436 seconds. It gave him enough separation over Kincaid, who had to work his way through the crowd and didn’t get into the runner-up spot until lap seven, when he got around Thomas.

Zachery Kirchner took advantage of his front row starting position to run towards the front for the majority of the 12-lapper. After finishing outside of the top five in both ERX races, Kirchner found an extra gear late in the race, running his fastest two laps on the final two laps to finish third. Thomas was unable to finish after a mechanical issue dropped him out of the race.

Much like his second round win, Greaves had to work his way from the back after he pulled an inversion number of six, putting him in the third row for the ten lap showdown. Directly ahead of him was the 44 of John Holtger, who wasted zero time getting out front. Holtger made some great adjustments after qualifying, finding more than a second per lap in the final. He held point for three laps, before Greaves got through the mess. Holtger came in a bit too hot to one of the tight turns and biked on two tires. Greaves took advantage and opened up a solid lead through the finish for his third straight win.

Holtger was able to regroup and ran consistently fast laps for the final six laps to finish second. Chad Rayford made his return to Pro Lite a success. Rayford missed the first two rounds but showed-off his hard-charging style to finish third.

In Pro Mod SXS qualifying, CanAm’s Kyle Chaney set a pace that was only bested by the Pro 4 class. He was able to start on the front row, next to Yamaha’s Rodney VanEperen. The two were just .2-seconds apart, setting up a spectacular race Saturday afternoon.

VanEperen drew first blood, shooting out to a lead that he would hold for the first two laps. But Chaney was in pursuit from the word go and was able to get around and hold point for the next five laps. A spin on lap eight would take Chaney out of contention, and re-open the door for VanEperen. From there, the veteran drive roared to his first win of the new season.

Polaris’ Andrew Carlson made several charges at the leaders and was closing the gap on VanEperen over the past few laps. A bobble on the last lap, however, opened the door Luke Stubbs. The local boy from Green Bay came through the back and was able to capitalize on the last lap glitch from Carlson to finish second.

In Pro Stock SXS, it was another Yamaha, and even another VanEperen that factored in the outcome. CJ Greaves is pulling triple duty this year, running in Pro 4, Pro Mod SXS and now Pro Stock SXS.

In Lena, Greaves made it three-for-three this season in Pro Stock SXS. Greaves qualified first in his session, which meant he started in the second row next to Rodney VanEperen’s son Owen, who was fastest in his qualifying session.

Jack LeTourneau held point for the first three laps before Greaves was able to skirt past. A few laps later, VanEperen squeaked by. After that, any changes in the running order happened outside of the top five as Greaves and VanEperen led LeTourneau to the checkered flag.

The 1600 Buggy continues to be one of the most competitive races in Championship Off Road. Craig Paitl controlled the race for the first two laps before John Fitzgerald took the lead on lap three. Fitzgerald sat fifth after the first lap but took advantage of a close race between the top five. With lead changes in front of him and position swaps behind him, Billy Buth finished second ahead of Dylan Parsons.

Nick Byng made an impressive run through the Super Stock Truck field. After starting ninth, Byng took the lead on lap five on his way and worked out front for the remainder of the race for his second win of the year.  Trey Beauchamp led the race for the first four laps before giving way to Byng. Kyle Cooper finished third.

Michael Hester was fastest in practice in Friday and that speed carried over into Saturday’s Pro Buggy race. Hester diced with Chris Van Den Elzen for the entire race, with Van Den Elzen leading the way for the first three-and-a-half laps before Hester took control of the eight lapper. Mike Kirkham finished third to round out the podium.

Racing continues at Dirt City on Sunday with round four of the Championship Off Road series. Qualifying begins at 9:00 AM Central, with race action starting at 10:00. Follow all of the action via livestream at www.champofforad.com