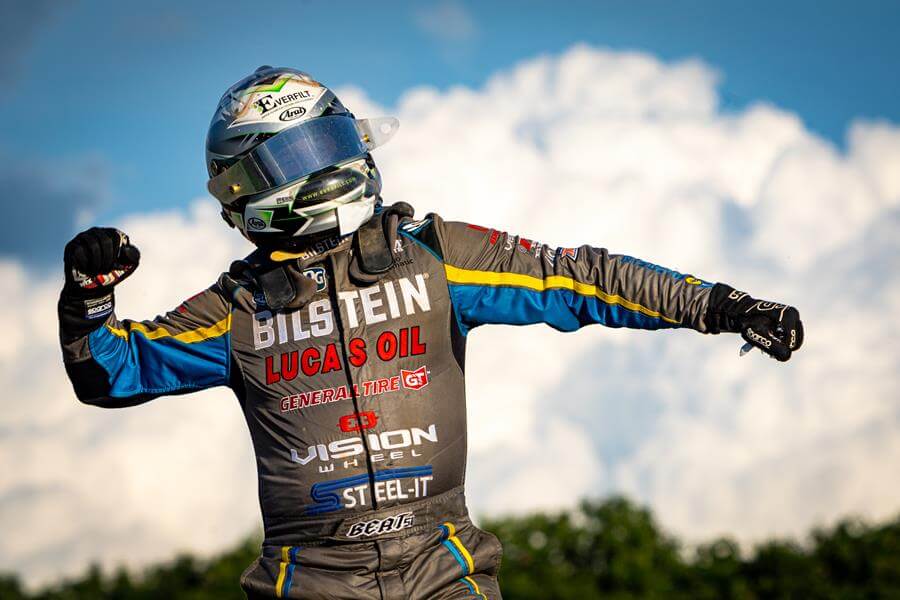 Elk River, Minn. ~ Round six of Championship Off Racing at ERX Motor Park was a tone-setting, second half look at what the final four rounds in September will provide. Fast action, go-for-broke racing and drama that will fester until the next green flag drops.

Greaves Comes Away With Weekend Sweep​

The mantra of Pro4 this weekend was “Hold On”, as it was another wild ride for the fastest trucks in short course tried to tame the one-mile track laid out at ERX Motor Park. From the jump, it was Andrew Carlson out from and setting an extremely fast pace. He utilized his local knowledge and transferred into a textbook lesson on how to get around the rugged ERX track. Lap after lap, with past champions like CJ Greaves, Kyle LeDuc and Johnny Greaves breathing down his tailpipe, Carlson held point.

But the ERX harkened the days of old, getting more and more gnarly as the laps ticked away. When a full field of 900 horsepower trucks digs into a track, it begins to swallow up trucks, bust open fiberglass and knocks down tires. That was the case for Carslon, who was close to his first win in 2020, but a flat tire on lap 11 took the #15 off the track.

That opened the door for two Monster’s, as both Greaves and LeDuc were entrenched in a battle behind Carlson. LeDuc had to work from the back after getting shuffled away from the front on the second lap. The three time winner this season went on a crazy ride trying to get back to the front. He worked his way around Johnny Greaves, who also left with a flat tire before finishing fifth. After that he made it around CJ Greaves, but Greaves quickly returned the favor, passing LeDuc at the same spot he made the pass on Saturday on his way to his second win of the season.

With less than two laps to go, a flat started forming on LeDuc’s front tire, and even with the foot flush to the floor, he was unable to catch Greaves again, who motored home to a five second win. Adrian Cenni continued to find his pace and put in the best finish of the season in third.

The Right Beat in Pro2

On Saturday, Ryan Beat was straight up fast. He nearly moved through the entire Pro2 field, starting 16th and finish third. On Sunday, he left no doubt that his early season hiccups are behind him as he cruised to his first win of the season.

His start on the pole meant he could grab clean air after the first turn, thus leaving points leader Kyle Kleiman, Keegan Kincaid and Mickey Thomas (all event winners this season) to battle it out for the final two spots on the podium.

That battle took a few laps to form, and it came in part with all three drivers, but in reality, it was Thomas and Kleiman digging their tires in towards one another. On lap 13, after several laps of close racing, the pair rotated towards the right handed up hill section that leads towards the final two turns. With Kleiman leading, Thomas was right in his roost. The two became tangled, and when they separated, Kleiman had spun off the race line, giving Thomas a clearer track for the next lap and two turns. The contact also allowed Kincaid an opportunity to slip by, and left Kleiman in fourth.

That running order stayed true through the final lap and was celebrated on the podium. Race officials review of the incident, however, overrode those finishing positions. Kincaid would move into second, with Kleiman getting third place points and Thomas receiving a two-position penalty for the infraction.

After four wins to the start the season, Kyle Greaves ran into a Buzzsaw named Carson Parrish on Saturday. On Sunday, Greaves returned to the forefront, but a trio of drivers kept the points leader honest.

From there, Parrish quickly tracked down Greaves, showing great control until lap eight when he overstated coming out of the big sweeping turn three. That allowed the three trucks to get past him, before he was able to regroup and finish fourth. Prater didn’t let the position losses affect him, two laps later he moved back into third, and on the last lap he overtook Holtger for second behind Greaves.

Yamaha’s CJ Greaves and Polaris’ Andrew Carlson put on an epic battle in the Pro Mod SxS race on Saturday, with Carlson notching his first win of the year. For much of the race on Sunday, it looked like the battle was going to continue, but this time it was Greaves holding the upper hand. Greaves and Carlson set a blistering pace from the get-go. It was a series of great starts for Greaves that gave him the early advantage, and also led to his third class win of the season. Carlson was on Greaves bumper for the first half of the race before a rear flat tire forced him into the hot pit.

After that, Greaves would have to keep Can AM’s Kyle Chaney and Yamaha’s Rodney VanEperen in his rear-view. Chaney and VanEperen were busy swapping spots as the leaders were doing the same, with VanEperen holding the edge. A restart forced a one-lap shootout for the win, and Greaves nailed the start and motored to the win. VanEperen never game up the second place spot he held for the final three laps and Chaney came across the stripe just .284-seconds behind VanEperen.

Jeremy Houle has pushed his Textron to the limits at the past several events at ERX. This includes on Saturday when the local Pro Stock SxS driver lead for much of the race before a he had to pull off after getting tangled up with his teammate. Houle was looking to finish strong on Sunday, and he was able to do so thanks in a large part to how he started. With several restarts, Houle consistently got the drop on his main rival CJ Greaves. While the two would swap spots and challenge one another on several occasions, Houle was a rocket ship off the restarts, putting him in the right spot to pick up the win. Greaves (Yamaha) and Jason Luburgh (Polaris) rounded out the podium.

Ryan Schwalbe was looking for his first career win in the Pro Buggy class on Sunday. To get it, he had to get past Saturday’s winner and points leader Michael Hester, who has 97 career wins. Schwalbe had something for Hester over the final few laps, but with two laps to go, Hester picked up the pace and win number 98. Mark Steinhardt finished third.

Carson Greco won his third 170 SxS race this season with a great race on Sunday. Raymond Deininger finished second, inching closer to points leader Ellah Holtger’s overall lead. Holtger finished third. Josh Bayer used a great starting spot and fast lines to secure his first win in Sportsman SxS this year. Dylan Marquardt held off a hard-charging RJ Lego on the last lap to finish second. Lego started the race in 16th, and made it as high as second before crossing the line in third.

Sunday’s Super Stock Truck race turned into aa race of survival for the heavy duty trucks. At the end, Nick Visser picked up his third straight win. Just behind him was a battle between the class points leaders, Joe Maciosek and Kyle Cooper. Copper, who set the fastest lap of the race, didn’t have enough to get past Maciosek at the line, missing out on second by just .107 seconds.

1600 Single Buggy points leader Billy Buth was riding smooth in front of the pack before a puff of smoke with two turns to go made for a tighter than expected finish. Buth was able to hold on for the win as Craig Paitl (2nd) and Dylan Parsons (third) tried to catch the now three time winner at the line. TJ Ewert ran a flawless race to pick up his second Sport Truck win of the year. Current points leader pushed hard, finishing third, just behind Travis Peterson as the two diced through the final few turns of the eight lap race.

Greg Stingle worked the blazing orange 172 to a large, early lead in the 1600 Light Buggy race on Sunday. The veteran racer was challenged by defending class champion Billy Buth in the second half of the race, but Stingle was able to keep him at bay to become the sixth different winner in the class this year. Tyson Marquardt finished third. Sam Marquardt had his sixth Mod Kart win of the year in his sights but a mechanical issue forced him to the sideline on the last lap. That opened the door for Easton Sleaper, who held off all challengers, including Zack Wirhanowicz and Michael Funk who finished second and third, respectively.

The Short Course Karts fight came down to the last turn as Elk River, Minn.’s Tristian Hinton was able to hold off Andy Johnson. Hinton was able to extend his overall points lead, which was four entering Sunday. Danny Beauchamp picked up his sixth win in six races by winning Sunday’s Formula 4×4 class race. Nick Bing filled in nicely for Dale Chestnut in Classic, picking up a convincing win.

The Championship Off Road series heads to Crandon, Wis. on Labor Day Weekend for three days of racing. All classes from all events are streamed live on www.champoffroad.com.