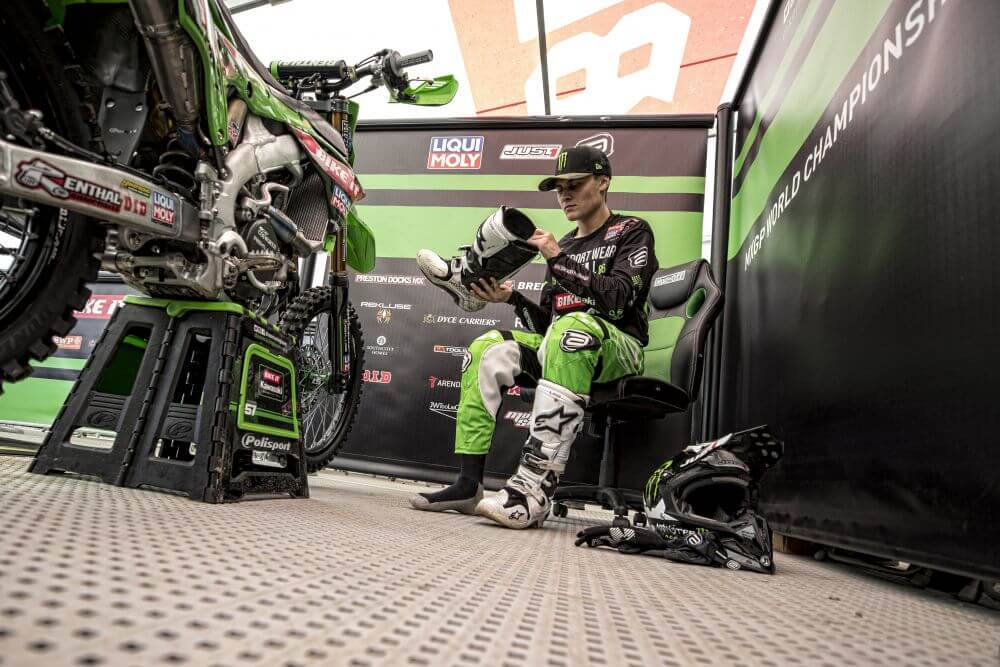 Darian Sanayei the hardest working man in motocross? Maybe. Just maybe. Beginning with the 2020 MXGP of Argentina last March, Sanayei, straight out of Monroe, Washington, has globetrotted Planet Earth to compete on his Kawasaki KX250 and KX450 race bikes. “Yeah, so I did one year, 2016, in the European MX Championship and then I raced in the FIM Motocross World Championship in 2017, 2018, and 2019,” pointed out Sanayei this Saturday afternoon in Murrieta, California where he was waiting out the coronavirus clampdown. “So I was in Europe for four years and in the GPs for three years. After the MXGP season was finished in September, I came back to America this winter to race Arenacross and some Supercross and I’ve been here since” And Sanayei fared quite well in the hockey and basketball arenas of this nation. At the final round of the AMA Kicker Arenacross Series in Amarillo, Texas in March, Sanayei lost the 250 Pro Main by an eyeblink of a margin of 0.097 seconds and then bounced back to win the 450 Pro Main. East Region Supercross races were also a part of his ’20 racing masterplan, but a few crashes and the coronavirus pandemic have put Sanayei in a holding pattern. Now aged out of the MX2 World Championship classification at 23, Sanayei is quite keen to get back to racing here in the United States of America as he’s hoping to land a ride here for 2020 and beyond. A racer in every sense of the world who will show up and compete with anyone, anywhere and at any time, don’t ever count the gritty and determined rider out.

What’s up, EJ? How you doing? Yeah, I’m pretty good. Just trying to stay busy, you know? It’s getting hot out.

Yeah, definitely here in California. I mean right now today it’s almost 100 degrees, so it’s no joke. I’m going cycling and stuff a lot right now and I’m trying to go early in the morning to cut out the hottest part of the day.

What else have you been up to during this lockdown wall-hit?

I’m trying to ride as much as I can. It’s a little bit difficult with the bike situation and stuff. I don’t have all the equipment and stuff that I need, but I’m trying to get by with what I have right now. I had a couple little issues on my bike, so I was getting those taken care of. Yeah, I’m just put my head down and try to get ready once racing gets started back up again.

So you’ve been able to get out and ride your motocross bike, huh?

Yeah, I’ve been out on my motocross bike. I try to do at least three days a week and then just doing a lot of road biking as well.

Training, riding and staying in good shape, but likely not wanting to be at peak, optimal condition just yet, huh? I’m imagining we still have some time to go before the racing coast is clear and you guys can get back to it, eh?

Yeah, definitely. I think for me just the biggest issue was the Epstein-Barr that I had last year and then coming back and racing and everything, I just need to get a good foundation, you know? My body, I just need to get it back to be able to be ready to race whenever. I need to build my base. This break I feel like, for me, has definitely been good. Obviously, everybody wants to be racing and everybody wants to be out there and so do I, but I’m trying to look at the positives and to utilize the time to try and get better in the stuff that I was lacking when I was out racing.

Okay, so the last time you raced and or competed in a series was when? I mean it’s a backhanded compliment that you’ve been racing all over the world in the past year, huh?

Yeah, I did the Kicker Arenacross Series and the last race there was back in early March. I won the last round and ended on a good note, at least. From there I was just going to train for the rest of East Region Supercross and then everything just kind of stopped because of the virus stuff. But yeah, I was doing the Arenacross championship and then during all of that I kind of got injured. I had a crash in practice and I dislocated my shoulder, so I had to take a few weeks off. I did a few more rounds and as I was coming back I went to do one of the East Region rounds at Texas and I was right on the bubble qualifying and didn’t make it. From there, I went to the LCQ and I was racing in that and in qualifying position but me and another rider crashed together on the last lap, so I didn’t make the main event. From there I just trained and did the last two Arenacross rounds and I had wins in both of those. Not long after came the coronavirus and everything kind of got stopped and I came back to California.

Okay, The MXGP World Championship, Kicker Arenacross Championship and Monster Energy Supercross all in the span of a year. Man, how do you compare those three disciplines and their surroundings?

It’s all definitely different, for sure. I think for me as a racer, it’s not really all to compare, but just put my focus on whatever I’m doing. Whatever I’m doing, I put myself all into that to be the best that I can be. Obviously, I have more experience in Grand Prix and I now have a little bit of experience in Arenacross and really no experience in supercross. I’m just trying to get fast on what I’m going to be racing that year.

It’s admirable to me that you’re racing in all three of these disciplines to try and both make a living in the sport and to try and find a home for 2020 and beyond. You’re giving it all you’ve got. That’s saying something.

Yeah, I mean definitely I knew where I was at in supercross. I was learning it and it was coming around, it was just a lot slower than I had hoped for, so I just think it is more of an experience thing and just kind of getting that fitness in supercross and that rhythm and that speed just to connect everything a little bit better together. I feel like that once I get that, I should have a good chance in doing well in supercross. Looking back, everything in Europe was just completely foreign to me. It was kind of mind blowing to me with how the fans were and how many people were there and just the whole format and everything. I got used to it with being over there for four years  and I enjoyed it and I liked it a lot. And Arenacross was definitely interesting as it way tighter racing and everything was way closer together and everyone was banging bars a little bit more. Yeah, two completely different things. You’re still on a dirt bike, but everything is completely different. I enjoyed it and had a good time and got used to it and got better toward the end of it, which  was good. Now I’m just going to try and transition my mind for supercross. I still don’t have that feeling for racing under the lights in supercross yet.

If and when we get back to racing, be it in a stadium or on an AMA or FIM track, where are you going to place your focus?

Yeah, for me, it has definitely been kind of up in the air. I don’t have a ton of support and I’m trying to land on a good team at this point. Right now, I have been thinking that my main focus may be on motocross because I didn’t know if supercross is gong to happen for the rest of this year. I may focus on motocross because I know that I’m good at that and I know that I can do good. I want to try and perform well so that I have something for next year. I’m juggling a few different ideas, but I do know, for sure, that I want to be out there and racing whenever I can and I want to be the best that I can. I’m just trying to train and to keep my head down and work on the things that I need to work on and if something opens up somewhere, hopefully I’m able to get that.

Well, you’re putting your chin out there and you sure as hell aren’t afraid to put in the time and work to try and make it happen. Awesome, dude.

Yeah, for sure. I mean I had to kind of drop all the being scared to fail kind of mindset right now. I still believe in myself and that’s why I’m still doing it. I don’t have much experience in supercross, but I still believe that I’m good. I just want to get out there and perform.